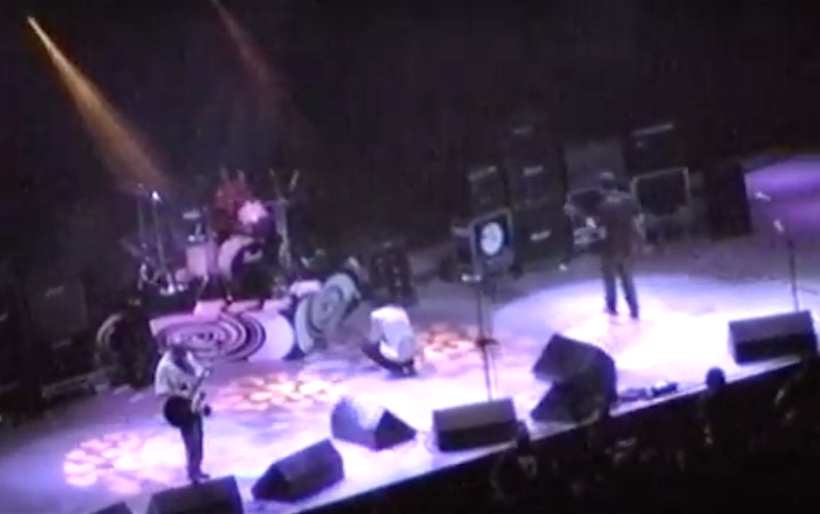 Watch Oasis play the first-ever show at the CoreStates Center on September 2, 1996

In the 90’s, The Spectrum gave way to a bigger and better (?) South Philly arena initially known as the CoreStates Center. This name lasted two years before it became the more Philly-centric First Union Center (“Yo, FU, get it?”) and is now the Wells Fargo Center.

Its first proper concert, held 20 years ago today, was a lineup of Manic Street Preachers, Screaming Trees, and a band “breaking the States” called Oasis. I did not attend this show; had I gone, my obsession with Oasis probably would have been much more short-lived. I was intensely into Oasis; Liam Gallagher seemed like the best guy ever. I owned all of the important bootlegs, books, singles, and t-shirts. I belonged to the newsgroups, message boards, got mad at anyone who “slagged off” the Gallagher brothers. The whole lot, mate. Needless to say, when I read this review from Tom Moon in the Philadelphia Inquirer, it was upsetting to me. Moon mocked Liam being frustrated with having a sore throat — sore throats suck, what did this music critic know of such things? Liam’s attitude was Oasis, maan!

A few years after this, I did see Oasis at the First Union Center and Liam pretty much pulled the same nonsense. Seeing his “will he be bothered to perform or not” act in person is in fact frustrating, and the performance was mediocre. I gave them one more chance when they played the Tower Theater and it was clear to me the emperor had no clothes.

Watching the inaugural CoreStates Center show in the YouTube clip below, the band is only two albums into their career and appear to be bored out of their minds. They go through the motions, playing most songs exactly how they sound on record. Liam injects a silly aside now and then but the rest of the band avoid eye contact with everyone around them. One could claim they were residual participants of the shoegaze movement, but nah, that’s not it.

On the positive side, Liam does sound pretty good for being sick. (Or is it “sick”? The guy also dropped out of MTV Unplugged around the same time for the same reason but mysteriously showed up in the balcony of the venue anyway, and reportedly almost sat out tour so he could buy a house.)

Noel starts lighting up more once Liam gives up on trying, playing “Wonderwall” and others acoustic. The setlist is solid; with the humdrum Be Here Now still a year off in the distance, the band plays a wonderful helping of songs from their first two (and best) albums, Definitely Maybe and What’s The Story, Morning Glory?. It also plays an early version of “It’s Getting Better (Man!!),” one of better moments on Be Here Now. And the entire thing closes with a Beatles cover. Regardless of the vibe, the concert should be an enjoyable and nostalgic watch for fans — the vibe was Oasis, after all — and hey, they do “Listen Up,” so that’s cool!

I also have since put aside my one-sided differences with Tom Moon. He’s a great critic and seems like a stand up guy.

Acquiesce
Supersonic
Hello
Some Might Say
Roll With It
Slide Away
Listen Up
Morning Glory
Cigarettes And Alcohol
It’s Getting Better (Man!!)
Champagne Supernova
Whatever (Noel acoustic)
Cast No Shadow (Noel acoustic)
Wonderwall (Noel acoustic)
Don’t Look Back In Anger
Live Forever
I Am The Walrus (Beatles cover)