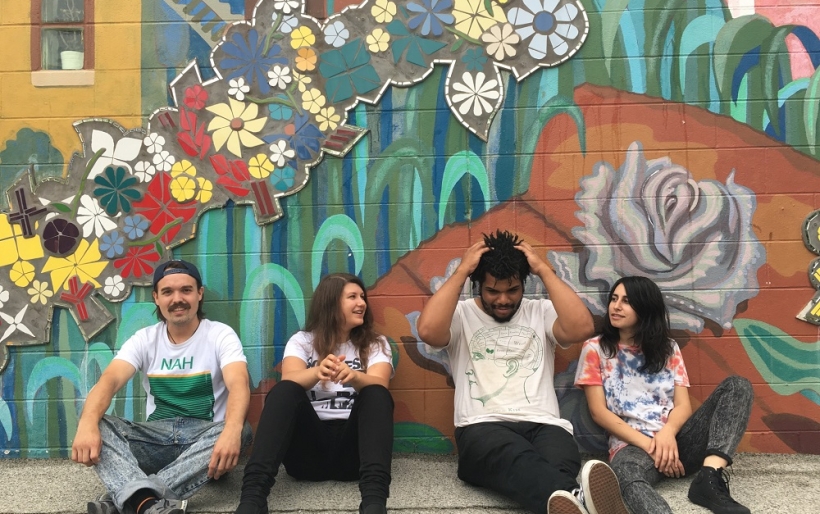 Mannequin Pussy | photo by Sam Rudich | courtesy of the band

On the heels of last month’s “Emotional High” single, local outfit Mannequin Pussy have shared another new track from their forthcoming sophomore LP. Posted on NPR’s Songs We Love feature, “Romantic” comes crashing through the gates in a deluge of guitars and drums before dropping down to a jarringly softer verse led by singer / guitarist Marisa Dabice’s superbly expressive vocals.

Underneath the band’s instrumental muscle is Dabice’s surprisingly vulnerable poetry. In Romantic’s title track, her voice reaches, pleads, yearns through sickly-sweet declarations (“I get along with / everyone I meet / I’m so sweet”) before cracking with sheer, brutal frustration (“Stop taking this s**t out on me”). Elsewhere in Mannequin Pussy’s discography, Dabice’s voice has been impressive in its ability to match the commanding rage of bruising punk guitars and thrashing drums; even when she sings pop hooks, there’s nothing bubblegum about it. But in “Romantic,” Dabice shows she’s equally adept at letting the tenderness of her lyrics bleed into her delivery — even if just momentarily. This is a love song for letting your guard down before losing your mind when that process inevitably screws you over. Romantic indeed.

Listen to “Romantic” on NPR and catch Mannequin Pussy at The Storefront in North Philly on September 18th and PhilaMOCA on September 30th. Romantic is out via Tiny Engines on October 28th.