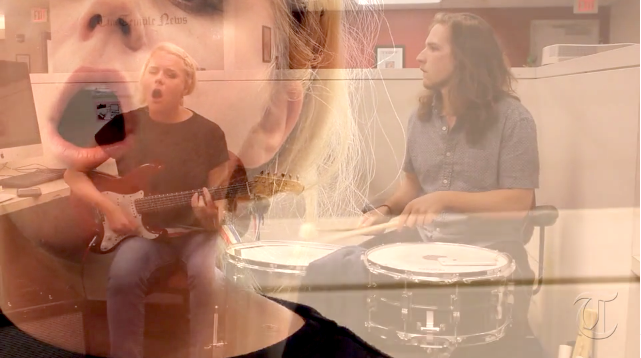 Vita and the Woolf | still from video

By John Vettese
September 06, 2016
05:09 PM
Share
Vita and the Woolf in The Temple News offices | still from video

Philly modern rock outfit Vita and the Woolf just had something of a back-to-school moment. The band’s core duo, Jennifer Pague and Adam Shumski, are both alums of Temple University, and they traveled back up North Broad this week for a visit to The Temple News offices.

The editorially independent, student-run news organization produces an occasional Tiny Desk-esque video series called Hear All About It where Philly musicians perform in their offices – in the past, it’s featured Open Wide, Hungry Ghosts and Chelsea Reed and the Fairweather Five.

For the Vita session, the band took a new approach to the song “Mary” — and its songs in general. Pague swapped her red Nord keyboard for a red Stratocaster-style electric guitar, giving the pop anthem a bit of fuzz-rock grit – think Bully, think Mitski. Joining her behind a minimal two-drum setup, Shumski keeps a brisk marching beat.

From what we’ve heard of the band’s new Tunnels LP, this is not exactly an indication of a new sonic direction – the record is soaring and soulful electronic pop, which Vita and the Woolf does expertly – this is just an interesting re-invention in a scaled back setting.

The video was paired alongside an interview with The Temple News‘ Grace Shallow. You can read that here, and get tickets and more information on Vita and the Woolf’s October 6th show at Boot and Saddle with Mal Devisa and Square Peg Round Hole at the XPN Concert Calendar.