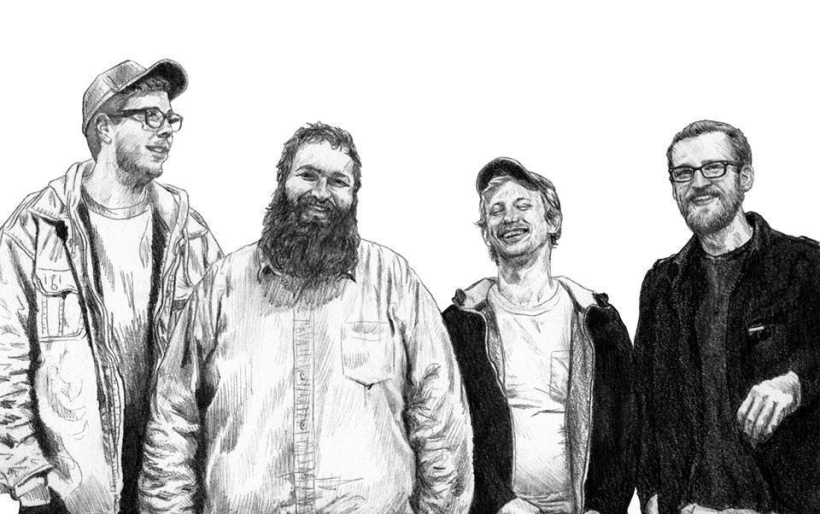 Left & Right | Illustration by Jess Cavaluzzi | courtesy of the band

PREMIERE: Left & Right wrestle with heavy things on The Yips

After teasing it with singles for the last several months, Left & Right are finally letting us hear the The Yips in all of its angular and heavy glory. The LP follows 2014’s Five Year Plan release with a collection of songs that dig even deeper into the psyche of its songwriters, tackling the things that weigh heavily on their minds. It’ll be out September 16th via WarHen Records (a preorder is up now).

As you’ll read below, much of the album’s material came out of a feeling of helplessness in a world that seems to be spinning out of control on both personal and global scales. Working again with producer Justin Pizzoferrato (Dinosaur Jr., Parquet Courts), the panicky, frenetic emotions are translated into a sonic landscape that lays it all out there. The frustration, the defeat, the dreamlike calms and the jolts of motivation filter through correlations of melody and percussion that mirror the songs’ inner battles.

“With this record more than the last, we wanted to challenge ourselves as songwriters and performers. We tried to write a little beyond our abilities, messed with song structures, used alternate tunings, tried new things vocally, and focused heavily on dynamics. We tried to make the quiets quieter and the louds louder. We also wanted to get weird without abandoning our pop sensibilities. We spent a day longer in the studio than the last one, which allowed us to mess with sounds and extra fun stuff to make the record cool.

There’s a lot of dreaming and escapism as a means of dealing with larger dominating external forces on the record. And a lot of “And then I woke up” moments where reality sets in again. A sudden and unexplainable loss of agency seemed to pop up a lot in these songs, which is why we went with “The Yips” as a title. I hear a lot of struggling to become acclimated to the fact that there are a lot of questions that no one really has a good answer to.”

The Yips also marks another chapter for Left & Right: after their upcoming tour ends, drummer Zak Krone will be parting ways with his bandmates of six years. Read the announcement over on Facebook and stay tuned from more from his own Bruise Bath project.

Stream The Yips in full below, and celebrate the record on September 16th when Left & Right play Everybody Hits with Friendship, Sneeze, and Horsecops. More info for the all-ages show can be found here.