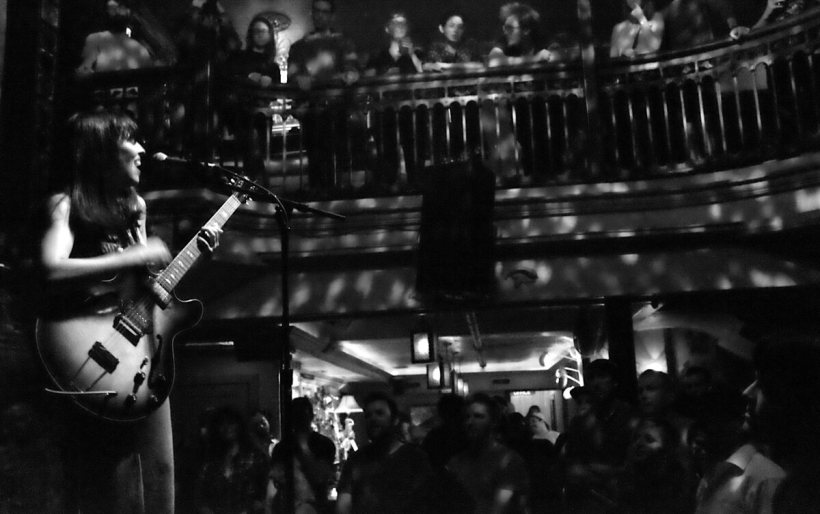 Frances Quinlan of Hop Along | photo by John Vettese for WXPN

Each artist on Monday night performed at least one cover, with Frances Quinlan of Hop Along playing three in her knockout solo set. There was a rendition of the soaring “Carry the Zero” by 90s indie rock icons Built to Spill – a song Quinlan has covered a few times in the past, and an ever apt one as her band hits the road for a fall tour with Doug Martsch and co. – and she also played “Cold-Blooded Old Times” by Bill Callahan, one of her favorite songwriters.

But the real treat was an aching version of “The Hills” by The Weeknd. Quinlan has been known to dig into the pop charts from time to time — I’ve seen her do a great La Roux — and taking the song down to a fierce electric guitar and her voice was a terrific reinvention. Watch it below, care of Philly concert videographer Markit Aneight.

Hurry played a set mostly showcasing their awesome 2016 record Guided Meditation, then dug into the power pop archives for Wreckless Eric’s “Whole Wide World.” Watch it below – they wear it well.

Mikey Cantor took the stage billed as The Goodbye Party, but also mixed in songs from The Afterglows, his great new project with Sam Cook-Parrot of Radiator Hospital. And then there was a delicate take on Jonathan Richman’s “When Harpo Played His Harp,” which you can watch below.

Tuesday night, by comparison, was a bill of impressionistic and immersive psych rock with Bardo Pond headlining, while Birds of Maya and a solo Chris Forsyth kicked ass earlier in the night. Watch vids from Birds and Forsyth’s sets below.

You can find many more videos from these shows (plus a treasure trove of Philly live music history) by checking out Markit Aneight’s YouTube channel.