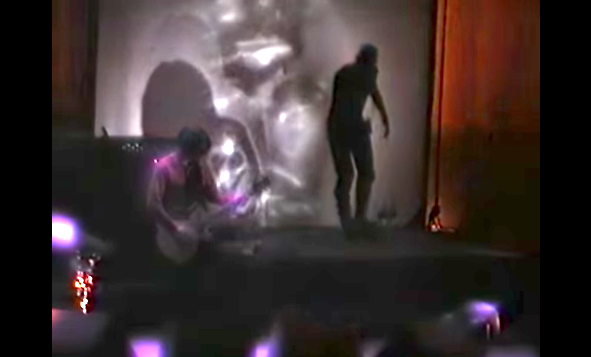 Tool in Philadelphia | still from video

Create Something Positive: Watch Tool perform at the First Union Center in September 2001

Fifteen years ago this month, the world was – to say the least – a stressful and scary place.

With the September 11th attacks in New York City, Washington D.C. and central Pennsylvania fresh in everybody’s minds and no certainty about where the hell the future was pointing, fans of the progressive metal band Tool flocked to the sports complex at Broad and Pattison for a concert on September 27, 2001 — for many, their first concert since witnessing endlessly looped news footage of two hijacked planes flying into the World Trade Center.

It’s safe to say some people in the sea of 15,000 fans were directly affected by the attacks; numerous locals worked in either New York and D.C. themselves, or have family who did. Maybe they lost somebody on 9-11, or maybe it was simply that their proximity was immediate and horrifying. For others, the impact was more one of remove; they were only affected in that they watched it unfold on television, their feelings were more empathy and fear and nervousness of the world around them. In either case, everybody in attendance that night sought some degree of musical healing and catharsis — and not of the sappy, Hallmark-ed out, exceedingly patriotic sort that had been spilling from the various benefit telecasts for the previous two weeks.

They wanted to scream. And Maynard James Keenan and co. allowed them the space to do so.

Tool was, arguably, at the peak of their fame and creativity at this point. They were a big enough band that they were headlining an arena, dressing the enormous stage with tapestries and LED monitors projecting nervy, skittish and macabe footage compiled under the art direction of guitarist Adam Jones. The performance art duo Osseus Labyrint — yogic contortionists that often appeared in the band’s music videos and artwork — joined them on stage, walking on all stilted fours while snapping their necks to and fro. They used an intermission to latch on to two drapes hanging from the rafters and shimmy all the way to the top, in the lotus position the entire time, where they hung and swung during “Parabol / Parabola.” (My friend Greg turned to me at this point of the concert and said “Adam Jones has some interesting friends.”)

Earlier that year, the band had released its third LP, Lateralus, and were there any doubt that these Los Angeles grunge-adjacent metal mystics were now a full-blown prog band, the run-times on the songs (from the seven-minute single “Schism” to the 11-minute “Reflection”) laid them to rest. What made Tool’s approach to prog stand out was that it wasn’t a wanky show of technical skill like you see in the prog bands of the 70s. Okay, fine, Danny Carey’s drumkit is maybe a bit redonkulous. But for the most part, Tool used their epics to create a mood, take audiences to dark and murky depths and channel their collective energy (as a band, as a crowd of people in a room) into something transformative.

This is something Keenan directly addressed in his closing remarks before diving into a 12-minute take on the album’s title track. He’s normally not much for words, but at this show, he felt the need to speak:

Please travel safely, and in your travels, we have a suggestion. Hang on to this feeling you’re having right now. Whether you’re having a good night, a bad night, an indifferent night. Just try to remember this feeling and in the coming weeks use that feeling to create something positive.

People certainly interpreted that message in different ways. But it resonated, and was impactful. I was studying photography at Temple at this point in my life; I walked out of the arena worried that my shoulder bag of prints and contact sheets and negative sleeves and textbooks was still outside the venue, stashed beneath the trash can where security directed me to hide it. This was what a weird place the world was in the weeks after 9-11: venue security guards were under such stringent no-bags-inside regulations that they told me, if I didn’t have a car to lock up my bulky-ass, tattered satchel, I could leave it under a trashcan — something would totally not be okay in the color-coded-threat-level years that followed.

With the show still ringing in my ears, I circled the venue till I found my bag. I was in the habit of carrying pretty much my entire life around on my shoulders, and I was relieved to find my life, as it were, was completely intact.

Below, watch video of the entire concert care of YouTube rockstar Markit Aneight, and read the setlist.