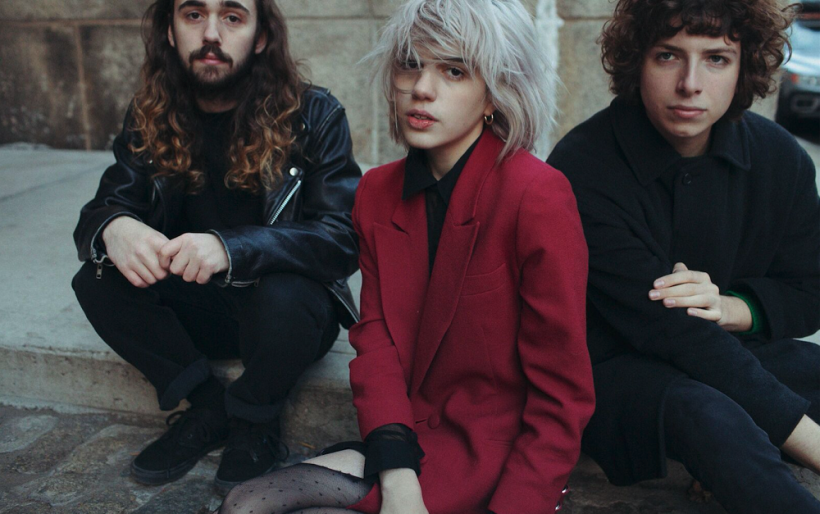 Sunflower Bean | photo by Rebekah Campbell | courtesy of the artist

By Nikki Volpicelli
October 03, 2016
08:10 AM
Share
Sunflower Bean | photo by Rebekah Campbell | courtesy of the artist

“We’ve spent countless hours watching videos of early Sabbath playing live, and I think that has really rubbed off,” Jacob Faber says about the way his Brooklyn psych rock band Sunflower Bean performs. “They have this amazing raw energy that I think can only be achieved by being the bare bones of a rock band: one guitar, one bass, one drummer and vocals. There is something so primal about their performances.”

Since 2013, it’s been the three of them (and their manager, Crista Simiriglia) navigating a hectic multi-country tour schedule, festival circuit and the release of two records: 2015’s Show Me Your Seven Secrets EP and this year’s full-length, Human Ceremony, put out by Fat Possum.

We spoke to Sunflower Bean, who just played NonCOMM last spring, ahead of their October 8th show at The Foundry, about how groups like Television, Suicide, The Velvet Underground and Sabbath have inspired them to be a band (and one that’s this close to adding puppies to their rider).

The Key: Can you talk about the last time you played Philly and how things have changed since then in terms of your live show?

Sunflower Bean: The last time we had a headline show here was in March at Kung Fu Necktie. It sold out beforehand and was a pretty special show for us. We had been on the road for a little while at the point and it was the last show before [we got] home, so it felt very celebratory. Between then and now, we’ve added a couple older songs to the set to change it up. We’ve also played a hundred shows (literally) since then so hopefully we’ve gotten tighter. Ha!

TK: If you could identity with one long-forgotten New York or East Coast scene, what would that be?

SB: I don’t know if it’s really been forgotten, but we’d probably identify with the post-Velvets New York City in the early to mid 70’s, when all of this really cool proto-punk was happening. That era seems to not have such a name for itself in particular, but when you look at the bands coming out of New York at that time like Television and Suicide…there was something in the water.

TK: Are there bands you as a group look up to who have gotten better with age, or do you tend to lean towards the earlier work of your influences?

SB: I think there’s something inherent about Rock ‘n’ Roll that makes people create some of their best work in their early 20’s. That being said, people like Jason Pierce from Spiritualized have just been getting better. Ladies and Gentleman was released in the 90’s and that is a proven masterpiece, but so is Sweet Heart Sweet Light, which came out in 2013. I think its important for musicians to try and progress if they want to have a lasting career. Lou Reed kept progressing and trying new things until he died, which is really respectable even if some of it isn’t his best work. I think it’s much more admirable than trying to recreate the past.

TK: How you portray your songs in videos is a very important aspect of your work. What do you think a fan can get out of a video that they can’t necessarily access through listening to a song?

SB: Making a good music video is one of the most difficult things for us. When we make them we want to portray the song in a way that is different from how it is live or on the record, and try to make something memorable.

TK: If you had to compare the first track you ever wrote and published to the latest, what would be the main difference?

SB: I think the first track we ever released was “Bread” and the last track we released was “Come On”. I hope to think that we have matured a lot in that time. I know for certain that when recording Human Ceremony we devoted a lot of time to songwriting and trying develop our songs rather than in the past, when we would just kind of jam and get these linear songs.

TK: What is it about your live show that you hope will drive people who may not be too familiar with your music to dig deeper?

SB: Hopefully when people see us they will leave with the impression that what we are doing is very raw and honest and it will drive people to want to know more.

TK: What is the most spontaneous thing that’s ever happened on stage or in the crowd at a Sunflower Bean show?

SB: Some guy threw a shoe at Julia in Manchester last week. I think it was in good spirits… This guy also tried to jump on stage to sing. It was just a weird way to show your support. So much crazy shit happens on tour, it’s hard to remember what stands out sometimes. But that kid in Manchester was ON ONE.

TK: Last time we chatted, we spent the last 20 minutes or so talking about and petting dogs. Has a handful of puppies made its way onto your rider yet?

SB: Haha! Yes! We got a dog recently. It was in Nottingham in the UK. We sold out the show and the promoter asked if we wanted anything special, and we were like, “YES a DOGGO”. A very cute good doggo to play with before our show!

XPN welcomes Sunflower Bean to The Foundry on Saturday, October 8th. Tickets and information for the all ages show can be found here.