Nothing Is Exclusive: Exploring the double-identity of Philly punks Mannequin Pussy and their new LP Romantic - WXPN

Nothing Is Exclusive: Exploring the double-identity of Philly punks Mannequin Pussy and their new LP Romantic
Artists

Nothing Is Exclusive: Exploring the double-identity of Philly punks Mannequin Pussy and their new LP Romantic

“You don’t need to feel tied to one sonic identity.” Those words, spoken by Mannequin Pussy vocalist and guitarist Marisa Dabice, echo what seems to be the central tenet of her band. “You don’t need to be one thing in order to be easily defined.”

The Philadelphia-based four-piece, which started as a duo of friends Dabice and guitarist Thanasi Paul in the early 2010s, releases its sophomore album Romantic today. Following the punk stomp of Gypsy Pervert (GP for short) — which was initially released in 2013 and re-released to greater distribution a year later — Romantic bears the fruit of its members’ expansive musical ethos.

Topping out just over 17 minutes, Romantic features 11 songs that defy genre definition while staying true to an aggressively genuine punk/pop approach. “Ten” is a furious one-minute punk blast with pure melody intertwined with vitriol. “Denial” splits the album in half with a jaunty bounce that accentuates the band’s more pop tendencies. “Everything” is all bashed drum fury and cathartic release. And “Beside Yourself” prominently features choral harmonies.

Part of the band’s expanded musical ideology can likely be attributed to the members’ varied musical upbringings. Dabice grew up on artists like Paula Cole and The Strokes, and was first introduced to punk by MC5. Paul benefited from a mother who bought him his first Sex Pistols album and turned him on to bands like Talking Heads and Sonic Youth, while also playing disco throughout the house while he was young. Bassist Colins “Bear” Regisford was raised in a house of cool jazz, house and trance music, Motown, and soul. And drummer Kaleen Reading, despite have a father who was a huge Jimmy Buffet fan, found the sounds of bands like The Clash both from scouring her local library and her older brother’s CD collection.

These days, Regisford says, “One minute we’re listening to Pantera and the next we’re all singing Mariah Carey. Nothing is exclusive.” Paul currently harbors a particularly idiosyncratic taste for contemporary country music, of which he says, “I don’t think it’s permeated my songwriting at all, but it probably has.” [Later, the guitarist admits that in a new song, “I was trying to sound like Slash but I think I ended up sounding more like Brad Paisley.”]

Since moving to Philadelphia in 2014, Mannequin Pussy has been thoroughly ensconced in the DIY music community, handling its own managerial duties and playing shows in dank basements and makeshift spaces, thrashing out songs as a three-piece before adding Regisford to round out their sound. With Romantic, the band finds itself garnering more and more attention, even warranting a recent mention in the vaunted Rolling Stone. As the band’s profile is sure to grow over the coming months as Romantic is released and the band heads on tour to support it, the dichotomy of being a DIY band and entering some level of increased mainstream exposure could seem a daunting thing to negotiate.

“I have thought a lot recently about the idea of business and DIY being these somehow polarizing and also unifying ideas,” says Dabice. “In order to do things yourself, you have to have enough — I don’t want to say savvy, because that sounds manipulative — but you have to have some business sense. How do you keep doing this thing that you want to do? A lot of times, for a lot of bands, that means being secure in the piggy bank you have that allows you to make the thing you want to make. It’s a forever cycle where everything we do goes back into the next thing.”

“I think everybody would love to just give everybody music for free, if they could get compensated in a way that it’s sustainable,” says Regisford in response to a question about one fan’s recent online comment about Romantic’s vinyl price point being, at $15-$17, slightly higher what their label used to charge for a typical LP.

Dabice is sensitive to fans’ situations, acknowledging that things are tight for a lot of people, but as a working musician, she also has to be cognizant of a landscape where it costs bands money out of their own pockets to make products that are desirable and held to a high artistic standard. 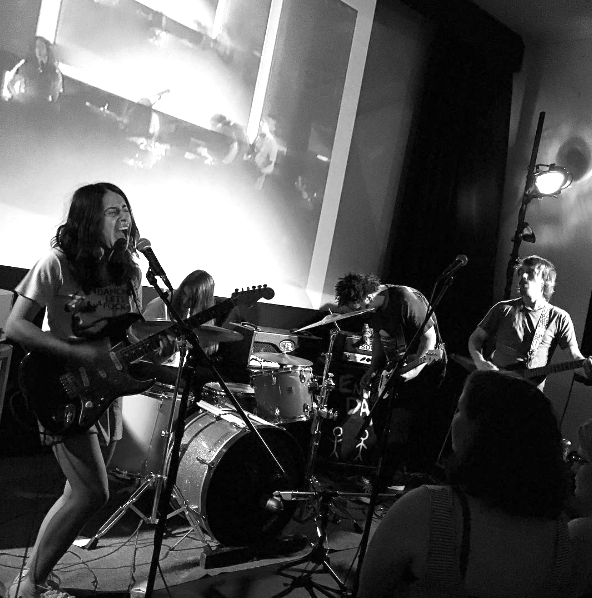 “In order to be DIY, you also have to be kinda business,” says Dabice. “In order to do it yourself, you have to do it yourself in a smart way. But also, I feel really good when I got see a band that I love, where I’ve been there and felt part of the experience. When I go to get something I really feel like I’m directly supporting them. There’s not a lot of ways that we spend money in this country where we feel directly connected to the person on the other end.”

Recording for Romantic started in February, over a week in Big Mama’s Recording Studio with Evan Bernard and Chris Baglivo. When Bernard and Baglivo, members of the Philadelphia band The Superweaks, went on tour, the album was put on hold for another two months before being finished. Paul says the time off let the band marinate on the ideas it had laid down. They experimented. The songs, as a result, evolved. Along with the addition of Regisford, which provided a new low end that allowed the guitars to both open up and stretch out, the band also was able to adapt non-traditionally Mannequin Pussy tunes into the fold. The title track specifically, with its mix of haunting croon and shouted release, was a song that Dabice had initially written as a solo piece.

“I feel like we do a good job not calling quits to anything that feels weird initially,” says Paul. “Because there’s been a bunch of things that have taken months to come around and work out.”

Which brings us back to the musical identity of a band that, at face value can seem typically punk but that with a deeper look reveals such carefully crafted dichotomies of sounds and styles, intricacies of feeling and emotion, that belie any traditional genre definition. Even the album’s title, Romantic, betrays a double meaning, both true and seemingly ironic to any typical idea of romance, given the oft all-out aggression of the songs therein. The band, for its part, somewhat disagrees.

“I feel that’s what romance is though,” says Regisford. Adds Reading: “A lot of aggressive music can be romantic.”

“If you take a more honest look about the way we feel about things, maybe our definition of what’s romantic should expand as well,” adds Dabice. “There’s a really different way to look at feeling the heights of things. Romance is hopeful, but it also can be very painful to go through. You care so much about something, you go through all the stages with it. It doesn’t always mean that everything is fucking totally sunny.”

Mannequin Pussy’s Romantic is out now via Tiny Engines Records; the band celebrates the album release in Philly on Sunday, December 4th at Everybody Hits. Tickets and more information can be found here.