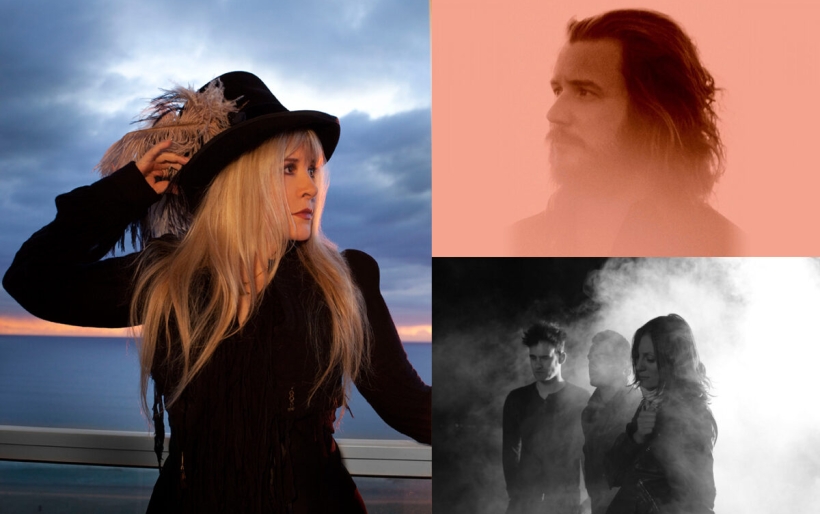 Point being if you, like us, are hooked on experiencing live music and discovering new artists, you should get out of your house do it now, while it’s practical, before winter finally sets in and you’re hunkered down at home wrapped in comforters and binge-watching Atlanta and Silicon Valleyfor days on end — which, honestly, is an enticing proposition in itself.

But we’re not there yet! October felt like a massive concert feast, and November is poised to be even moreso, with heavy-hitters Jim James of rock and roll army My Morning Jacket and Stevie Nicks of iconic pop ensemble Fleetwood Mac headlining major shows in Philly, as well as exciting gigs from up-and-coming artists like Toronto punk rockers PUP, Nashville singer-songwriter Margo Price, Minneapolis rapper Lizzo and more. It’s so jam packed, matter fact, that you could easily see a concert a day with options to spare. That sounds like a pretty fun experiment, actually. If we were going to do it, this is what it would look like.

Following the lead of Sturgill Simpson is one Karl Blau, a singer-songwriter from Anacortes, Washington, who dabbles in country with a Gram Parsons sense of trippy mysticism. His record Introducing Karl Blau came out in May on Bella Union and he plays World Cafe Live on November 2nd. [TIX / INFO]

Really, you’re not going to get many more chances to see an artist like Silver Apples in the flesh. Founded by Simeon Oliver Coxe III in late 60s NYC, the group pioneered experimental synthesizer and electronic music in step with European leaders like Kraftwerk, Faust and Neu. They play Underground Arts on November 3rd. [TIX / INFO]

It’s been a massive year for Philadelphia hip-hop crew Hardwork Movement, from the Good Problems LP and its packed house release party at Kung Fu Necktie, to a stunning Key Fest set, a Spruce Street Harbor Park throwdown, getting signed to Chill Moody’s niceTHINGS Music label. And they just keep building on it with a new EP and a headlining stint at Johnny Brenda’s on November 4th, their final gig of the year. [TIX / INFO]

On their latest LP, Toronto four-piece PUP declared that The Dream Is Over, and it isn’t entirely inaccurate. The record got a massive reception, including a New York Times writeup, and the band is packing houses at their biggest venues to date. This is no longer a dream, friends, this is reality. Bonus points on their November 5 gig at Union Transfer for awesome openers Cayetana, who have been on tour with PUP this fall; get there early.  [TIX / INFO]

Still got energy left after that PUP rager? Good. You’ll need it for New Brunswick, NJ heroes Screaming Females, who headline the basement of the First Unitarian Church on November 6th. Their latest LP, Rose Mountain, has been out on Don Giovanni for a year-ish, and frontwoman Marissa Paternoster is named time and again one of the best guitarists living. If you’ve never seen her shred live, I beseech you to hit up this show and find out why that distinction is. Again, there’s an excellent opener who hails from Philly: experimental visionary Moor Mother. [TIX / INFO]

San Francisco psych-rockers Black Rebel Motorcycle Club have been going strong for a decade and a half with their Spiritualized-meets-Jesus-And-Mary-Chain vibes. There hasn’t been any new music since 2013’s Specter at the Feast, so this headlining stint at The Fillmore on November 7th seems to indicate something new is in the works. Stay tuned, space out. [TIX / INFO]

They’re an American Band, like their new album reminds you, and they’re also gifted storytellers and songwriters. Athens five-piece Drive-By Truckers has been this way since the late 90s, and main man Patterson Hood brings the band through Philly on November 9th for a headlining shot at Union Transfer. [TIX / INFO]

On the newer side of that continuum is Margo Price, a spectacular singer-songwriter from Nashville who captured a lot of critical attention for Midwest Farmer’s Daughter, her 2016 debut on Jack White’s Third Man Records. She headlines at World Cafe Live on November 10th. [TIX / INFO]

Call this your week of roots, I guess, since the amazing Lydia Loveless is at MilkBoy on November 11. Her fourth LP, Real, came out in August on Bloodshoot Records, and it’s an engaging mix of twang, sass, longing and badassery. [TIX / INFO]

If you’ve somehow escaped an encounter with Philadelphia nine-piece New Sound Brass up to this point, we suggest you remedy that pronto. The army of trombones, trumpets, a sousaphone and marching drums put their spin on pop favorites and tear the roof off with rousing originals. They headline Johnny Brenda’s on November 12th. [TIX / INFO]

Durham singer and songwriter and storyteller M.C. Taylor is coming into his own as Hiss Golden Messenger, which just released its seventh LP, Heart Like a Levee. It’s the project’s second release for indie heavy-hitters Merge Records, and it’s absoutely breathtaking in a late-60s Dylan kind of way. Taylor will perform it live at Union Transfer on November 13th. [TIX / INFO]

Sheer Mag has been fixed in the sights of DIY scene trainspotters for the past few years here in Philly, and with good reason — they match the grandiosity of 70s arena rock with the raw aggression of basement punk. On November 14th they headline PhilaMOCA,and if you’re at all curious, we’d suggest acting now on those tickets — it will be sold out sooner than you realize. [TIX / INFO]

Man Man main man Ryan “Honus Honus” Kattner ruturns to Philly this month (albeit briefly) after his extended sojurn in L.A. led to the new Use Your Delusion solo debut, which sounds pretty spot on considering his oddball pop roots. He celebrates the new venture at Boot and Saddle on November 15th. [TIX / INFO]

This one made us do a double take, but it’s for real: space rock pioneer Nik Turner of Hawkwind fame brings the project to Philadelphia on Novmber 16th for a headlining gig at…Kung Fu Necktie? That’s a tiny space given this gentleman’s legacy, from prog to industrial to ambinet and beyond. Again, act fast on this before it sells out. [TIX / INFO]

You might remember her as the twangy lady who played a quiet outdoor set at NonCOMM 2012. Or you may remember her as the voice behind the ubiquitous heartbreak hit “Ex’s and Oh’s.” Whichever the case, New York’s Elle King headlines The Fillmore on November 17th, and it’s goning to be a throwdown. [TIX / INFO]

Okay, we’re officially in heavy-hitter territory. Jim James has a new solo record out this month called Eternally Even and, as our Chad Snyder said, it’s “equal parts funky and woke.” The My Morning Jacket frontman headlines The Fillmore on November 18th. [TIX / INFO]

With the future of Old City’s Tin Angel listening room uncertain, November 19th might be one of your final chances to catch XPN favorite Joseph Arthur in the intimate space. The Ohio singer-songwriter and visual artist has two decades of work under his belt, including this year’s charged outing The Family, his 14th LP since 1997. [TIX / INFO]

What can we say about Stevie Nicks? Haunting vocalist. Emotive songwriter. Classic rock / pop legend. Style goddess. Really, do you need convincing to see her Wells Fargo Center show on November 20th? Have you not heard “Edge of Seventeen” before? [TIX / INFO]

Breaking the rules a little bit here, but the concert calendar for November 21st is a little bit quiet, so instead I shall direct you to Balance and Composure‘s headlining gig on November 18th at Union Transfer. The Doylestown alt-rock five-piece took a lot of risks with the more atmospheric directon of their new Light We Made LP, out last month on Vagrant Records, and they paid off — the album is bold, immersive, and massive. With St. Louis post-rock outfit Foxing joining the party along with Philly indie-pop crew Mercury Girls, this is a show that just cannot be contained. [TIX / INFO]

And now for something completely ridiculous: the Cramps-y west coast garage rocker Nobunny, aka Justin Champlin, a dude in a demented rabbit mask. Catch the surreality in person at Johnny Brenda’s on November 22nd. [TIX / INFO]

The Thanksgiving eve homecoming show is becoming something of a tradition for pop-punk scene vets The Wonder Years, and this year, Dan “Soupy” Campbell and co. touch down at The Fillmore on November 23rd, still riding high on their fifth LP, No Closer to Heaven. [TIX / INFO]

Think nothing is going on musically on Thanksgiving? Think again: Manayunk’s Dawson Street Pub is hosting its 10th annual anything-goes music jam on November 24th, and we’re not quite sure what that means…but we’d be surprised if Ben Arnold is not involved. Dawson Street vibes below. [INFO]

Chinatown’s famed Trocadero Theatre will light up on November 25th with Peter Hook and the Light doing the Substance tour — a hit parade show from the iconic bassist for Joy Division and New Order. One for the nostalgia set, as well as those who never got to see Hooky’s projects on the first run. [TIX / INFO]

To kick off the season of giving, local blues jammers Flightschool will headline World Cafe Live on November 26th for the annual Box Social, a benefit for the Children Scholarship Fund Philadelphia, a local education nonprofit. [TIX / INFO]

Philly soul staple Bilal has been popping up all kinds of interesting places lately, from his great 2015 record In Another Life to his appearances on the new Common record, Black America Again. He headlines World Cafe Live on November 27th. [TIX / INFO]

When he’s not ripping on bass in Phish, the versatile Mike Gordon is making music of his own, like the dubified funk of his fourth LP Overstep. He’ll be at Union Transfer on November 28th. [TIX / INFO]

Midwestern hip-hop queen Lizzo dropped the knockout Big Grrrl Small World LP in late 2015, and it’s essential listening – a funky / poppy / infectious declaration of self-love and call for unity and equality, as human beings and on the dancefloor alike. She returns to Philly on November 29th for a gig at The Foundry and it’s sure to be lit with a capital L. [TIX / INFO]

Fronted by dynamic vocalist Carmen Elle, Canadian discotronic trio Diana closes out the month on November 30th at Boot and Saddle, and make no mistake – they will make you move. [TIX / INFO]

Of course, this is just the tip of the iceberg — there are plenty more concerts throughout the month of November that are worthy of your attendance, and we suggest you consult the XPN Concert Calendar to explore. See you at the show!