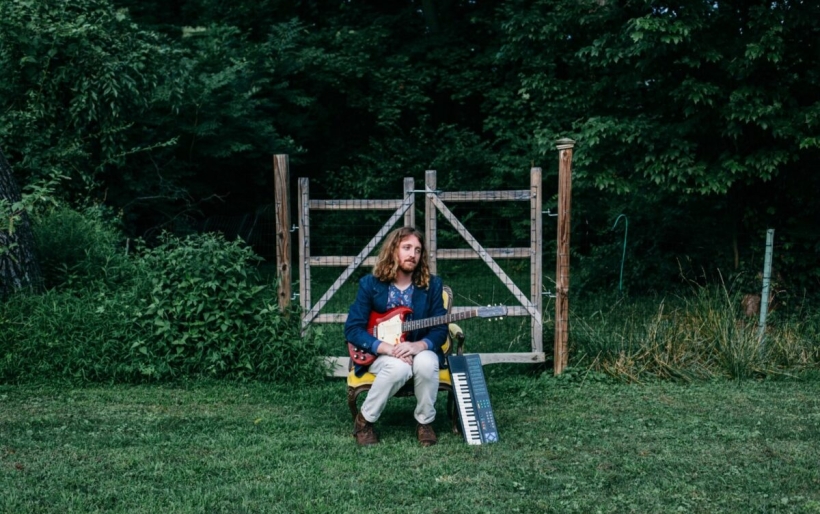 Dominic | photo by C.J. Harvey | courtesy of the artist

Philly’s Dominic Angelella has been in more bands than anybody else I know. Going back a decade to his time in Dice Raw’s Nouveau Riche, his versatile chops have carried through Zoe Kravitz’ first band Elevator Fight, his own long running DRGN King project and Lithuania, his punk duo with Eric Slick of Dr. Dog. Not to mention his stint playing guitar in Philly favorites Hop Along.

This winter, Angelella is releasing music under his own name for the first time, first name only; Dominic‘s Goodnight Doggies drops on Lame-O Records on February 3rd. You can pre-order a vinyl copy here, and get a digital pre-order here. It was recorded with Brendan Mulvihill of Norwegian Arms, who plays in his current live band along with Andy Molholt of Laser Background.

The record has an eclectic and super lively vibe, very much reminiscent of another prolifc and fun artist, Harry Nillson. The first single, “Birthday Song,” is out today, and we’re excited to bring you a first listen to it below.

To help celebrate the launch of Dominic’s first record, and to really get to know him as an individual, we had one of his best friends interview him: his former bandmate and current roommate, Hop Along frontwoman Frances Quinlan. They stoped by WXPN Studios yesterday before making a Wegman’s run and talked for over an hour about their friendship and mutual musicianship. It’s an incredible conversation and pretty much has me convinced that should the two ever decide to start a podcast, they’d have a robust subscriber base.

Some of the topics of the full interview: Dom and Frances’ Baltimore roots, and the first show they met at — a gig with folk-punk singer Counterfeit Matt at Baltimore’s Hobo House. Qunlan’s long lost Purevolume EP Sympathetic Flypaper and Angelella’s acting career that didn’t happen (he has an IMDB page for a second of screen time in Tuck Everlasting). They share stories about their first tour together, like playing a shopping mall in Canada with a youth center inside (“I think that may have been one of the best shows I played in my whole life,” says Dominic.) They reflect on their creative processes, and parallels between Baltimore and Philly.

Listen to the interview in its entirety below, and check out an excerpt below. Dominic is heading out on tour this fall with Photo Jenny and Vexxed — dates for that run can be found below as well.

Frances Quinlan: Let me ask, how come you didn’t go by Dominic Angelella from the beginning?

Dominic Angelella: Well, I’m going by Dominic now. That’s what this band’s called, and it’s not me, it’s a band. [laughs] So there’s that element of bands like The Mountain Goats, or like The Blow. You’re a songwriter, but you have a name that’s seperate from your name. And I think it almost takes away from the self-indulgent nature of, sometimes, singer-songwriters can get to that point. And maybe that’s a 90s thing, that I think some of those songwriters tried to esxcape by not using their name.

I picked the name Dragonzord when we were about to tour. First it was called Satan’s Fingers, like “The Best Ever Death Metal Band In Denton” song. And then it was called something else, and then I just stuck with that because I thought it was so funny to name a solo acoustic project after a power rangers zord. And that just stuck for a really long time.

DA: Until 2010. And you remember how long it took me and Brent to name Drgn King, it had six names. And then we were finally like allright, let’s take this band name I already had and make it less obvious that it’s about this super nerdy thing. And that’s basically how that band was named.

FQ: But I’m totally playing devil’s advocate because I never went by my own name.

DA: You do now sometimes, though.

FQ: You gotta obtain those experiences to really have the confidence to sit with your name.

DA: My friend Rick Frederick who was in Elevator Fight for a while, he was always like “Why don’t you just put out songs under your own name? What are you afraid of? I never really thought about how that could be a little vulnerable.

FQ: It is, it absolutely is.

FQ: But there’s also the illustion that there are other people who are doing it. And that’s the thing, people thought in my case that Hop Along was a band. And later on, people still think Hop Along, Queen Ansleis was a band, and it wasn’t.

DA: It was more of an idea, a point of view. And that’s pretty much why, and when I made this record, I wasn’t sure what I was going to do with it, but it made sense to put it out under my name,

FQ: You’ve got a good sounding name too.

DA: Thank you! You can thank my parents for that.