A Decade of Johnny Brenda's: Reflections and portraits - WXPN | Vinyl At Heart 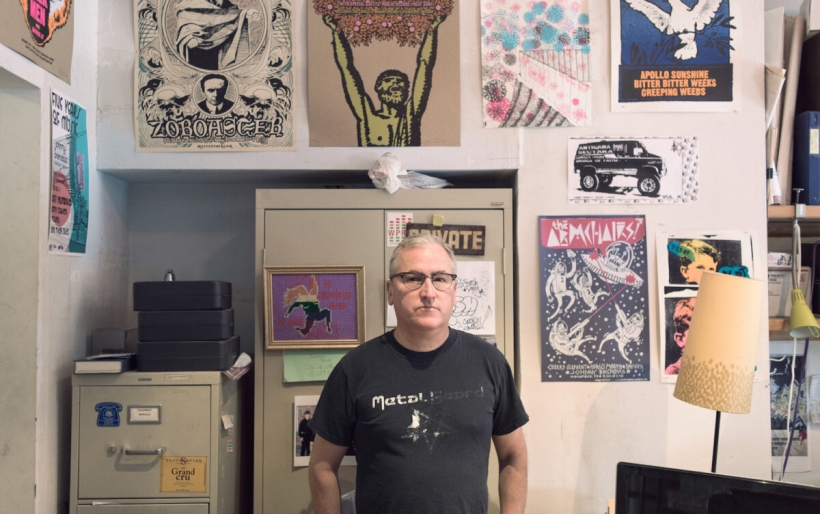 A Decade of Johnny Brenda’s: Reflections and portraits

Ten years ago this fall, Johnny Brenda’s opened the door to their new upstairs show space, and it celebrated the anniversary back in September with a couple nights of all-local shows. During that run, several of the staff and performers were kind enough to sit down for portraits and offer their thoughts on what Johnny Brenda’s means to them and the community.

Venue Manager, on the venue staff since day one, and member of beloved Philly punks Scram!

We’re not part of a feeder, a larger network of venues. I think that provides us a luxury of just kinda doing our thing. The owners, William and Paul, have always been…they’re in the trenches with us in terms of getting things done, they’re just in it with us. But they’ve also let us do our thing.

Quite often bands will outgrow us, but they’ll come back because they had a good experience. The first face you see walking into a show is likely George Kelley at the door. George has worked the venue since it opened.

I think that the fact so many of us have a history of playing ourselves makes a huge difference. We’ve all been in bands, some of us are still in bands. I’m sure there’s been nights up there where everybody from the showrunner down to the bar back had been or was in a band. I think that makes a difference, everybody gets it. We understand what they’re going through. Occasionally we understand what they may be trying to get away with. Another face seen since day one, most likely to be seen working the door or on either side of the DJ booth.

Johnny Brenda’s is still my favorite bar. Despite all the changes, and what’s going on the neighborhood, it’s still the bar I feel the most comfortable with. The bar that feels like home.

It’s kind of annoying because I find myself, “Well, I don’t really want to go to JB’s tonight but I want to go hear this person and I’m working the next two nights but here I am again.” Talent buyer who books the shows and receives between 3,000 and 4,000 emails monthly. Formerly of math pop standouts Pattern Is Movement.

The first time they ever asked me to mix a band here, one of the engineers got their dates wrong and I had to come in last minute. I had to come in seven o’clock to get a band on stage, generally it’s five o’clock. I got here, I got the band on and Shai, who no longer works here, (Shai Halperin of the Capital Years), he was running shows here. He came over to me, “Hey, you get a shift meal, what can I get you for dinner?” while I was getting the band on. I was like, “What? You’re feeding me?” He wrote out a menu because at that time there were no printed menus. He’s taking care of me, while he’s taking care of the show. I was like “oh shit” this is what I think a venue should feel like. If I’m feeling like this as an employee, how do these bands feel? This must feel amazing. DIY scene mainstay Barrett Lindgren is an assistant talent buyer who books the local support and has been working at JB’s for three years.

Every show, we put a lot of care into who put on local support. That’s something we take pretty seriously as a venue. We try to build bands that way, build their audiences by putting them on solid shows here, so if there’s a band we really like that can draw 30-40 people, we try to get them on a couple good shows opening up and see if they can build their audience within the room over the course of a year or two to the point they can do their record release headline show and sell the place out. Former production coordinator, who was hired after writing an open letter to the music scene in Philly.

I remember walking in and feeling like I had just never been in a venue like Johnny Brenda’s before. I started coming to shows here while also doing basement shows in South Philly, and this was the nice place to come see a show when I was 23 and drinking 40s.

I started thinking about two years in Philly, the music in Philadelphia, how different it was than in New York. So I sat down one night, after a couple glasses of wine, and I wrote a letter, it’s a letter to Philadelphia basically, about music. I ended up giving it to Chris Ward as my resume. He read it and he called me and said “you should come work here, see if you like it” and Greg [Mungan] ended up hiring me. Sound engineer; member and part namesake of The Cobbs.

It’s catered towards musicians. A lot of the people who work here were musicians so it’s nice to have musicians come here and feel happy about it. I’d see bands show up at some of the venues in Philly, I’d see the interaction…the people working at the venue would act like they had no idea why that band was there. The band would come in, dragging their equipment, they’d go to the bar because there was no one else to talk to and the bar would be like “What, who are you?” You’ve invited these people to come play, these guys are on a tour, stuffed in some van, sweaty, tired, hungover probably, and they show up at some venue and the venue acts like they don’t know who they are. And it’s like, “Is that band going to play a good show?” We really wanted to have something that was part of a neighborhood but also have a regional, cultural program. Member of the restaurant staff, plays in a band called Hop Along.

Johnny Brenda’s is its own little community that I feel very much a part of and welcomed in. They’ve let me go on tour and come back with a job and a sense of security, a place that I can go to. A lot of restaurant atmospheres can be really competitive and unhealthy and I really appreciate that that is not the case at Johnny Brenda’s.

It’s the only non-all ages space that I definitely don’t feel bummed out about playing. Ben Leaphart: It’s like being at home. The vibe here is if you take a great small venue where you feel you’re on the floor with the crowd and put it in a great bar. Founded as an output for the musical machinations of local person Matt Scottoline, backed by local cousins Rob DeCarolis on drums and Joe DeCarolis on bass.

Matt Scottoline: There was an allure to Johnny Brenda’s too, it was the cool place to play. To have the first Hurry show be an R5 show at Johnny Brenda’s felt like a very big deal to me at the time. Johnny Brenda’s always seemed like they cared about the bands playing more than a lot of other places did. They took it seriously.

Rob DeCarolis: The staff was always super-nice. Little things like you get drink tickets and it’s for anything on the draft menu, whereas you go somewhere else and it’s like “Oh we bought you a case of Schlitz.” They want you to be there and it’s not like they’re doing you a favor.

Joe DeCarolis: The first show I saw here was Menomena, on the Friend and Foe tour. I had never been here and was like “I hope it sounds good in there,” because there are all these sonic intricacies on that record and it would stink if they’re not audible and clear live. And they were! They ended with a song with all these harmonies and the opening band came up and did the harmonies with them and it sounded amazing. It was such a cool way to hear those songs.