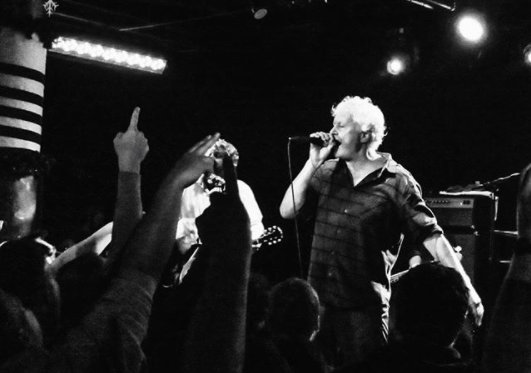 Guided by Voices | photo by Scott Troyan | courtesy of the artist

Last night, surrounded by a throng of sweaty bearded men and at least one persistent fart, I hung out with our Uncle Bob. We were there to see him, and like any great uncle, he entertained us until we were exhausted and then left us to our own devices.

Seeing Bob Pollard and his newest Guided By Voices lineup at Underground Arts on December 30th makes New Year’s Eve seem a little redundant. I mean, what kind of toast can compete with the one our pumping fists offered to “Exit Flagger”?

Bob even gave us his New Year’s resolution. In 2017, he promised us 100 new songs and six new albums. “At least two of them good,” he said. We all laughed at that one. We didn’t laugh because there might be four bad Guided By Voices albums or Robert Pollard solo records. We laughed because if there’s one thing we’ve learned from Uncle Bob, it’s to stop being so precious with everything. Write a song. Finish the song. Move on. The crowd was certainly old enough to remember that 24 exposures on a roll of film might yield two good photos. Maybe one great one. In the 365 days of a rough year like 2016, this was a good rule to remember. In 2017, it might become mantra.

Luckily GBV has thousands of songs to choose from, so the night provided a tremendous slide show. We yelled along to “Motor Away” and “Cut-out Witch” and “My Valuable Bull Hunting Knife.” After “Bulldog Skin,” Uncle Bob reminded us that sometimes you need bulldog skin to get through the year. Is bulldog skin tough, I wondered. Or was he referring to its flexibility? Bob would not have appreciated my thinking about it too much, so I moved on and ordered another beer.

After “Teenage FBI (Someone Tell Me Why),” he told us how TVT, the record label at the time, insisted on the parenthetical. “Because that’s the line you keep singing,” they told him.

“This is why I have my own label now,” Bob said.

Like many shows, there were many bearded and bespectacled men, but judging by the age range, most of the beards, like mine, were merely there to make our faces look less bloated, and the glasses were our last before bifocals. My friend Scott and I figured we were plus or minus 10 years the average age of GBV’s fans that night, so we felt pretty relevant. (Before we left for the show, there were some texts about maybe staying “nesty” at our homes, it being a cold December night and a 45 minute drive, but we thankfully rallied.) One younger fan sported a Nigel Tufnel haircut and a Cheap Trick t-shirt with the sleeves cut-off. He knew a lot of the words to the newer songs and often turned away from the stage to sing them to the rest of us.

When enough people left on their first bathroom break, I found myself close enough to the front where I could make my way to the front of the stage where all the swirling action was. Bob rewarded the rabid stage-side fans with pulls from the band whiskey bottle.

“They pushed their way through matter and spirit,” he said of the front row fans.

By the time Bob and the boys played “Glad Girls,” I was in the middle of it, pushing and being pushed. Was this a mosh pit? Was it 2016? We shouted along with the chorus to “Goldheart Mountaintop Queen Directory,” as some woman kept playing all the drum fills on my back. I think I made the hand-horns signs once or twice, without a hint of irony.

Irony has no place at a GBV show, anyway. Every one of 59-year old Uncle Bob’s leg kicks meant exactly what it purported to: look what I can still do, what we should all be doing every day, for as long as we can.

I got home at 2 and slept until 11:15. Apparently, I bought a t-shirt. (What year is it again?) I left before the third encore so I didn’t hear them play “A Salty Salute” or cover “Baba O’Reilly,” but as far as I know the show is still going on right now, and that’s a hopeful thought as I move into this new year.