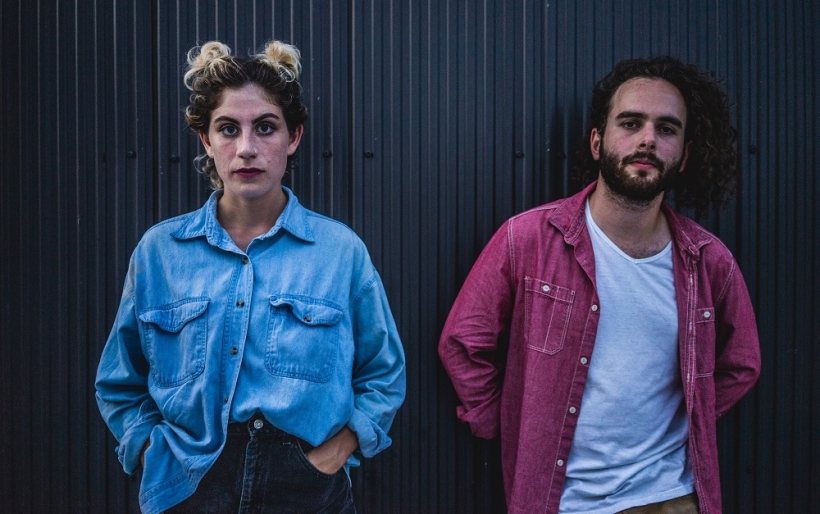 Local singer-songwriter Liz De Lise is settling back into her Philadelphia life after spending two months on the road supporting the self-titled debut LP she released this past fall, but she’s not slowing down just yet. She and her bass player Mark Watter will hit the Boot & Saddle stage this Friday, January 13th for their first hometown show of 2017, and today we have the premiere of a brand new video for album standout “Baby Bird.”

Directed by Liz Charky and featuring Skyler Volpe, the clip brings to life the feelings of vulnerability and fragility that De Lise explores in the song. It’s beautiful and heartbreaking all at once, and though the song was written quite some time ago it gained a new level of meaning for De Lise after an experience of harassment that occurred while she was promoting the album. In the essay that follows “Baby Bird” below, De Lise shares her story while contemplating the various ways we tend to react and attempt to protect ourselves in these situations, and how to balance the importance of feeling safe with a refusal to give up your sense of self.

Before I released my full-length album in September, I contacted some people who had reviewed my EP a few years back. I received a Facebook message on the “Lizdelise” band page from a man who worked for a magazine based on the west coast. We’ll call him Stew. The magazine had since shut down, but he could get me X number of reviews for a “great deal.” I thanked him for the information, but politely declined. He continued the conversation, saying that he remembered loving the EP and that maybe he could review the new album free of charge: 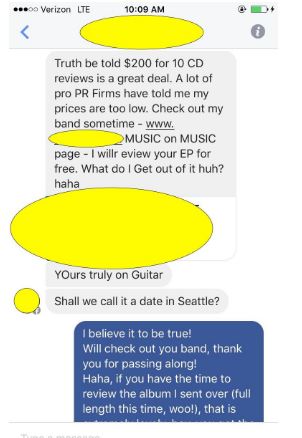 This, and his decision to use the word “date” made me uneasy. But, I was being overly sensitive, right? I decided to continue the conversation in an oblivious way, a tactic I’d used in similar interactions with men who were trying to “make a move.” Usually, it successfully assuages the creepiness, and, confrontation not being my strong suit, keeps me from having to call anyone out.

I had told Stew that my bandmate, Mark, and I would be touring to the west coast, and he said he’d like to meet up while I was in town.

I showed the conversation to Mark and agreed that it would be best to stop replying. Unperturbed by my silence, Stew sent this: 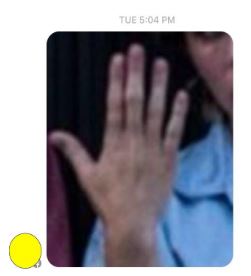 Stew had cropped an image of Mark and I, leaving only my ring-less left hand, as if to say, “You’re single, I’m single: what’s the problem? Wouldn’t you do anything for your music?”

I started to take screen shots of the conversation, unsure of what else to do. He continued. He’d listened to and “loved the album,” he’d have a review “live by Friday.” This was followed by a phone call — he must have had my number from our previous interactions —, which I let go to voicemail.

I wish I were the kind of badass feminist that tells people like Stew how unsafe and disgusted their words and actions make me feel. I wish I could have told him that he is perpetuating the cycle of women believing they need to cross the lines of professionalism and use their bodies to achieve their goals, because the world must still be run by white, straight men whose interest in you is dependent on whether you make yourself sexually available to them. I want to be someone who is unafraid to be strong in the face of misogyny and ignorance. I want to be someone who demands equal treatment in my profession. Instead, I gave him one more chance and asked that we continue the conversation via email. 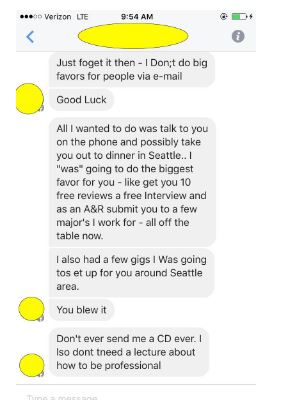 I’ve since blocked him from our band page and blocked his phone number. I wanted to share this experience namely to start a dialogue with other musicians who’ve been harassed, especially those musicians who identify as women. (I speak from my experience as a hetero, cis-gender woman). But I’m also just tired of brushing things like this to the side.

In my experience, most women in the music business are warned about people like Stew early on, though many women are also taught to be polite and agreeable. It’s impossible to parse out which parts of our personalities are due to societal and cultural influences, but I feel sure that being confrontational and outspoken are only just starting to be “okay” and “normal” qualities for women to possess. It still feels like a woman is an outlier if she is outspoken, that she’s “bossy” or a “bitch.”

It’s been over two months since my Facebook conversation with Stew. I was, and still am, afraid that this guy would write something horrible about me while I’m in the infant stages of my music career. I was more afraid that he would show up to our Seattle show. He didn’t, and I haven’t heard anything from him since. I work really hard to be an open and honest performer and writer, but this has made me harder on the outside. I’m learning to protect myself from the emotional detritus people throw around when they feel you and they have an immediate emotional connection because you’ve just performed an emotionally honest set. I cherish many of the interactions I’ve had with people after shows, but when it’s a hetero man who is speaking to me for an extended period of time, I question his intentions and feel trapped. I wish that he would take a second to observe himself in the situation. Does she want to speak to me right now? Does my body language make her feel unsafe?

I’ve been wearing a hat, trying to hide my face more. I hate that his words evoke a fear in me that makes me forget who I am and makes me want to hide my body and face. I know this is a tame example of the detestable behavior women experience professionally, particularly in the music business, but I don’t want to diminish my experience either. So many women, so many people, do that too often. If you feel afraid or violated, you have the right to talk about it and seek solidarity. Your feelings are valid.

In episode 603 of This American Life, “Once More, With Feeling,” Eleanor Gordon-Smith, professor of ethics at the University of Sydney, asks men why they “catcall.” She explains to one man that while you might have no violent or salacious intentions when you catcall, and just want to make a woman “feel a little bit special,”

2/3 of women think that [the situation] is going to get worse…One of the strategies we adopt is laugh, smile, be collegiate, be appeasing, be non-confrontational. Right? So I want to suggest to you that it’s possible that a lot of the smiles and laughs that you see on the faces of the women who you slap or compliment are ways for them to get out of the situation rather than ways of thanking you.

Men have learned that when they want something, they can and they should just take it. They forget their position of privilege in this world, and so they forget that their actions might be perceived as threatening. I’m tired of smiling in the face of entitled men like Stew. I’m tired of diminishing my disturbing interactions with men. It’s going to keep happening, yes. And yes, it could have been so much worse. But I needed to say something. I needed to start somewhere.

My dear, dear friend and collaborator, Liz Charky, created the concept for and shot the video for “Baby Bird.” The video features another dear friend, Skyler Volpe. Charky is a brilliant choreographer and filmmaker. Skyler is a stunning actor and musician (and is currently touring as Mimi in “Rent”- nbd). Both are gifted dancers. I am inspired by these women and am honored to have collaborated with them since we met at Connecticut College 6+ years ago. I’ve learned from them what it means to be a strong woman, a woman who is unafraid to question the status quo and to do so in your art.

I wrote “Baby Bird” well before my experience with Stew, but what happened with him only affirms what I felt then. Each of us is fragile and vulnerable, because we’re living things. But we’re not victims. There is strength in vulnerability because it leaves you susceptible to all kinds of experiences, many of which will be painful. There is strength in finding ways to share these painful experiences. You don’t always need to be okay. If we allow ourselves to speak about and grapple with such things, we make a space for others to do so as well. Through processing and understanding and listening, we find joy.