Farewell to a Listening Room: Reflections on the closing of Old City's Tin Angel - WXPN 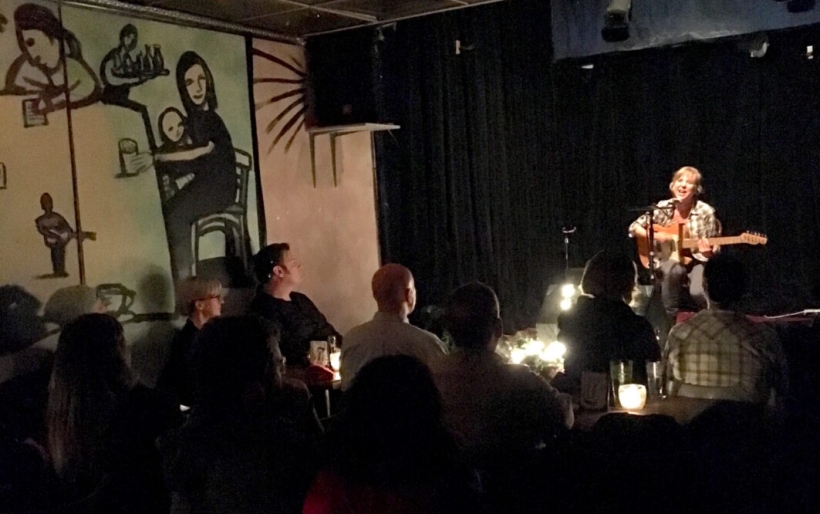 Farewell to a Listening Room: Reflections on the closing of Old City’s Tin Angel

Back in early December, I saw something at Old City’s famed Tin Angel that I hadn’t seen in forever: a line. A queue of people running down the staircase, out the door, stretching up 2nd Street, waiting in earnest for a performance by alternative-era singer-songwriter Kristin Hersh.

Certainly the 150-capacity room drew packed crowds countless times over the years, but something felt different this night. It was a sold-out show heading into a long string of sold-out show as the venue calendar wound down, this weekend presenting its final concert after more than two decades in business. Tonight, The Hillbenders take the stage in a show curated by the Philadelphia Folksong Society, and it’s the last gig you’ll be able to buy tickets for at the door; tomorrow’s show with Steve Forbert and Saturday’s double-header with Ben Vaughn have long been sold out. And after that, the Tin Angel belongs to the ages.

Waiting in line back in December, though, crammed in a staircase lined with 8×10 glossies from days gone by, the crowd was able to reminisce about gigs they’ve caught at the Tin over the years. Jill Sobule, saw her; Chris Smither, saw him; Amos Lee, wow, can’t believe I saw him here; Odetta, dang, can’t believe I missed her here. Wait, Everything But the Girl played here, are you kidding me? But of course they did — they used to be a jazz-folk duo before their DJ night days.

From the stage, Hersh shared her own memory: “I guess this is the last time I’ll be playing at the Tin Angel,” she said. “It’s also the last time I’ll see my kid’s drawings on the dressing room wall. I mean, I’m not saying they’re the best drawings ever. But it’s sad to think they’re going to get painted over.”

The Tin Angel is closing…saying goodbye to the drawings my kids have done on the dressing room wall over the years pic.twitter.com/FeGd6CLCLk

The venue is going out after 24 years and, per the Philadelphia Inquirer‘s Dan DeLuca, some 4,850 shows.

“Music venues come, music venues go,” wrote DeLuca. “Rarely do they stick around for as long as the Tin Angel while playing an important role in sustaining a vibrant big-city music scene.”

Nestled on the second floor above Old City eatery Serrano, the space was pretty much a storage room from 1985 until about 1992, when original owner Rich Macklin decided to open it up for music. Enter Larry Goldfarb, an industry vet who had quite a career locally booking gigs ranging from Keith Jarrett and Tom Waits at the Academy of Music to The Hooters’ expansive 1981 residency at Grendel’s Lair on South Street.

“I came upstairs, and it’s all full of junk, it’s a little narrow room,” remembers Goldfarb when I caught up with him via phone. “And immediately in my brain, I said ‘this has to be a songwriter room.’ Because we were not going to be able to bring in five, six piece rock bands. It was not suitable to that. It has to be a listening room.”

That’s a phrase that comes up often when talking about the Tin Angel: “listening room.” In an industry where performers who lean toward the quieter end of the VU Meter often have to fight the din of bartenders dumping buckets of ice into coolers and chit-chattering pockets of the crowd commiserating about who know whats — or, from the the audience’s perspective, sightlines had to be negotiated amid servers darting back and forth with dinner plates and silverware — this was the rare room where people shut the hell up, kept their eyes on the stage and let music be the focus.

“There were no good quiet rooms in Philly in the early nineties, which was a shame because the city once had a great reputation for presenting acoustic folk and blues music,” remembers Vaughn, who played opening day on November 13, 1992 and who brings the venue to a close on Saturday. “You had the Main Point, Grendal’s Lair, the Cherry Tree, the Second Fret, etc..  But in the nineties?  Nothing.  The idea for the Tin Angel was long overdue.”

“The Tin Angel was one of the first big breaks you got,” says singer-songwriter Dar Williams, who played her final sold-out show at the Tin back in January. “The audiences supported musicians and their careers, even at the beginning, and this was the perfect listening room for making introductions.”

One of the best documents of the listening room concept is the little-heard record by Philadelphia’s Cassendre Xavier, Live at the Tin Angel. You might not know her by name, though it’s quite possible you’ve encountered her busking at local spots like Suburban Station. In 2006, she recorded a live set at the Tin, and it merges her heart-warming acoustic songs with inviting, light-hearted, often comical banter. This album comes up on shuffle on my iTunes surprisingly often, and even when Xavier’s stories are taken completely out of the context of the song they’re introducing or the show they were a part of, they command your attention.

This is the kind of vibe the Tin Angel cultivated — one of intimacy and friendliness, one where singers didn’t worry so much about opening up to the audience because the audience was there to support them. Shows were like a family gathering, making the Tin Angel the living room of the Philly singer-songwriter scene.

“The best part of playing at the Tin Angel is the approximety of the audience,” says Vaughn. “They’re right there with you.  In that setting, any subtle nuance can become a special moment.  A moment that may only happen once.  But your mistakes will be obvious too, so you have to watch out!”

Between John Overmyer’s iconic murals filling the walls, and a sound system designed by original engineer George Pierson, and a long throw that nestled audiences in tightly from front to back, the setting was ideal for just about any scale show.

Something else that a music town needs — or needs more of, anyway — familiar faces in an industry where people come and go every few months. As Goldfarb points out, Tin Angel has had two sound people in 24 years; Pierson and current engineer Barb Adams. It’s had two owners, three managers. “I think that’s a reflection of how people feel about the room,” says Goldfarb.

“It’s a remarkable level of consistency, which was part of the pleasure of playing there,” says Stace. “To my knowledge, I only ever had one of two people paying me at the end of the night.”

John Overmyer’s iconic wall murals and logo at the Tin Angel | via facebook.com/TinAngelPhilly

For touring artists, rooms like the Tin Angel aren’t common. Stace says “It’s a fairly unique venue,” explaining that with a handful of exceptions, rooms of its size tend to be either bars or coffeeshops, places where music is de-emphasized.

“Very few of them are very compact listening rooms with a fairly excellent restaurant downstairs,” Stace says. “Which I do look forward to food when coming to a town, don’t underestimate the importance of good food when you’re on the road.”

It’s also a home for what Goldfarb terms the lifers of the music industry. He tells a story about one of his favorite bookings from over the years — LaVern Baker, a 50s rhythm and blues singer whose hits included “Jim Dandy” and “I Cried a Tear.” She played the venue in the mid 90s, not long after both legs were amputated due to complications from diabetes. Goldbarb remembers he and Pierson helped carry her up the venue’s two flights of stairs, and he stuck around to check out her first set.

“LaVern Baker sang her ass off,” Goldfarb remembers. “I was so blown away, I stayed for the second show, then stayed later and talked to her for a half hour afterward. This is what she was made to do: sing. Some people are lifers, they’re gonna have their ups downs, maybe not make a lot of money — but that’s okay, because they’ll tell you ‘music is what I was made to do.”

Goldfarb said his goal was going out with a bang, and that the Tin Angel is certainly doing. A packed house with Marah. Five sold-out shows with Citizen Cope. Local folk favorites Grey Eye Glances playing their first gig in seven years — also sold out. An all local bill led by John Francis and Lily Mae to benefit SoundGirls, a nonprofit that Adams works closely with that aims to bring more women into audio engineering.

After this weekend, the venue moves out and the new tenants move in — it will become a Peruvian restaurant, tentatively titled Balconcito Old City.

Vaughn says it feels great to be the first and last act to play the Tin.

“I can still remember that first night like it happened yesterday,” he recalls. “The place smelled like fresh paint and they were still putting the finishing touches on the P.A. system.  But we had a magic show.  It was obvious that the Tin Angel was a winner. I have to admit, I’m tempted to encourage the late show audience to destroy the place after our set [on Saturday].  What are they going to do?  Not book us there again?”

Owner Donal McCoy plans to keep the Tin Angel brand alive elsewhere, and is in the process of looking for a new room — a slightly bigger room, Goldfarb says, though he’s told his partner to never lose sight of the atmosphere.

“People come to hear music,” Goldfarb says. “It’s almost like these beautiful murals on the walls speak music. I know that sounds a little crazed, a little off. But I’ve impressed on him, even if we want a bigger room, we gotta keep the same vibe. You have to keep the intimacy.”

The Hillbenders perform tonight at the Tin Angel; tickets and more information on the show can be found at the XPN Concert Calendar. The final performances happen this Saturday night, February 4th, with Ben Vaughn.