Now Hear This: New songs from Gabriel Garzón-Montano and more 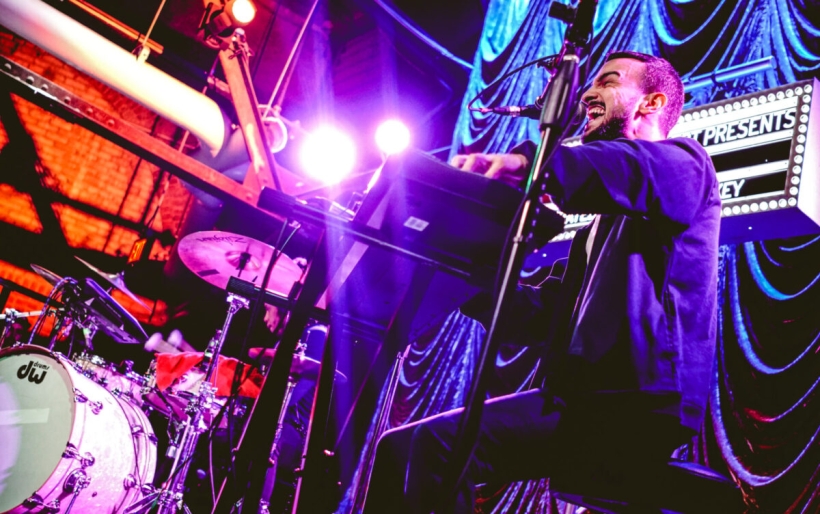 Every month, noted song expert K. Ross Hoffman presents a sampling of fresh specimens for your consideration. Here are his picks for February, 2017.

Happy new(-ish) year!  January tends to be a slow time for new music, as release schedules (and concert calendars) gradually shift back into gear following a generally-observed hibernation around the holidays.  That felt especially true this year, with no major releases dominating the musical conversation the way, for instance, Bowie did in 2016.  (I guess we also had a few other things to pay attention to.)  But there were still a handful of gems to sift through, all well as some promising signs for what’s to come later in the Spring.  The selections below includes a pair of pre-release teasers from disgruntled old geezers, sterling examples of several different strains of soul music, a smattering of political content – sorry, you can’t escape it here either – and the first great pop banger of 2017.

Let’s kick it off with some grooves. Twelve months after Anderson .Paak brightened up January 2016 with a phenomenal full-length that launched a major breakout year for him, this similarly prodigious Brooklyn-born, French-Colombian neo-R&B auteur dropped a debut LP, Jardin, that signals some great things to come. Outrageously multi-talented in the tradition of Stevie, Sly, Prince, D’Angelo and Miguel, he’s a singer, songwriter and multi-instrumentalist who also handles his own production – which, in particular, shines on this gently psychedelic late-album standout, a slinky, shifty, subtle funk number that swells into a gloriously uplifting, layered vocal fantasia.

2. Flo Morrissey and Matthew E. White – “Look At What The Light Did Now”

Is disco? Is this disco? What is this exactly? “Disco Is,” as featured on Love Is Possible, the pretty great third solo LP by this Osaka popstar (formerly the frontman of psych-rockers YYT), just released in the States, is a characteristically loopy bit of woozy retro lounge exotica: rubbery peals of Hawaiian-style steel guitar, harmonized flutes, more cowbell. You can stream that “Disco Is” (ディスコって) on Spotify, but otherwise (despite being the lead single) it’s seemingly absent from the internet; in its place (for instance, in the song’s video, delightfully animated by Sakamoto himself) you’ll find a quite different (but equally bizarro) version, a slowed-down, vocoderized cover by Sly Stone freak Syunsuke Ono which transforms it into a hybrid between Fresh-era Sly and Point-era Cornelius. Pretty groovy any way you shake it. Hey man, disco is as disco does.

Vintage-styled soul bands are practically a dime a dozen these days – not a bad state of affairs, to be sure – but this SoCal sextet have gotta be worth at least a nickel. Without necessarily adding anything new to the equation, they execute the fundamentals of the genre beyond flawlessly, with nary a lick out of place. Better than that, they’re clearly aiming for spiritual as well as musical recapitulation, recognizing the socio-political contexts and subtexts that provided direct motivation for the original Southern soul explosion – and acknowledging that those forces are, sadly, far from extinguished. As Dale Spollett admonishes in his searing, testifying tenor, atop a doggedly determined horn section slow-burn: “Dry those tears/we’re still marching.”

Alright, let’s go there. The third album from these somewhat frosty electropoppers – released, portentously, on January 20th, under the highly suggestive title Future Politics – is easily their most immediate, incisive and (obviously) political work yet. Now, Austra are Canadian, the album was written well before the US election and all that has followed, and, despite this title cut’s blatantly anthemic, darkly-tinted synth churn – musically, the most direct and dance-focused they’ve ever been – any specific interpretation of the desperately hopeful titular phrase remains elusive. Still, it’s hard to escape the chilling resonance of Katie Stelmanis’ open-ended assessments (“realities beating/a grave has been dug”) and her emphatic assertion that “I’m never coming back here.” That trademark quaver in her voice has never felt more fitting.

If that all sounds a little overly abstract and you just want to go out dancing, well… I know a song. And if you’re tired of waiting for girl-pop saviors Haim and Sky Ferreira to finalize their long-in-the-works sophomore records (hopefully sometime this year), I know a band: MUNA, an LA-based trio whose debut LP is out today and features one of the most deeply powerful, euphoric and at the same time (particularly post-Pulse) utterly heartbreaking pop singles I’ve heard in a long time. It’s essentially a queer/feminist 21st-century revamp of Petula Clark crossed with the redemptive gospel promise of the Staple Singers. It’s also a full-throated, eyes-wide, galvanizing paean to self-love, community, resilience (“a bruise is only your body trying to keep you intact” – fucking hell), mutual trust and defiant, loving vulnerability in the face of disastrous upheaval – basically, exactly everything that we need right now. And dancing. Always dancing.

And if you’re looking for some entirely literal protest music, well, there’s no shortage of that floating around either. This memorable, expressly topical tune from folky Guy Blakeslee is, despite the steadfast dissentient feint of its title, entirely unambiguous. (I, for one, am totally on board with the Voldemort treatment.) Blakeslee’s been kicking around for quite a while (working sometimes under his own name, sometimes as The Entrance Band) but he should get a well-deserved bump when his Thrill Jockey debut drops later this month. This song’s original version, released a day before the inauguration (and benefiting Planned Parenthood) begins with unaccompanied voices before swelling to include glockenspiel, fuzz guitar and martial drumbeats, while the in-progress protest compilation Our First Hundred Days is offering an “A Cappella Mix” which suggests how it might sound if adopted for use at street rallies and such. We’ll have to work on our harmonies.

Entrance plays Philly on April 14th, at a venue TBA

This Buffalo-born, NYC-based, lived-all-over singer-songwriter filled the bulk of her wondrously warm, comforting new LP Not Even Happiness with her strikingly deft acoustic finger-picking. But for the album’s closer, and its most affecting song, she sets the guitar aside in favor of a soft, Enya-esque synthscape. The lyrics (which, curiously, don’t include or even gesture toward that striking, decisive title) are at once a rumination on the limits of a life lived adrift, a confessional of lessons learned (“I have broke down asking for forgiveness/when I was nowhere close to forgiving myself”) and a tender, tentative love song, directed inward to herself as much as out toward its unspecified “you.”

Julie Byrne plays PhilaMOCA on Saturday February 25th, leading off a triple-bill record release party for the more rockily-inclined songwriter-type Vagabon which also features the irrepressible dance-pop demigod Shamir – whose music sounds nothing at all like theirs, but whom you definitely want at your party. Should be a good time.

We don’t get to hear nearly enough from Jarvis Cocker, one of rock’s great acerbic wits. The Pulp frontman’s last album came out in 2009, so his just-announced team-up with pop-classical provocateur Chilly Gonzalez – a song cycle entitled Room 29, inspired by Hollywood’s Chateau Marmont and due out in March – is big news. This first single is delectably sparse: nothing but Gonzales’ icily solemn piano and Cocker’s restrained but surprisingly expressive vocal. (It supposedly features Ryuichi Sakamoto – who, incidentally, also has comeback plans for 2017 – though I’m unclear on how he fits in; perhaps it’s related to the instrumental reprise.) “Tearjerker” – the title is both form and subject – is addressed, pointedly, to a womanizing schmuck (I’m envisioning the bathrobed doofus from the also hotel-themed interior artwork of This Is Hardcore) in a tone that’s at first wryly withering (“you don’t need a girlfriend/you need a social worker”) but then recedes into a blank, clinical detachment rendering the situation all the more pitiful and poignant.

10. Robyn Hitchcock – “I Want To Tell You About What I Want”

This just in: another of rock’s great acerbic wits, the thankfully much more prolific Robyn Hitchcock, is coming back again with his self-titled 21st album. (That’s an average of one every three years his entire life!) This opening track is rockier than he’s been in some time, with a level of crunch and absurdism that almost recalls Guided By Voices (or, more aptly, The Soft Boys), full of instantly quotable lines (“I hear you thinking I’m a thug”) and peppered with “aa-oooh”s and “skiddly-bop”s. So what does he want, does he really really want? Well, for starters, “world peace and gentle socialism.” Also, “a non-invasive kind of telepathy.” Hey, forty years ago he just wanted to destroy you, so I’d consider this is a step up.