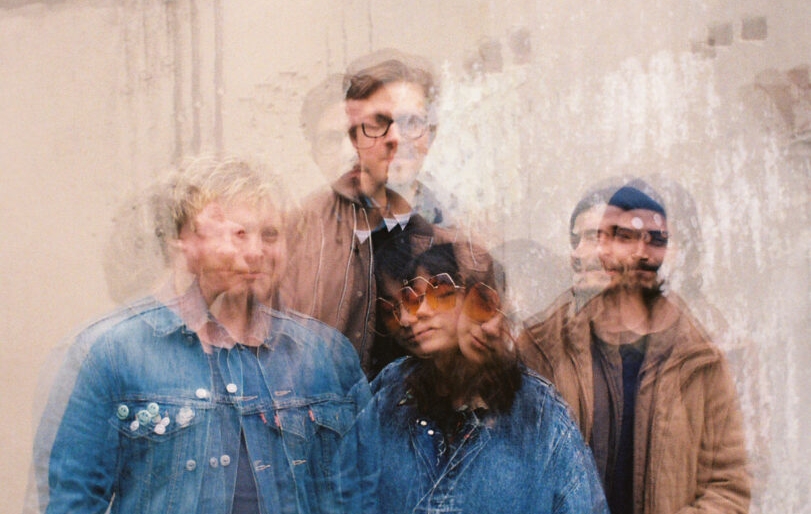 Listening to a Dementor: Spirit of the Beehive on channeling the emotional spectrum for Pleasure Suck

Pat Conaboy, drummer of Spirit of the Beehive, stands his bed, which is just a mattress, up against the wall of his bedroom so that the rest of the band can fit their amps, a synth and other gear for practices. The room is densely filled — stepping on cables strewn about the floor is unavoidable. Upon entering, each member of the band is laughing as if they’re old friends just hanging out, beers already in hand. But not long before that cymbals stopped ringing and the amps are now being turned off as practice is being wrapped up.

Maybe these four are long-time friends. It’s obvious they’re comfortable with each other in the way deep friendships let themselves be exposed through goofy jokes and snarky comments. Guitarist and singer Zack Schwartz is good for this throughout the night.

“It’s so disjointed and all over the place,” Schwartz says about their upcoming album, Pleasure Suck while leaning over his tall guitar amp. “Half of it was written while we were recording it. Not to say that it’s a bad record.”

With emphasis on the sarcasm of the later portion of that statement, Schwartz goes on to explain that much of the songs were written in pieces rather than as whole songs. That way of writing is apparent throughout the album, which is a seemingly dissociative trip through some concerning self-realization. The key word: trip. Most of Pleasure Suck hits hard without any hints. It makes changes without showing where it’s going. Even Schwartz felt some discomfort with how cut up it comes off at first.

“It was more like the idea of having what you wanted it to sound like and you can’t necessarily do it in one shot,” he says. “We would do a part, cut it and then put it together. It was only tough because you didn’t know how it would sound in the end or where it would go.”

Despite how it’s described, Pleasure Suck isn’t piecemeal. In fact, sequencing is important to Schwartz and he focused on the album as whole, rather than each song’s individual composition.

“The order of the record is super important to me,” Schwartz continues. “It’s about how they all sound going into each other or how it sounds as a whole. But there’s no specific goal in mind. I don’t have a bullshit explanation for what it means. It’s about how it sounds”

That sound is something seething from a dark trip. Spirit of the Beehive expand upon their alt-rock riffs and hooks found on their 2014 self-titled album for the sparse psych of “Pianos, Heavy Instrument,” leading into the layered and dragging delirium of “Snow on the Moon.” The noisy dissonance of “Time of Scratch Them All” keeps the band in check that they still plow through ear drums with grungy guitar distortion.

Arguably, “Big Brain” has the golden hook of the album. And Schwartz has a joke for how they band communicates what song is next, “after ‘the hit,’” in their set. He puts the room in stitches, getting exuberant belly laughs from guitar and synth player Phil Warner, Conaboy and bassist and singer Rivka Ravede. The joke was about how Warner would hypothetically wear sunglasses on stage to communicate the setlist to the rest of the band, and it was a hit, too.

Not long after that, Ravede grounds the room when the topic of band’s songs being generally dark is brought up. She agrees to the suggestion, but sheds some light one what Pleasure Suck makes her feel.

“When I first listened to it I felt like I was listening to a dementor,” Ravede says. “But then I listened to it a few more times and it’s actually not like that. It’s actually very nice. It’s weird because at first it sounds like it should be making you feel good. And then you’re like, ‘Why is this making me feel bad?’”

Pleasure Suck has plenty of studio production throughout. Which it was actually recorded in Big Mama’s studio, where Conaboy lives. But it doesn’t come off as over-produced. The band agrees their live set is quite different than what’s found on the album, which isn’t anything unusual, but it effects how they prepare for gigs.

“We usually have to rework all the songs because there’s a lot of stuff that’s done in the studio,” Ravede says. “If we were to do it live we’d have to figure out how we’d do it at all.”

Conaboy adds that the band also just embraces the opportunity to change their songs for the live show for the sake of improvisation. But that’s only another set up for Schwartz to take off on another joke. This time he likens the band to Fugazi and that they have 70-80 songs. He’s playing to the right crowd tonight because the room bursts into laughter again.

As far as adding the extra production, cut-up complexities and arrangements to Pleasure Suck, Schwartz says it wasn’t so much a conscious effort, as much as they were using the studio’s tools at hand.