Celebrating stories with Pecola Breedlove and The Freedom Party - WXPN 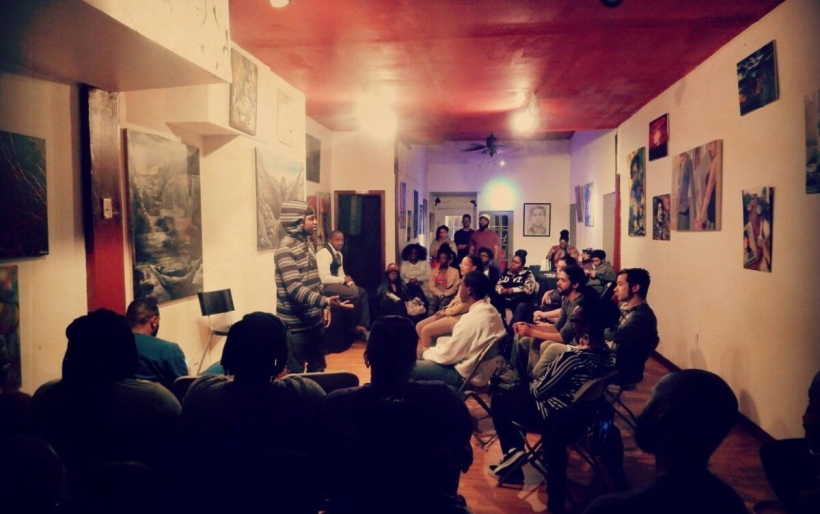 Celebrating stories with Pecola Breedlove and The Freedom Party

Why do they call open mics, open mics? Because open mics are invitations for artists to be open when they step up on the mic.

Imagine coming into a space that doesn’t require you to be perfect for entrance. A place where you can come to deal with shit, whether you’re an artist or a part of the audience. And when you come into the venue you instantly hear music like The Gap Band or The Backyard Band being played before the event starts. This event is none other than Pecola Breedlove and The Freedom Party. Located at A Poets Art Gallery at 4032 N Girard Avenue, Pecola Breedlove is a weekly open mic that has gained the attention of poets and fans of poetry whether they’re from the city or out of town.

KP Ultra, the Pine Bluff, Arkansas poet and founder of Pecola Breedlove and The Freedom Party, created a welcoming space for poets of the blue collar city of Philadelphia to share their stories on stage that has lasted for the past two years. I was able to sit down with him and to pick his brain on the Philadelphia poetry scene and discover the origins of the well-loved open mic event that has gained its city’s ears with their words.

The Key: How did the spoken word scene in Philadelphia look like when you first arrived?

KP Ultra: It was more harsh to me. It was a very aggressive scene. It was about proving yourself to a lot of people. But to me, in a lot of ways, it felt like hazing. It didn’t always feel very welcoming and I understand that people have to put the work in and earn respect, but a lot of out-of-town poets had bad stories about this city. Bad deals that had gone down financially, or something the host did at a show when they came into town. Me being an outsider, being from another state and another city, it was important for me to be a little bit more encouraging, welcoming, & inclusive rather than be exclusive.

“One of my craziest impacts from the space has been like the community of black and brown people that genuinely have open ears and genuine hearts for anything anyone else is saying. I’ve never been in a space where people listened to what other people were going through and what they’re experiences were.” – Parrish94

TK: Is that what you felt was lacking from the scene that you knew could bring to the table?

KU: There’s a few things that I think that were lacking. One was just putting a focus on the writing, putting a focus on the poetry. I’m coming along at a time where you have African American poets who are really focused on the writing where’s like ten years ago everybody is thinking about DVD’s and CD’s. Right now we’re thinking about publishing books and being read again is becoming important. So I’m trying to help with that as well, kind of help bridge the gap between the communities in Philly. You got that slam community that’s adults, youth slam, and college slam, then you have the open mic scene, and then you have poetry readings. All of those are different sections of poetry in the city, so I’m just trying to bridge all of those gaps.

KU: Poetry wasn’t cool for a long time and we didn’t have any outlets. Social media changed spoken word because people could get in real time of what was going on. A lot happened this weekend with the International College Slam. I get off work, check my phone, and I know the whole story within two hours. We didn’t really have anything like that before. So it really comes down to it not being documented and we’re not always doing the work to get it documented, but we’re doing more work so it’s happening. You have outlets like Button Poetry, we have Slam Find that’s recording poetry. YouTube has changed spoken word as well. People become fans of spoken word everyday just by going online, go on YouTube and listening to poems. It’s all changing, it’s changing right now. Within like the next two years we’ll have an outlet to find out about the spoken word community, whether that’s slam or whatever, you will have a place to go to find information. That’s all we need, just a source.

TK: Do you think that outlet would be best if it was just for spoken word or mixed in with hip hop, R&B, & other forms of art?

KU: Nah, it has to be separate because there’s so much going on in this world. If Rap Radar was covering everything Chris Brown was doing, Rihanna, or even Bilal, they wouldn’t do as well covering hip hop. So somebody has to focus in on poetry because if it’s just spoken word you could have a website that only focuses on slam poetry. You could have an outlet that only focuses on open mics across the nation.

TK: The Breedlove Tuesday events were inspired by the character, Pecola Breedlove, from world-renowned author Toni Morrison’s novel The Bluest Eyes. What were the characteristics of Pecola that fueled inspiration to the weekly freedom party that has been around for the past two years?

KU: One thing that we wanted to focus on was telling your own story. In the novel, you go almost the whole book without hearing directly from the main character, who is Pecola Breedlove. And in the analysis of the book she’s kind of lost her mind by the time you get to hear from her. And so that’s the thing about Pecola Breedlove and The Freedom Party, we want this open mic to be a space where you come so you won’t lose your mind. Everyone is dealing with their own thing, we had people dealing with depression, suicide, sexual assault. Someone hit me yesterday & was like “I don’t have $5 to come out. I’m in between jobs & looking for a job, but it’s been a year since my sexual assault.” They’re thinking about that, they’ve told me that they’ve been in a bad place and they just need to come out. That’s the type of space we’re creating here, a space you can come to that hopefully is a healing space for you. But the second part from the novel is that we celebrate who you naturally are. Pecola Breedlove was a little black girl who prayed for blue eyes everyday because that’s what she was taught the standard of beauty, to be white with blue eyes, and long hair. So this is a place where we celebrate who you naturally are whether that’s looks or what’s on the inside we try to celebrate who the person naturally is. TK: In the past two years, how has Breedlove evolved?

KU: In starting Breedlove I wanted to be more consistent than I was about building an open mic and making sure it’s expanding or doing all these other things. I think one of the mistakes I made in my past open mics was trying to make it bigger and always introducing these new things. With Pecola we want to put poetry front and center do that every week every damn Tuesday.

“I think people are more comfortable with asking for feedback, and I feel like that’s a big part of a poetry community is being able to get feedback for your work. It’s not a workshop, but I feel like passing around tips on writing and I don’t think that happened in the very beginning. But I know that it’s happened since I’ve been back  ” – Tracy Coretta

TK: What are some of your favorite Breedlove moments?

KU: Justin Graham putting out a fire. [laughs] We have all these people who help run the event. Like I host, call up names, introduce the artists, but you have all these people who have taken ownership of the event. So one day our vendor spills some oil or something and it broke out in a small fire. I’m on the other side of the room, I don’t know what’s going on, I just see about three or four people moving frantically towards the lobby area. I’m like “Man, what’s going on?” Only to find out there was fire, but the time I had got over there Justin Graham had put it out.

Justin Graham, singer / songwriter, who has passed February 1st of this year, who was this integral part of the event in general. That was one of my favorite moments. Of course a lot of really dope poetry and I guess the biggest thing that happens on a regular basis that I’m always excited about is getting to introduce new poets to the crowd.  You know we have a lot of black poets so you throw a white poet on stage that becomes a different theme. What’s their story? We talk about the black story a lot along the lines of gender and sex. We had a youth poet who identifies as “they,” as oppose to one gender, and that’s introducing that poet to this crowd and having people say that was challenging in a way but glad to experience it. That’s one of the beautiful parts of the event to me, being able to get these different voices and experiences on stage because it doesn’t happen everywhere. It’s like these people are a part of this certain community and these people are a part of this certain community, what we want to do is again kind of bridge those gaps between those communities in the city.

TK: You remember how in high-school there were different tables for different people?

TK:It’s almost like Breedlove is saying “Fuck all that, we’re all sitting at the same table.”

KU: The poetry scene is very much like the high-school cafeteria and we said “Fuck that, move all the tables. Let’s just get all the tables out of here. Everyone is going to interact.” That’s kind of what Breedlove is, it’s just like “Yo we’re not even going to sit down in here.” [laughs] You know what I’m saying? And we’ve had that, where the event ends and we move all the chairs out of the way and have a cypher.

TK: How will Breedlove leave its mark on the Philadelphia poetry scene in the next five years?

KU: It’s going to be the church that wasn’t a church. That’s really what it will be. Every Tuesday there’s a certain energy and a spirit in here. It’s a very spiritual place and not intimidating, not intrusive as far as anybody’s religion, spirituality is concerned. We definitely welcome everybody, we just ask everybody to respect everybody else in this space. But I think within the next five years what will be left of Breedlove is every Tuesday there’s this place in the city anybody can come. They can either perform or they can just sit in and enjoy the vent, be a part of the event and talk to people. Have it be a healing space and a safe space for everybody in Philly to take part of every Tuesday.

Pecola Breedlove and The Freedom Party happens every Tuesday at A Poet Art Gallery, 4032 Girard Avenue in Philadelphia. For more information, keep tabs on the event’s Facebook Page.