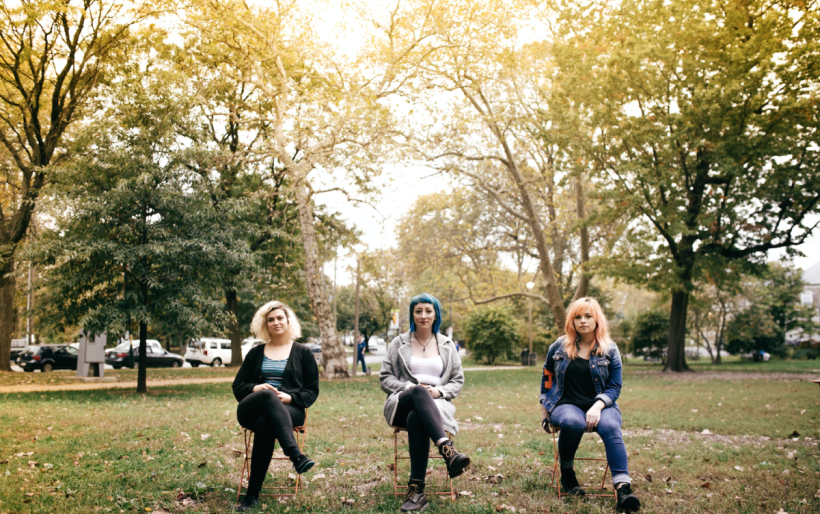 The concept of Plum Records came in a dream. Well, the name of it did at least. The idea of putting out music themselves was something Cayetana had toyed with for a while. And it wasn’t a decision they made without lots of consideration.

“I think the decision mostly was born out of the idea that we wanted as much control over the timing of the record and how it was rolled out,” drummer Kelly Olsen says. “Because, you know, we have a lot of friends in bands who have done a lot of different things and worked with a lot of different labels. Through talking with people, we kind of realized that to have as much control over how the whole thing happens and how it rolls out, to have control over our own product and music and creativity, we decided that doing it ourselves made the most sense. And it’s been working out really well. We’ve been enjoying it.”

And from that, Plum Records was official, and would be the imprint for Cayetana’s new album, New Kind of Normal. It’s a fitting name for the circumstances around putting this album out. Learning how to run a record label is pretty tough, to put it lightly. There were a lot of things that they weren’t aware of or didn’t know how to do, but they learned by doing, and now are starting to feel comfortable with it.

“It’s a good opportunity to learn, just like everything else we’ve learned by being in this band,” guitarist/vocalist Augusta Koch says. “It’s nice to know how to do it. I was sharing some things I’ve learned this week with friends. Like, ‘Oh, you guys should use this website. It’s really helpful,’ and, ‘Here’s a good way to track how your songs are doing.’ It’s really helpful to know.”

“We weren’t sure if it was the right decision,” bassist Allegra Anka says. “We had a lot of conversations about it, and were like, ‘Is this the worst idea ever? Would it backfire or flop?’ But I think we all have a really good intuition about what is right for us, and what we as a team and as a band know what’s going to work for us best. So we just went with that gut feeling and were like, ‘At least we have a sense of ownership and, I guess, control.’ Even if there are some aspects that aren’t as good as releasing on another label or something like that, it feels better because it’s a level of freedom and satisfaction that comes with it.”

The feeling of total creative freedom and control has created a new sense of excitement about this album, too. Everything is on their terms—the music, the release, the touring schedule. In the modern music industry, they also see the importance of a DIY unit run by three women.

“I think that women, and any under-represented community being more present and starting businesses, taking initiative or creating their own opportunities is super important,” Anka says. “We were talking to labels that were run by women, but they were part of the reason we were like, ‘Let’s just do this ourselves,’ because we wanted to see more of that.”

Still relating back to the name New Kind of Normal, the band acknowledges that the music industry is constantly changing. Bands and artists are always finding new ways to record and release their music. There’s not really any such thing as a standard way to do it anymore.

“Music is changing so much,” Koch says. “Even like Chance the Rapper is an example of someone who won a Grammy and never released something physically. It’s just changing so much now. People can release songs on just Bandcamp and be successful if they try hard enough. The rules aren’t set in stone the way they maybe used to. Being able to change with the times is important.”

“The old process isn’t the standard anymore,” Anka says. “The new standard is that people want new ways of doing things. They want to experience new ways of consuming music and something different.”

“I think we’re very lucky because this wasn’t out of the realm of possibility for us as an idea,” Olsen says. “We saw it and took it. I think a lot of people kind of wait around for record labels to accept them and then give them the best deal they can imagine, but it really could or could not be just as great of a deal as you can give yourself, if you can do that.”

What might have started as a pipedream (or a literal dream in the case of the label’s name) is now a reality for Cayetana. Making the album that they want to make and releasing it and marketing it 100 percent on their terms might’ve been daunting at first, but after some practice, it’s normal. For them, it’s the new kind of normal.

Cayetana celebrates their new LP at the First Unitarian Church on Friday, May 5th with Katie Ellen, Shannen Moser and Aster More. Tickets and more information on the show can be found at the XPN Concert Calendar.