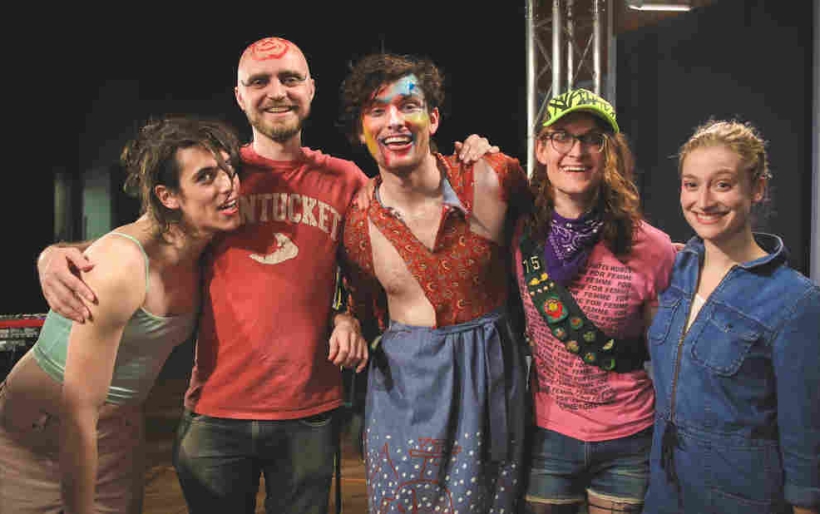 Adorned in rainbow face-paint and glittery makeup, and surrounded by special-guest friends, PWR BTTM shared their forthcoming sophomore effort Pageant with Talia Schlanger and the World Cafe crew in a session that premiered yesterday over on NPR.

In addition to the VuHaus video of “Answer My Text” that accompanied the session, which highlighted just one of the standout singles we’ve gotten to preview ahead of the LP’s May 12th release, the team also captured the short and spunky “Now Now” featuring backing vocals from Petal‘s Kiley Lotz.

Lotz, a musician we’ve come to know and love via Scranton, comes in at the chorus, lending Ponytail-esque squeals of “now!” in response to Liv Bruce and Ben Hopkins’ self-directed resolutions to quit being so hard on themselves. In quintessential PWR BTTM form, the duo takes the complicated topic of self acceptance and untangles it into a colorful, playful motivational message.

With its release date quickly approaching, Pageant is currently streaming in full on NPR Music’s First Listen. We’ve heard a handful of the infectious and vulnerable pop-punk tracks over the last few months, but for the full wonderful and wild picture head over here.

PWR BTTM will play a set at the upcoming Non-COMMvention ahead of a June 17th headlining slot at Union Transfer with Tancred and Nnamdi Ogbonnaya. Petal will also be in town in June, Joining Slingshot Dakota, Coping Skills, and Grayling at Everybody Hits on June 2nd.