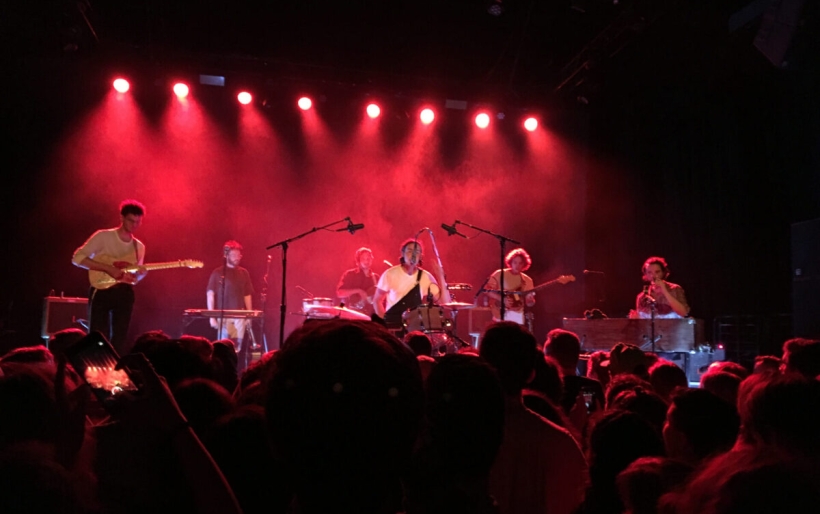 Whitney bring the joyous Light Upon The Lake to Union Transfer

On Monday night, Chicago indie rock band Whitney, who released their acclaimed debut Light Upon The Lake last year, played to fans both young and old at a packed Union Transfer. “This might be the biggest room we’ve played so far,” remarked vocalist/drummer Julian Ehrlich. “Get used to it!” exclaimed a voice from the audience, and he’s right. This talented six-piece, playing a modern version of soul/country-infused indie rock with catchy, cathartic melodies, only has larger rooms in front of them.

“The last time we were here in Philadelphia,” said Ehrlich, “We played at Johnny Brenda’s and there were five people there.” Whitney was started by Ehrlich (formerly of Unknown Mortal Orchestra) and guitarist Max Kakacek (of the disbanded Smith Westerns) in Chicago in 2015. Their set, which lasted a little over an hour, was made up of all the songs from their record, with a couple new ones thrown in as well. The show was opened by Richmond singer-songwriter Natalie Prass, who made waves two years ago for her self-titled debut. Prass’s band included Richmond musicians Andrew Randazzo on bass and DJ Harrison on keys and drum machine. She performed all new songs (“I just finished my new record a month ago,” said Prass) except for the longing “Bird Of Prey.”

All of these new songs had a distinct 80’s vibe, including the Karen Carpenter tribute ballad “So Far From You.” Several members of the audience held up lit lighters, which Prass said caused her to “hold back tears.” “It’s been a fucked up year,” said Prass towards the end of her set. “Thank you for sharing this community with me.” A little after Prass’s set, Ehrlich and Kakacek took the stage by themselves (with the former on keyboards) to open Whitney’s show with a duo rendition of “Gonna Hurry (As Slow As I Can).” After that, the rest of the band shuffled onto stage and Ehrlich moved over to his drum throne before busting into the Light Upon The Lake singles “Dave’s Song” and “No Matter Where We Go.” The set bounced back and forth between celebratory outings such as “The Falls,” “Follow,” and “Polly,” and more muted tunes like the title track, “Light Upon The Lake.”

The band showcased their musical abilities on the instrumental NOLA-influenced track, “Red Moon,” and on “Own My Own,” which began with a introductory jam. The band jammed more than you would hear at a regular indie rock show, coming off more like a modern day version of The Band (if Levon sang in falsetto while playing the drums). Props to trumpet player Will Miller, a major key to Whitney’s sound, especially when he would hit those extraordinary high notes. The audience was eating it all up, dancing and singing along to every word to these joyous songs, especially the na-na-na’s of “Golden Days.” After a brief intermission (and the crowd cheering for more), the band returned for their encore with new tune “Rolling Blackout,” a smooth hangover of a song strummed on the acoustic guitar. After that they jumped into a cover of NRBQ’s “Magnet” another rollicking soul jam ornamented with solos from the trumpet, keyboard, and Kakacek chicken-pickin’ on the guitar.

After trying out a quick rendition of the Golden Girls theme, the band jumped into their last song, the slow-building “No Woman.” Just when you thought they were done, Ehrlich thanked the audience before counting the band back in for one more glorious moment of emotional musical release. And that’s exactly what Whitney does best. Providing that musical catharsis that can only be obtained through live music.