Jay-Z prepares for Made in America with 4:44, a blueprint for the new generation
Recordings

Jay-Z prepares for Made in America with 4:44, a blueprint for the new generation

By putting introspective, complicated rhymes over captivating instrumentals, it’s no shocker that the album has received general acclaim from critics and has already gone platinum — thanks to the assistance of Tidal and Sprint — just a week after its release.

“Sometimes you need your ego, gotta remind these fools/Who they effin’ with & we got FN’s too”

The entire album is produced by legendary hip hop producer No I.D., who creates soulful beats that share the same sense of emotion from track to track, paralleling the album’s themes. By sampling The Alan Parson Projects an intro like “Kill Jay Z,” can sound like a second moment of clarity for Jigga Man as he embraces the impact of his ugly truths. Even Caribbean elements from the Fugees can make a song like “Moonlight” feel like the alluring hypnosis Jay-Z speaks of that keeps the hip hop repetitive and under its spell.

No I. D. also makes sure that the whole album is short, sweet and to the point. The 10-track album is only 36 minutes and each song is under five minutes, keeping the attention of listeners with a short attention span while putting Jay-Z in a position to get everything off his chest & say only what he needs to say instead of figuring out what more can he say. 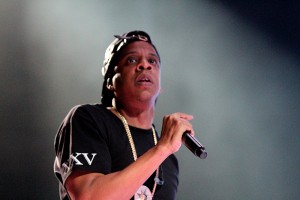 4:44 is limited to only a couple of featured artists, but each one makes sure to execute their roles in top form. Jay-Z surprises listeners on “Smile” by bringing his own mother, Gloria Carter, to recite a beautiful poem about how one can only smile when they feel free to be who they want to be. Singer / songwriter Frank Ocean adds melodies to Jay’s lyrics on “Caught Their Eyes,” and show how the truth can be spotted in the eyes of the fraudulent.

Reggae singer Damian Marley gives “Bam,” a rude boy attitude with his tunes while Hov does what he does best, gloating over beats & reminding people why he’s still king. Singer / songwriter The Dream assists the native New Yorker on “Marcy Me” which can be best described as a Hall of Fame speech from one of Brooklyn’s hometown heroes. Even the help of iconic singer’s/Jay Z’s wife, Beyoncé, voice on “Family Feud,” the respected MC takes both the old and new generation to church to call out both sides of their nonsense towards one another in hopes that they learn to win together instead of fighting one another.

The content throughout 4:44 feels like the blueprint from a concerned old head who wants the next generation to learn from his past and avoid the mistakes that he’s made. Take for instance “The Story of OJ,” where you have a veteran player encouraging younger players to think bigger than he did at their age and play the game of “wealth” instead of “rich” with lines like“Please don’t die over the neighborhood that your mama rentin’ / Take your drug money and buy the neighborhood that’s how you rinse it / I bought every V12 engine / Wish I could take it back to the beginnin’.”

Jay even gives advice about love on the title track, “4:44,”  by simply being honest about the mistakes he’s made in his marriage. Hov showed that even a God can feel pain once he senses that he’s close to losing the love of his life, verbally illustrating the emotions of Marlon Brando crying for Stella’s return or Denzel Washington begging Indigo to save his life.
The final track, “Legacy,” is the conclusion of Jay-Z’s blueprint for the youth. By destroying his own generational curse of poverty, Hov expresses the importance of passing down wealth to the next generation in order to keep the family name alive for generations to come. The discussion of legacy that he has with his daughter, Blue Ivy is similar to Mufassa showing Simba, his birthright of Pride Rock for the first time.

“What’s up Jay-Z? / You know you owe the truth to all the youth that fell in love with Jay-Z”

Jay-Z new album 4:44 is another reason why 2017 has been good for hip hop, but that’s not the only thing he has planned for this year. The hip hop mogul  recently announced a tour for the new album, and he will be co-headlining this year’s Made In America Festival on Labor Day weekend — his first time back to MIA since its inaugural year. Get tickets and more information here and stream the album below.
Related Content
View All Related Content