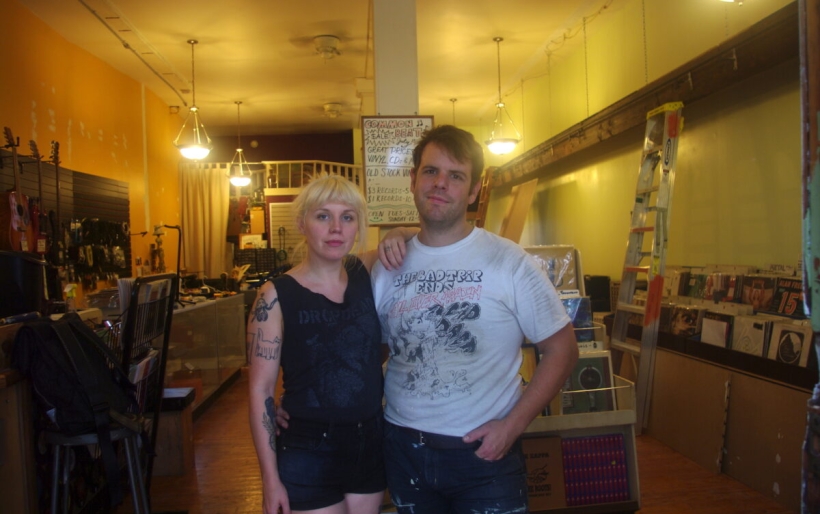 Last August 19th, Carlo Frese’s up-and-coming electronics and instrument repair workshop burned down in a house fire. He lost all of his guitars and amps, everything he was working on, even his tools. Nobody was hurt, but so much was destroyed. Today, almost exactly a year later, Frese and his partner Keri Girmindl are celebrating the opening of Common Beat Music, their store and repair shop at 49th and Baltimore Avenue.

Very much a catch-all music store, Common Beat will sell records, stereo equipment, instruments, and musical gear, as well as t-shirts and other related ephemera. The repair side of things will be just as wide in scope, Frese told The Key: “I’ll work on whatever. If it plugs in the wall and makes a noise, I’ve worked on it.” That assertive, no BS attitude informs a lot of the philosophy Frese and Girmindl have when it comes to running the shop, which is housed in the former location of Marvelous Music. That business closed in mid-July after 14 years first on 40th St. and then on Baltimore. The new shop will cater to both casual music fans as well as collectors. While Frese and Girmindl are both record nerds with large collections, at the end of the day they just really love music. “I buy records that I like to listen to and I use my records,” Frese explained. “I don’t put them on a shelf and let them sit there and buff them and make them nice.” The store inventory will reflect that.

Girmindl will be handling the bulk of the responsibilities for the record store side of Common Beat while Frese deals with the repair shop and the musical gear. She told The Key that she will focus on stocking the shelves with a mix of new and used records but not necessarily the flashy limited-edition represses that have become a common sight the past few years – think Record Store Day and the hubbub over that. Most record shoppers in West Philly, she explained, are “… not looking for a repress at $25, they’re looking for a slightly more beat up copy that’s well-loved but still sounds good.”

The other half of the shop will be a mix of stereo equipment, instruments, and the various cables, reeds, sticks, and strings you need to make those things work. Frese pointed out how few stores are left in Philadelphia that sell those products: “So many people in this neighborhood are, like, ‘Man, I wish I didn’t have to go to Cherry Hill to get saxophone reeds or drumsticks.’ We’re going to aim to change that.” He’ll be repairing everything from amplifiers and guitars to turntables and receivers. “Keeping the music going is so important, whether it’s for playing it back or making it,” he said. In addition to that, the two have carved out space for local musician and noted vintage t-shirt collector Perry Shall. “Perry is going to curate some part of the store doing his t-shirt thing and some of his other knickknacky toys,” Frese said. The two know each other from the punk scene and played in a Damned cover band last Halloween. The set list from that night hangs proudly on the wall by Frese’s repair bench.

While a vintage clothes and toys section might seem out of place at a record store, “This place can afford to be a little bit kitschy” Girmindl said. Frese agreed: “One thing that Philly has, [even] if it’s missing music stores, is a ton of record stores. And most of them are really damn good. So why just have another record store? What makes us different?”

Instead of competing with other stores – something the two reiterated again and again that they’re not trying to do – Common Beat is attempting to do something different. “Our record [selection] will be good,” Frese said. “But ultimately there’s all this other stuff and we have the space to do it.”

Ironically, Common Beat Music probably wouldn’t have happened if it wasn’t for the tragedy of the fire. A couple weeks after everything was destroyed, Frese was invited by the owners of Marvelous to move his business into the backroom of the shop. According to him, “By about mid-September I had a workbench built and I was up and running again and starting to do repair work.” Having a spot in the store, “Added a certain air of legitimacy to [what he was doing],” he explained. It also gave him access to more customers.

“All these other record shops in Philly are sending me people,” Frese said. “They all have my card or my flier on their wall and I get people from all over the city. So the initial attraction for Marvelous was these people who are coming from Germantown and Fishtown and South Philly are all going to come into your store to bring me whatever they want fixed and they’ll hopefully be interested in something you have.” He described the situation as “mutually beneficial.”

But in June there was another fork in the road and another big decision to make: Marvelous was closing and Frese was worried about what would happen to his repair business. Maybe the shop would be sold and maybe the new owners would want Frese to stick around. Maybe nothing would happen and he’d have to start over somewhere else. Certainly Frese and Girmindl had no intentions of taking over the store. Or as Frese put it: “It became an ‘Oh shit!’ moment.” After spending almost 11 months working out of the shop, he had a lot of ideas about what he could do better. Now he gets to put them into action. “We’re just going for it,” he said, a smile plastered across his face. “We have a certain amount of knowhow about stuff and how we want to organize things but for the most part we’re just fucking going for it.”

That was apparent from the moment they took over. What was Marvelous Music on July 14th became Common Beat Music a day later. Back stock was sold and the couple enlisted the help of their friends to paint and fix up the 900 square foot store in time for the August 1st soft opening and a grand opening party on the 5th. Most people would not even consider that kind of turnaround, especially as new business owners, but Frese and Girmindl were less concerned. They’ve both been part of the DIY punk scene since they were teenagers and felt like they could pull this off. “I was DIYing before I knew what DIY was,” Frese explained. When he was a kid he’d take apart guitars and amplifiers and put them back together to try and figure out how they worked. Now he’s applying that same creative curiosity and energy to running a record store.

“Being part of the punk scene definitely gives you [access to] a lot of people with a lot of skillsets to help out,” Girmindl said. “It makes it definitely more of a community thing for us.”

One of those helping out that day was Jenny Jams, a friend of Frese and Girmindl who was in the store painting the wall during the interview. “I’m a firm supporter of helping out friends when they’re in need,” she told The Key. “I think what goes around comes around and if you put good energy into the world then you’ll get it back.”

While the block the shop is on includes Talking Headz hair salon and Spirited Tattooing Coalition, which like Common Beat are owned and run by moderately-to-heavily tattooed punks with oftentimes loud, bright hairdos – and you can guess where those tattoos and haircuts come from – it also includes a very popular diner, a laundromat, and a small but well-trafficked variety store. It’s across the street from Cedar Park, which is filled with people from dawn to well-past dusk and occasionally hosts boisterous jazz concerts.

This is very much a neighborhood and more than anything else Frese and Girmindl want Common Beat to be a neighborhood music store. “We want this space to be a community hub for music,” Frese said. Considering everything they’ve been through to reach this point there’s no reason to believe they won’t succeed.