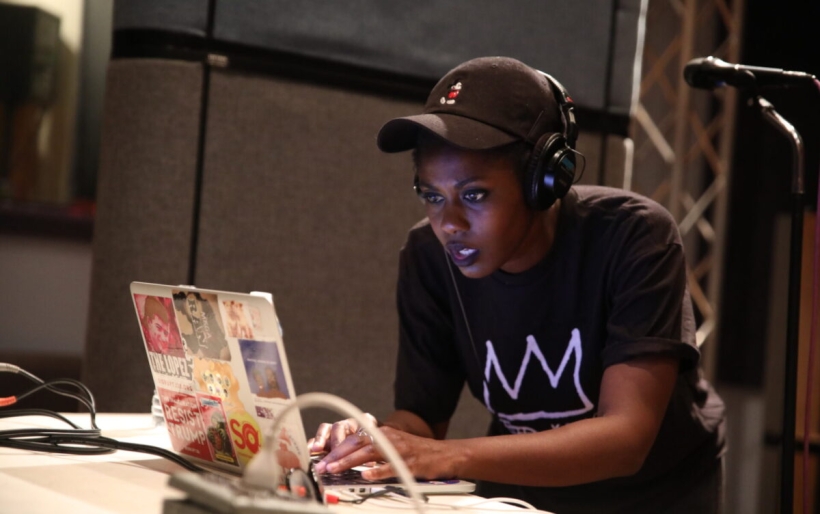 Earlier this summer, Enongo Lumumba-Kasongo — known to underground rap fans as SΔMMUS — wrapped up her grad school studies at Cornell University in Ithaca, New York, and relocated to West Philly, setting up a new base for her multi-pronged career as an artist, activist and educator.

SΔMMUS has been cultivating a following in the Bandcamp universe for several years now, going back to 2010’s Fly Nerd EP. Her 2016 full-length project, Pieces in Space, was picked up by the venerable New Jersey indie label Don Giovanni Records, where it caught the ears of Folkadelphia host Fred Knittel, who then passed it along to me.

As Fred describes her appeal: “She writes hip-hop for the weirdos, nerds, punks, outsiders and outliers, but also for the socially conscious, activists, feminists, and for those that need to be awoken.”

Last month, I collaborated with Fred and engineer James Clark Conner to feature a performance from SΔMMUS as our latest Folk-KEY-delphia Session — a series which has previously featured Harmony Woods and Shannen Moser. Below, watch videos of two incredible performances from the session — the don’t-put-me-in-a-box, boundary-smashing anthem “Mighty Morphin’,” as well as the powerfully personal reflection “1080p,” which ends on a breathtaking a cappella about self-care.

SΔMMUS has a select run of tour dates this summer and fall; find those below as well, and if you like what you see, we encourage you to dig into her catalog at Bandcamp.