The Laser’s in the Background: Andy Molholt gets down in the Dark Nuclear Bogs - WXPN 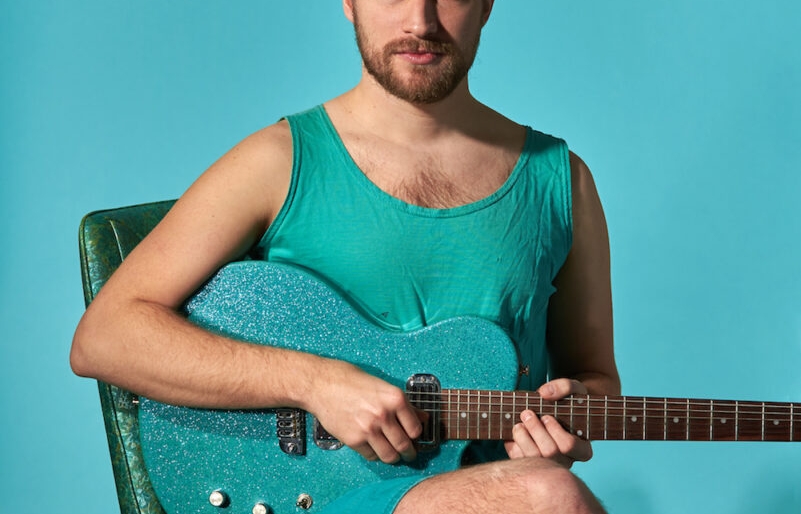 Laser Background | courtesy of the artist | Photo by Natalie Piserchio

The Laser’s in the Background: Andy Molholt gets down in the Dark Nuclear Bogs

You could lead with the cliché that Philadelphia multi-instrumentalist, composer and singer Andy Molholt has worn many hats since his time in this city as he’s started The Armchairs and Laser Background, as well as maintaining a position in Northampton, Massachusetts’ Speedy Ortiz as of late. But hat-wearing makes Molholt seem like a dabbler, which he is certainly not; not from the passionately somber and angry lyrics of Laser Background’s newest work, Dark Nuclear Bogs.

Bathed in the grey glow of personal plight its lyrical mindset, but ripe with the gauzy effervescence of neo-psychedelic sound, this– and Moholt – prove just how deeply committed once can be to cause, even if they’re wearing a mini-dress. Before his August 31 release party at Johnny Brenda’s Moholt spoke about kaftans, his father and the mess that is the present day.

The Key: Let’s get the Speedy Ortiz question out of the way: how often is that band a concern at this point and – as you have your hands in so many musical pies – do you ever forget with whom you’re sharing a stage?

Andy Molholt: I made friends with all of Speedy Ortiz in the past few years from playing shows together and through mutual acquaintances. Last September, they needed a substitute guitarist for a few shows and approached me about filling in. The shows went really well – really fun positive experiences – and it just kinda gradually morphed into me being in the band full time. I wouldn’t say that playing in Speedy is a concern per se – I’ve really enjoyed the experience so far and have been happy and feel fortunate to join their team. I would say that anytime you commit to something full time like that, it can put other priorities – in my case Laser Background – on hold, especially when things start to get busy. So after this tour, I will be chilling out on this project for a minute, but I definitely anticipating releasing more material as Laser Background eventually and am actually currently working on the next EP / LP. And…I haven’t quite forgotten which band I’m playing with on stage, but there have been a few moments in my life recently where I’m playing consecutive shows with different projects and hafta juggle the different sets in my brain…I actually love that feeling. It’s fun. And a challenge, which I value.

TK: I met you not long after you got to Philly, and formed The Armchairs. Did you come here specifically to armchair – and why? What was so special about that band?

AM: Yes, I did move to Philadelphia specifically to start The Armchairs. I actually chose living in Fishtown because I wanted to play at Johnny Brenda’s, not realizing that in 2007 it had just started doing shows. That band was a really special formative experience for me. Armchairs was my first time taking a band really “seriously” – if you can call it that – and my first foray into extensive touring. I still play with Chadwick all the time – he’s my best friend and he’s actually been playing drums with Laser Background for the past two tours. What made it special? It was a platform for us all to feel true artistic freedom, like anything was possible, and we certainly pushed ourselves to the creative limit, maybe even to our own detriment. I look back at that time of my life fondly, for sure.

TK: You have a somewhat theatrical way of dressing – I think I’ve spied photos of you in teal mini dresses and mod kaftans. Was your mom always cool with that? I have my own long history of discussions with my mom, a designer/seamstress, about my youthful modes of dress.

AM: I don’t think it was actually a teal mini-dress, just matching shorts and tank top. But yeah, my mom is an amazing human being and has definitely always been down with me fully expressing myself, sartorially or otherwise.

TK: The notion of psychedelia: you seem to be able play it by rote. You can make it willowy or test its limits. Your stuff feels and sounds different from psychedelic music’s origins. Why choose that as a musical playground in which to splash around and how did you set out to make that mood your own?

AM: Truly, I don’t even self-identify as “psychedelic.” Like, sure I’ve experimented with psychedelic drugs…is that what the genre even means anymore? I just write the songs I write and am influenced by the music that I’m influenced by. I don’t think I’ve ever made a conscious decision to write in a particular genre. I would say that my style has naturally evolved over the years, and that’s just a result of me sharpening my ideological pencil point.

TK: Influences change, or at least mine do. What or who or where has been the one most recent inspiration on your aesthetic value that turned your head or work around?

AM: Good question. I would agree that influences definitely change. As far as recently, I have honestly been most influenced by the projects of my friends. Some examples are J Fernandez, Plum Professional, Jo Passed, Guerilla Toss, Celestial Shore, Ava Luna, Mild High Club. I feel like in some cases contemporary bands that play or tour together end up influencing each other in positive ways…I think that’s one of the coolest things about being part of a musical community.

TK: What was the first song penned for or around Bogs that would have steered the course of the entire album and why did that one song do as much?

AM: Definitely “Hymnals.” I started writing that song in like…2009, back in The Armchairs days at the first house I lived at in Fishtown. It was one of those persistent melodies, in that I wrote it, completely forgot about it, and then years later in came flitting back to me as I was noodling. I couldn’t remember the chords or alternate tuning I had used, but I rewrote the song to fit my current mood at the time – dark – and then used that as a bit of a guiding principal for the rest of the record.

TK: Why Georgia in a lake house to do the new album? What did the Southern breezes bring that Philly couldn’t?

AM: I had this notion of making a “destination record.” I wanted to take a chunk of time, bring a specific palette of instruments an gear, and just make the record in one fell swoop. Making an album doesn’t have to be complicated or stressful, and I feel that too often when making a project over a long course of time, you can start to lose the spark of inspiration that you were going for in the first place. So that was my real idea of going somewhere isolated. The lake house in Georgia just happened to be available, through a close friend, and that’s why we chose that spot. It did help that it was in a really beautiful location on a lake! That was nice. For what it’s worth – the experience was so overwhelmingly positive that…if I had the option, I would only make destination records from now on. Highly recommended.

TK:  Why call the new album Dark Nuclear Bogs with its birth-to-death apocalyptic vibe? Did Leonard Cohen die or something?

AM: Oh boy. The world has been pretty fucked lately, huh? When I was initially writing the songs for this record, I was going through a bad breakup and was just in a really dark place. That kinda set the tone for the album.  My father had also been sick for quite some time  – and eventually passed away, only a few months after we tracked this album actually. I felt like the birth/death motif lined up nicely with my obsession with the idea that within the darkest dark you can also find the brightest bright. I had also come up with the anagram “Dark Nuclear Bogs” (of Laser Background) for a secret show, and that set me off in all these ways because…my father’s life work was centered around nuclear science, the songs already had kinda a swampy feel, and in the case of “Hymnals,” I had already used the word “swamp” in the lyrics. The vibe was dim overall. It just kinda clicked. Makes sense in my head, anyway.

AM: I met Ava Luna at a show we played together at Golden Tea House back in 2014. We hit it off, and Carlos and Julian had asked me if I ever wanted to make a record together. Up until that point I had only recorded with a few close friends, so taking a chance seemed like a good idea. We made Correct together, and it was such a positive experience that I decided to repeat the process with Dark Nuclear Bogs. I have a feeling we’ll probably do it again. Also worth noting that Julian and I have started a side project called “Coffee” that I’m really excited about. Not sure what you mean about them eating like people, but if there’s one thing I’ve learned it’s that Ava Luna eat like…machines.

TK: Can you imagine your life without music – and if it had to be, what would you fill it with?

AM: I was actually thinking about this like two days ago while driving. I can imagine it, absolutely. Although, if I dropped out of “the game” so to speak,  I would absolutely still make music and probably record in my free time. How far down the hole are we going here? Did I lose the ability to use my hands? If I couldn’t make music at all, I would go fucking insane. It’s compulsory for me. I need it. It’s therapy. As far as dropping out of the silly trivial rat race of the music industry goes, yes I could imagine it. I think whatever else I did would be me trying to help as many people as possible. Not sure what that would look like precisely. Both my parents have helped tons of people in their lives, and that it is a bit of an ideological sticking point for me. I think we should all try to do whatever we can to help anyone out that we can in life, and only punch up.

Laser Background headlines Johnny Brenda’s on Thursday, August 31st; tickets and more information on the show can be found at the XPN Concert Calendar.