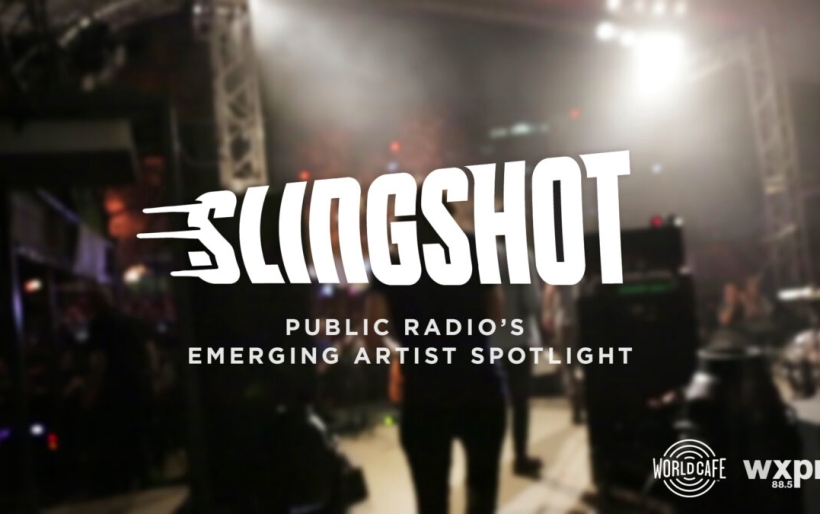 Teased this spring at the annual NonCOMM-vention, the new programSlingshot is an artist-championing collaboration between NPR Music and 18 VuHaus member stations — including founding stations WXPN, WFUV, KCRW, KUTX and The Bridge.

Over the summer, programming staff from the member stations each nominated a handful of artists to throw their support behind over the coming year. The submissions were reviewed, and the stations came to a consensus — Big Thief, Jamila Woods and Lo Moon would be backed by Slingshot affiliates through interviews, editorial coverage, live performances and more over the next several months.

“Everybody in this room knows the impact of public radio on artist development,”  XPN general manager Roger LaMay told the crowd at NonCOMM this spring. “It’s really been essential with NonCOMMs and public radio writ large to pool our resources and work together to grow our impact.”

Slingshot’s network of features can be anything from a World Cafe session to a Tiny Desk Concert to a spot on Morning Becomes Eclectic, and many artists already navigate their way through this path organically. But as NPR’s Anya Grundmann said at NonCOMM, “We thought it would be much more powerful if we packaged it…and made it about folks we collectively in public media believe in, and do it with the biggest muscle we have.” WHAT THEY DO: The folk rooted indie rock project of songwriter Adrianne Lenker made its debut last year with the excellent Masterpiece LP; the band returned in quick order for this year’s fragile and introspective follow-up, Capacity. In the interim, they visited the Philly region relatively often, playing dates with Eleanor Friedberger, Frankie Cosmos and Strand of Oaks. They also recorded a live set for The Key Presents in local record store Brewerytown Beats. WHAT THEY DO: First catching the ears of many through inviting vocal hooks on Chance the Rapper’s “Blessings” and “Sugar Candy,” this singer-songwriter made her debut last year with HEAVN, a genre-defying album that includes collaborations with many of her Windy City peers, from Noname to Saba to Donnie Trumpet. When Woods isn’t onstage or in the studio, she is the associate artistic director of the community nonprofit Young Chicago Authors. WHAT THEY DO: Though they only have a handful of songs to their name at present, the West Coast three-piece thinks big. Their songs are towering and expansive dreamscapes, reminiscent of mid-70s Pink Floyd as much as Elbow and Spiritualized. Building on the momentum of this spring’s buzzing single “Loveless,” they’re prepping a record for a 2018 release.