"The Night R.E.M. Became My Favorite Band": Reflections on the Monster tour's three-night stand at The Spectrum - WXPN 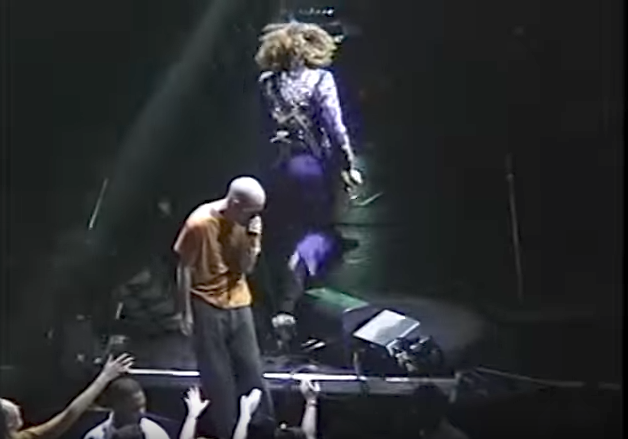 R.E.M. at The Spectrum | still from video

“The Night R.E.M. Became My Favorite Band”: Reflections on the Monster tour’s three-night stand at The Spectrum

Athens, Georgia rockers R.E.M. were at a crossroads in 1995.

The band — Bill Berry, Peter Buck, Mike Mills and Michael Stipe — had won international acclaim and mainstream success after a decade-and-a-half upward climb through the independent music scene of the 80s. Propelled by MTV and the burgeoning alternative rock radio format, their albums Out of Time (1991) and Automatic for the People (1992) generated massive hits like “Losing My Religion” and “Man on the Moon.” But the band also spent those early years of the decade somewhat reclusively, not touring and making only scattered public appearances.

Following the ballad-heavy introspection of Automatic and the psychedelic orchestrations of Time, 1994’s Monster LP —  the band’s ninth — saw it embrace the limelight once again. Widely heralded as R.E.M.’s return to “rock,” or at least rock signifiers like amped-up guitars and blistering drumbeats commingling at a propulsive pace, it added more massive hits to the canon — “What’s The Frequency, Kenneth?”, “Bang and Blame,” “Crush With Eyeliner.”

But when the band prepped for its Monster tour, which launched in early 1995, it was very conscious of its position: these were four guys in their mid-30s who had been playing together for a over third of their lives. They had an audience hungry to see them perform and the wind of several successful releases in their sails, but their lives were also evolving in different directions — families were being started, new cities were being settled down in — and all this amid a turbulent, ever-changing industry.

This was the R.E.M. that came to Philadelphia for not one, not two, but three headlining nights at The Spectrum in South Philadelphia on October 12th through the 14th of 1995.

These shows are, to rock fans who today are in their mid- to late-30s, somewhat legendary; newcomers saw them for the first time on this tour. Enthusiasts saw all three nights — and the band played to the devotees with varying setlists leaning heavy on Monster and newer-than-the-new-album tunes, stuff that would make up 1996’s New Adventures In Hi-Fi. Mega-fans even followed them across the country, show-to-show. And thanks to Philly videographer Markit Aneight, video of all three Spectrum performances is on YouTube for your viewing pleasure, beginning with the October 12th show.

I asked Joe DeCarolis — bassist for Philly bands Hurry and Psychic Teens, and a huge fan of R.E.M. — to reflect on being in the audience during the band’s three-night stand. Here’s what he had to say:

Seeing R.E.M. at the Spectrum on 10/13/95 changed everything I thought about music. They did so many things that young me never thought a band selling out arenas might do. I remember hearing or reading interviews where they plainly stated that this would not be a greatest hits tour; they would be playing mostly Monster material and songs written while on tour. That night, I found that the energy of a set like that tops any nostalgia set. All of my favorite shows since then have been mostly new material. Hearing a new song for the first time in a live setting is maybe the most exciting moment of any show for me.

That night, “Revolution” left a huge impact on me. Of course, that one wouldn’t even make the next record. They also played “Binky the Doormat”, “Undertow”, and “Departure”, and all of a sudden I COULD NOT WAIT for their next album. (“The Wake-Up Bomb” was already really familiar to me as I’d taped their MTV awards performance of the song and watched it endlessly.) Not that I was totally immune to wanting to hear the old songs – since I wasn’t expecting any, it made the appearance of “So. Central Rain” in the encore a huge surprise. And the louder live arrangement of “Man on the Moon” gave me a whole new appreciation for a song I already loved. Just like seeing new songs, alternate arrangements became another favorite moment of shows for me. It’s what keeps me going to see some bands over and over again (and hoarding live recordings).

I was a pretty big R.E.M. fan before the show, but I hadn’t dug TOO deeply into the back catalog. I had Automatic, Monster, Eponymous, and my good friend Adrian (currently in the excellent band Readership!) who knew all the material (and b-sides) much better than me. We’d hang out and play guitar and geek out over musical minutiae. He got tickets to this show for his birthday and offered one to me. We talked about what the set list might be like, what we thought they’d DEFINITELY play, what seemed unlikely but possible, and the absolute uncertainty we’d get to hear “Radio Free Europe” live. The flow of the set was perfect. The one-two punch of “I Took Your Name” into “What’s the Frequency Kenneth?” worked as a mission statement for the show and electrified the room.

They knew exactly when to work in the slower songs. “Star 69” ended the main set before they came back to a wash of noise and feedback for “Let Me In.” I liked noise in my pop songs before this, but I’d never heard anything like the dense saturation of this. It shook the seat. I’d never FELT noise like this. A band that I’d always considered a “mostly quiet” band (despite the publicized return to rock of Monster) owned that stage with so much passion and energy that it completely changed my view of them. I went into that show as a fan and left obsessed. I’d seen a few shows before this, but none that transformed my idea of a band. It set the bar for basically every show I’ve ever seen since.

Watch the October 13th show below.

Philly writer M.J. Fine is easily the biggest R.E.M. fan I know, and spent the summer of 1995 following the band around the country from city to city on a Greyhound bus. She shared these thoughts on R.E.M.’s arrival at The Spectrum that fall — the 19th, 20th and 21st shows she saw on the Monster tour, caught during her sophomore year at American University in Washington, D.C.

On Thursday, I took the train from D.C. — where I was trying to find the balance between attending my sophomore-year classes, practically living at the student-run radio station and following my favorite band — and met up with one of my tour buddies just in time for the show. I caught enough of Grant Lee Buffalo to confirm that they weren’t as dull as Radiohead, who’d put me to sleep with their opening set in Hershey in September, but also that I’d never like them as much as Luscious Jackson, who’d won me over with their sunny grooves in June.

On Friday, I brought my best friend and my dad, who seemed to enjoy themselves. And on Saturday, my brother and I met up with my tour buddy on the early side in hopes of hearing R.E.M. soundcheck some of the songs they were working on for what would become New Adventures in Hi-Fi, but found only Grant Lee Buffalo.

As for the shows themselves, the first night seemed rote; the second had more energy, with better banter and a surprise cover of Chris Isaak’s “Wicked Game.” Mostly, I was glad that Natalie Merchant, a longtime friend of the band and my own personal nemesis, remained in Upper Darby, where she was playing the Tower — and stayed away from the stage at the Spectrum. The third night was the best of the run, a confluence of great seats, a good audience and smooth moves from Michael Stipe, who also smuggled a snippet of Tori Amos’ “Winter” into the encore.

But while I had a fine time at the shows and enjoyed spending a weekend in my own bedroom at a time when there was too much drama in the dorm, I can’t say that R.E.M. were at their best in my hometown. Other cities got warmer crowds, wittier repartee and greater setlist variation.

Compare their run at the Spectrum, where 22 songs were played all three nights and only three originals didn’t repeat at all (“Try Not to Breathe” on Thursday; “Welcome to the Occupation” and “So. Central Rain” on Friday), with their three-night stand at Madison Square Garden, where a dozen songs rewarded the most devoted fans (“Drive,” “Me in Honey,” “I Don’t Sleep, I Dream” and “Star Me Kitten” on Night One; “Circus Envy,” “Welcome to the Occupation,” “Half a World Away,” “Orange Crush” and “So. Central Rain” on Night Two; and “Disturbance at the Heron House,” “You” and “Near Wild Heaven” on Night Three).

Fine also kept a meticulous tour journal, which she shared excerpts from — you can find those below this video for the October 14th Spectrum show. Were you at any of these shows? Were you at all of these shows? Did you too follow the band from city to city during the summer and fall of 1995? Leave your own memories of them in the comments.

Good seat — row 11, Peter’s side on the floor. Aisle again. Grant Lee Buffalo had already started when I got to my seat. Not bad, but not my thing.

Michael asked again for people to throw off their clothes, and many did. Peter seemed annoyed by this; Scott (in yellow, black and white jacket) seemed amused. Nathan wore red jeans and black T-shirt; Lindros #88 Flyers jersey during encore. Young people next to me, smoking and requesting old songs.

Aside from “Hot Java,” the only difference between setlist tonight and last show I saw was substitution of “Begin the Begin” for “So. Central Rain.” They seem to be in a rut. Michael asked audience by a show of hands how many would be at tomorrow night’s show. Lots of hands raised. Maybe that’ll shake them up. A better show than last night. Someone in audience had a sign saying “Chicago-Detroit-New York-Philadelphia. Thanks Mike Mills for the drumstick. See you in Washington” and Michael had Mike say, “You’re welcome.”

Relieved that Natalie Merchant, at the Tower Theater tonight, didn’t show up. …

… Walked in rain to train station; took 1:49 to Suburban Station, Broad Street Line to Pattison. … Hung around for hours. … Heard Grant Lee Buffalo’s short soundcheck, but it seems R.E.M. didn’t soundcheck. Talked to two girls who’d been to all three Philly shows. … Into building at 7 p.m. …

I sat in row 5, between Mike and Michael. People on right arrived after R.E.M. began. People on left were older fans who’ve seen many shows. Good performance tonight, very enjoyable. I held my Patti Smith T-shirt up at end of “Everybody Hurts” and Michael sort of smiled at it.

Highlight: a snippet of Tori Amos’ “Winter” before “It’s the End of the World As We Know It (And I Feel Fine)” in place of something about chocolate cake last night.

Stipe mentioned Lance Bangs for the third night in a row. R.E.M. at The Spectrum | still from video