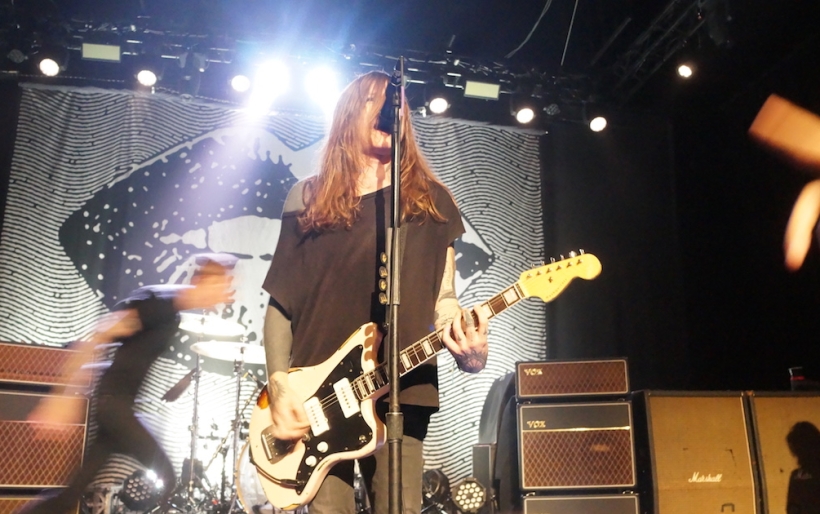 Against Me! brings a sense of community to Union Transfer

During the drum intro of “Transgender Dysphoria Blues” frontwoman and trans hero Laura Jane Grace of Against Me! announced that she feels uncomfortable in her body 99% of the time, but the 1% of the time she feels comfortable “is right up here onstage with all of you.” That moment, which was about halfway through the set, was a victory for anyone who had been marginalized, picked on or harassed because of how they look, because of who they love, because of who they are. It allowed people to let their guards down, and the crowd’s energy became noticeably more enthusiastic as a result.

That’s not to say it wasn’t enthusiastic to begin with, mind you. From the very beginning of the show, which kicked off with “True Trans Soul Rebel,” the show had all the characteristics of a killer punk show – tattoos, denim vests covered in patches, and enough mosh-energy to power ten city blocks. But by the end of the show, that figure probably doubled to 20. The setlist was peppered with old favorites, like “New Wave,” “Up the Cuts” and “Jordan’s 1st Choice,” which Grace said was influenced by her remembrance of playing The Fest, an annual punk rock music festival located in Gainesville, Florida, Against Me!’s hometown. Fans appreciated the old stuff, but the setlist was noticeably light on some of the band’s best recent material; “FuckMyLife66” was a notable forgotten track. There were exceptions to the rule, however, including the aforementioned “True Trans Soul Rebel” and “Transgender Dysphoria Blues,” but also “Black Me Out,” “Provision L-3” and “Unconditional Love.”

The first time I ever saw Against Me! was in 2008 when they opened for the Foo Fighters at The Spectrum. A lot has changed for the band since then. The only remaining original members are Grace and guitarist James Bowman. But most of the changes are positive, and that’s not only because of Grace’s brave transition. For instance, they brought on Atom Willard, who, if you don’t know by now, is the greatest freakin’ drummer in rock music today. Also, the music has gone from great to even better – namely with the group’s second most recent studio release, 2014’s Transgender Dysphoria Blues, which will easily go down as one of the decade’s most important albums. Following it up would prove to be a nearly impossible task, but 2016’s Shape Shift With Me proved still to be a worthy listen to its precursor and then some. Let’s see where the band takes us and shapeshift together, shall we?