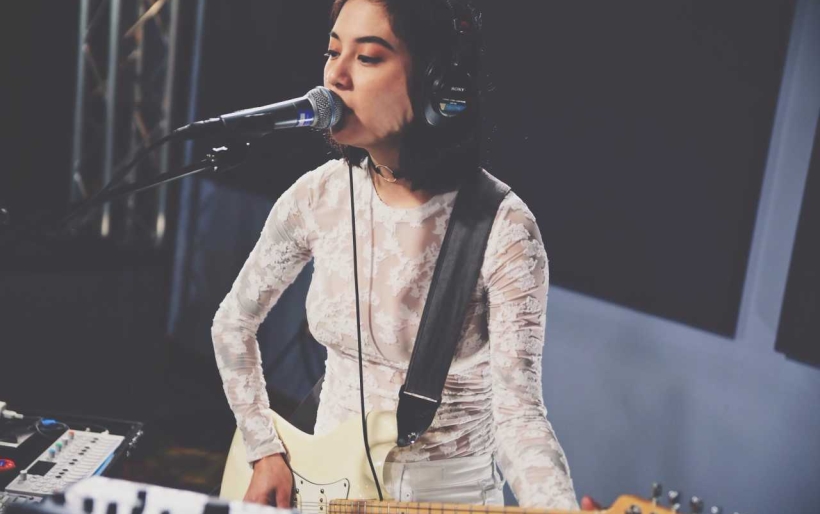 A lot’s been said already this year about Japanese Breakfast — not to mention its driving force: singer, songwriter and multi-instrumentalist Michelle Zauner.

Candid and vulnerable lyricist. Charismatic and inspiring frontperson. Tight and transcendant live band. Sonic visionaries. Near-universal acclaim for JBrekkie’s Soft Sounds From Another Planet has come in from all corners — The Guardian to The New York Times and NPR — and it is, quite frankly, incredible to see, as we’ve been fans of Zauner and her bandmates in their various forms over the years. She and bassist Deven Patrick Craige go back to beloved punk four-piece Little Big League, she goes further back to Post Post and her production partner (and drummer) Craig Hendrix has worked with anyone from Birdie Busch to Jesse Hale Moore, The Dove and the Wolf and his solo project Auctioneer.

The band is rounded out by guitarist and keyboardist Peter Bradley, and it’s safe to say that Japanese Breakfast has become the highest profile pursuit that any of these Philly-rooted musicians has taken on…and rightfully so. Beyond the emotional hook of Zauner’s songs — which, on Soft Sounds, dissect human connection and communication, positing that our only barriers to intimacy and trust are one another — the band has a tremendous ability to translate that emotion sonically, to make listeners at home and folks in the crowd feel what they are feeling.

We see and hear that in the studio session Japanese Breakfast recorded live at WXPN — a collaboration between The Key Studio Sessions and the Indie Rock Hit Parade Live Sessions. Blasting off with the expansive and determined space rock of “Diving Woman,” the band gives a handy survey of Soft Sounds‘ stylistic variety. The sweeping arrangements of “Boyish” channel broken-hearted orchestral pop of the twentieth century, while the very contemporary sound of “The Body is a Blade” searches for strength in the wake of trauma.

Live show standout “Road Head” gets a fantastic performance here, and the band moves to a gliding groove as Zauer rocks a sampler and ruminates on dispelling toxic relationships. Watch a video of that song below, via VuHaus.

Japanese Breakfast just got home from a European Tour, and at the end of the month heads out on its first run in Asia; dates for that can be found in the flyer below. No Philly dates are on the horizon at the moment, but the band did just play a killer, sold-out gig in the basement of the First Unitarian Church. Read our review of that show here, listen to Japanese Breakfast’s Key Studio Session / Indie Rock Hit Parade Live Session below, and grab yourself a copy of Soft Sounds from Another Planet via Dead Oceans.