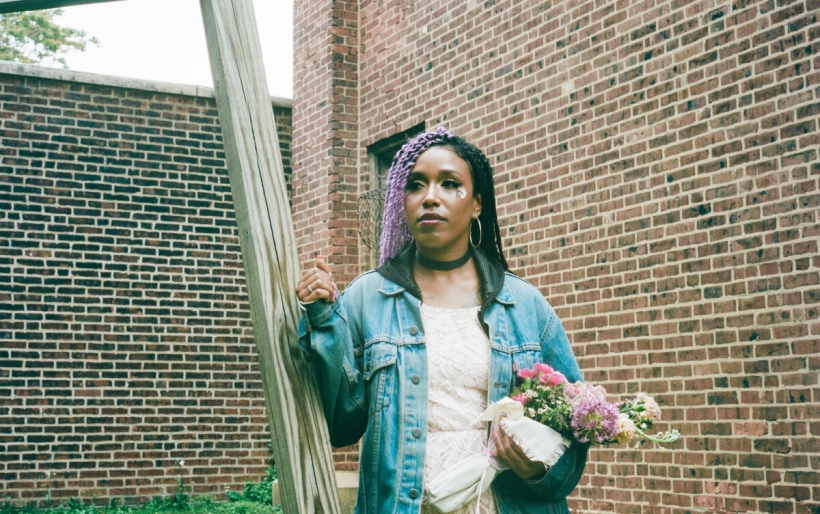 Awakening the Feminine: Mhysa’s E. Jane on harnessing the power of softness

Conceptual artist E. Jane is, to put it in their own words, “always working on all cylinders.” In addition to pursuing an M.F.A. in interdisciplinary art, which they completed last year, E. has been performing as one half of the electronic duo SCRAAATCH since 2013, and exhibiting work in galleries across the globe for nearly as long. This summer, E. stepped out as a solo musical act, releasing fantasii, the debut album of their popstar alter-ego, Mhysa.

On fantasii, which is set for a vinyl release later this month, music is imagined as a space of resistance for Mhysa and other Black women and femmes, foregrounding joy, affection, and sexuality as a gesture of opposition to those who would rather hold them down. The Key spoke with E. about the origins of the Mhysa project, the intersections of art and music, and the nature of resistance. E. Jane: When I came up with the tagline “underground popstar,” I was probably about 25. It was interesting to think about someone wanting to make music that can traverse pop and also the underground while not being interested in mainstream success. There’s so much more than the mainstream that needs love, and needs music. In terms of the cyber resistance, I was thinking a lot about Hunger Games and Game of Thrones, and about the strong women figures in those shows – like Katniss in Hunger Games, who’s the symbol of rebellion and resistance. I was thinking about how weird it was that this person in a somewhat privileged body would be the representation of resistance, but also acknowledge that there are people actively resisting a very violent time. It’s a continuous violence, but a lot of people online are starting to speak up about it. I was thinking, “Wouldn’t it be great to be – to create, even – a symbol of resistance, for the energy bubbling online” – against patriarchy, and capitalism, and those things.

TK: Can you explain the origin of Mhysa, and how Mhysa and E. Jane interact with each other?

EJ: Going back to Game of Thrones, I was thinking a lot about Khaleesi. There’s this big episode where she frees all the slaves, and they call her “Mhysa,” which means “mother.” There’s that iconic frame of her body surrounded by Black and brown bodies, all with their arms up towards her, which is a very disturbing propaganda image for me. I was thinking, “I’m claiming that, I’m stealing that back.” Thinking about my interest in Black liberation, I thought it was a befitting moniker to take.

In terms of working with my fine art persona – in grad school I was super masc leaning, because it’s really hard to express femme energy in academic spaces. And, the world is really violent towards femmes – for a while, I was like, “I just need to protect myself.” I’m on a spectrum of gender, depending on what environment I’m in, but in grad school I started to feel like I couldn’t even perform femininity anymore, especially competing with all these men, and trying to assert myself, and assert that my work had power. But I know that I can perform femininity if I want to. So through Mhysa, I started awakening a part of myself that I thought I had lost.

TK: How does the cover art for fantasii reflect or relate to the project as a whole?

EJ: I had it shot by Naima Green, and I did the set design myself. I feel like the cover art represented my fantasy for myself and other Black femmes to be able to reclaim their femininity, and reclaim softness. There’s also this surreal quality to it. I warped the flowers in the bouquet, so in the very center, the flowers are slightly runny. It’s this beautiful, lovely image, but also distorted. I felt that that was sort of queering the image – I wanted something that was soft and feminine and queer. And then also thinking a lot about Black death – people keep bringing up to me that it looks like I’m sitting in a coffin, but I’m looking at the camera like I’m alive. That was an accidental statement, because I think the flowers for me were more about opulence, but also, I do feel the resistive nature of saying, “We’re not dead.”

TK: Who were your other collaborators on this project?

EJ: I worked mostly with my partner [in SCRAAATCH], lawd knows. We did a lot of the production work together. Then, with Diamond Stingily, I requested that freestyle. We had been talking about rapping, and she just sent me some raps. Diamond’s a conceptual artist and a poet too, and I love that another conceptual artist is out here, just rapping in their spare time. And our conversation about rapping made me feel more comfortable about rapping, so I made “Strobe,” and I was like, “Well I have to include Diamond’s rap on the album,” because “Strobe” wouldn’t exist without Diamond. She was really generous, she just did it, sent it to me, and was like, “You can do what you want with it.” As far as collaborators, that was sort of it. I went a little isolationist for this album, and didn’t collaborate a lot, because I wanted it to come from my heart. I just sat inside for a year, on and off, and chipped at it. EJ: The biggest way that being an artist informs the way I work in music is that I identify primarily as a conceptual artist that focuses in performance. Getting the courage to sing and dance and move around a stage was something that I don’t think I would have been able to do on my own without performance art, and the way that performance asks performance artists to push themselves to their limits. I really wanted to go ORLAN with it, go full body performance artist. That framework allowed me to be super serious about music. In terms of how music informs my art practice – I think that music fuels my art practice, because a lot of the projects I’ve done that resonate with people the most are centered around music; they’re just centered around music as an archive, or the history of music. Music is my anchor.

TK: So much of what’s been written about fantasii and what you’ve said is very political in nature, but the songs on the album, by themselves, don’t necessarily resonate as political songs. Do you think there’s something inherently political just in the act of creating?

EJ: Not necessarily, no. Evil has gotten really banal, and sometimes I think that the resistance has to get as banal as evil to fight back. Last year, a lot of the newsfeed that I was dealing with was just, “Black death” over and over and over again. It puts us on this hamster wheel where all we’re talking about is our emotions, about how that makes us feel. How does it make me feel that my body’s in danger? How does it make me feel that so many Black women keep dying? I think about things other than how it makes me feel that people keep wanting me dead, and those things deserve space too. In a time when people only want me to talk about my feelings about politics, it’s political for me to talk about how I feel romantically, too. It’s political for me to feel vulnerable about needing love, wanting sex. It’s deeply political to be expressive about those things, especially as a woman. We aren’t liberated yet. photo by Naima Green | courtesy of the artist