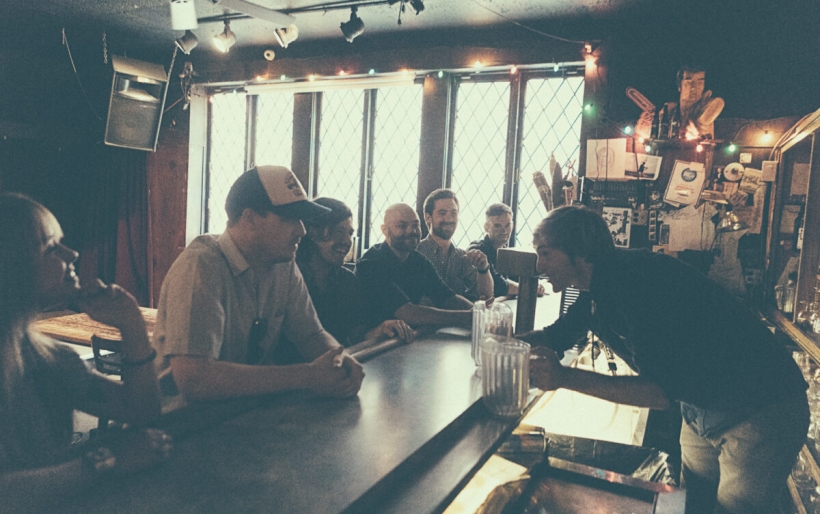 Secret American is a project of two coasts. A couple years back, frontman Derek Krzywicki found himself living in Southern California, where he moved with his old band Cheers Elephant. After parting ways with those guys, he began melding a retro-rock songwriting style with his unstoppable charisma onstage and at the microphone. But Krzywicki is a Philadelphia-area native, and some of his favorite folks to record with were located back in Philly. So he grabbed cheap airfares when they popped up and bounced back and forth across the U.S. to record his debut album, due out early next year. The result is pretty nicely aligned with the band’s jovial tagline: “California country landscapes from the seat of an overhead SEPTA train.”

Secret American found itself convened back in Philadelphia on a sunny day in early September of 2017. And so Krzywicki and his bandmates — Kevin Killen on drums; Todd Mecaughey on bass; Rory Geoghegan and Alex Baranowski on guitars, Katie Frank on keys and Tony Unander on percussion — met up at Fergie’s Pub in Center City. It’s an incredibly musician-friendly establishment, between weekly open mics, residencies from Philadelphia vets like John Train, a regular traditional Irish music session, the musicians slinging drinks from behind the bar, and more. So the seven bandmates gathered together on the tiny second floor stage of the pub for an afternoon jam out.

This is The Key Presents: Secret American.

Secret American plays Johnny Brenda’s on Saturday, September 25th. Tickets and more information on the show can be found at the XPN Concert Calendar.