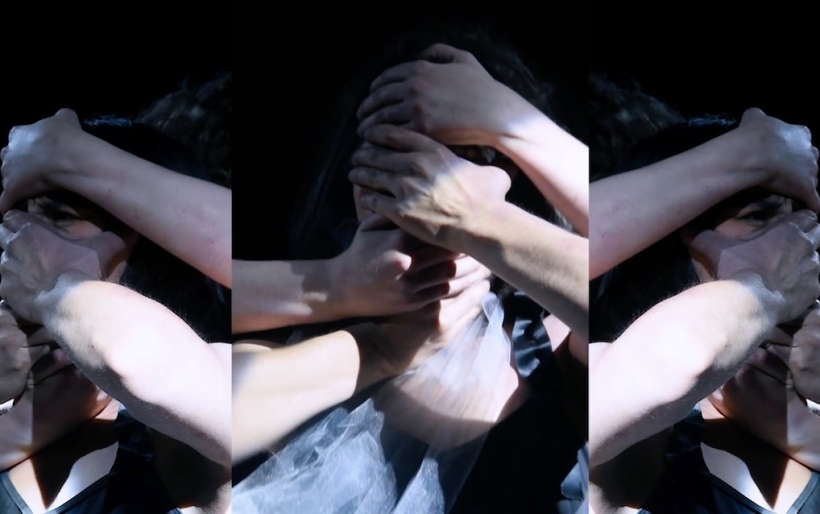 PREMIERE: Aphra navigates the complexities of grief in the new video for “Honey”

Rebecca Waychunas, the woman behind Philadelphia emotive etherial pop outfit Aphra, has had a heavy year. On the one end, she released her moving debut, Sadness is a Gesture, on west coast label Inherent Sounds back in February. On the other end, she faced a series of personal tragedies these past twelve months, including the passing of her mother, Annunziata (Nancy) Geraldine D’Orazio. “She was an internationally well known progressive house DJ in the late 80s to early 2000s,” Waychunas remembers over email. “She was a good mom.”

But the grieving process is never a straightforward thing, and Aphra’s new music video for “Honey” — a song we first heard in her Key Studio Session a year ago — navigates its tensions and complexities, its feelings of anger and resentment, as we see Waychunas performing a gripping modern dance in a dimly lit room, where two characters reach various points of personal conflict. The video was choreographed by Megan Matuzak and filmed by Ella Miller and Tim O’Donnell at Underground Arts.

As Waychunas tells us of the concept:

I initially felt guilt about depicting my mother so one dimensionally, even villainizing her to some extent. But this is a valid part of my psychological landscape. It’s a real place that needs to be acknowledged. Being angry at her, loving her, and missing her, fearing her..all those things are bouncing around inside me all of the time. I’m not interested in fetishizing my pain, that’s not my intention behind this video or making art in general.

What I’m trying to say is that, of course I love my mom, and miss her, (increasingly so) as days pass. But, there are things I need to say about what it felt like being her daughter. For being a daughter for that matter, in this time. I think the video does well at conveying how intense and disorienting some circumstances my life have been in the past. We wanted it to feel surreal, but physical; to create a real place where issues can be resolved and peace can be made. While future artistic endeavors can and probably will investigate and honor my mother and I’s similarities, it was important to continue processing the most painful aspects of our relationship in order to get to some healthy end, (though grief really doesn’t see, to end.)

Of her collaborators on the project, she adds:

I need to say that it takes a really special friendship that can handle the intensity of mourning I continue to experience. I am so grateful to have that in Megan Matuzak; someone who has continued to help support me with her artistic talents in creating amazing choreography from raw material and emotion and just an all around hilarious and motivated person as she. Ella Miller did an amazing job editing it and collaborating with both Megan on the concept its self. I just feel so grateful that I have the resources, social and physical to make things like this, and I plan to continue to do it for as long as possible.

Aphra closes out the year with two more gigs — a December 8th show with Tygerstrype, Dolores and heatmap to benefit Prevention Point Philadelphia, a Kensington-based harm reduction nonprofit looking to reduce deaths from drug overdose. More information on the benefit can be found here. She’ll also appear December 13th at the Davinci Art Alliance for an Aphra DJ set at the Garden Party: boo’yah moon art show; more information on that here. Watch the “Honey” video below.