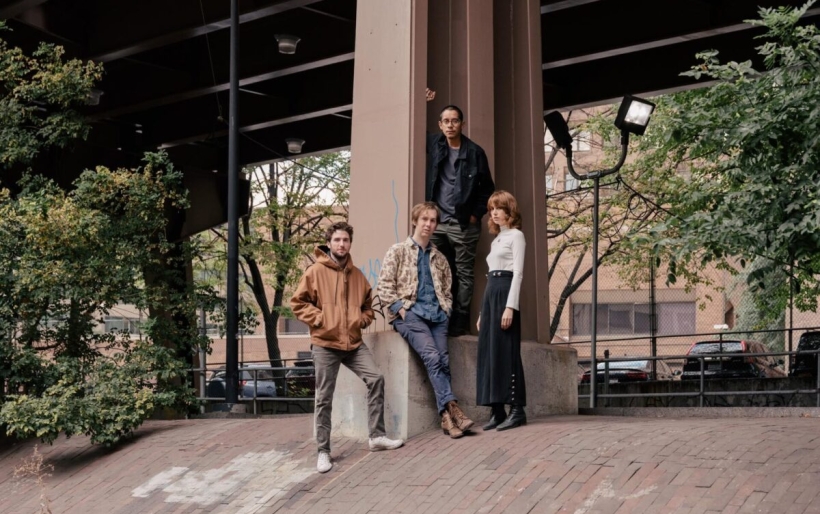 Olden Yolk | courtesy of the artist

The soft psychedelic sounds of Olden Yolk come through in full force on the first new song the band has shared in quite a few years. “Takes One To Know One” is the lead single from the group’s forthcoming self-titled LP, and at nearly eight minutes long, it’s a thorough, winding exploration of humanity through differing perspectives.

Olden Yolk is the collective new project of a group multi-talented musicians — and though they don’t all call Philly home, they’re inextricably tied to our city in one way or another. Co-songwriters and vocalists Shane Butler and Caity Shaffer both came of age in the Philly scene, guitarist Jesse DeFrancesco lives in Kensington, and XPN listeners may be familiar with Butler’s other band, psych-folk outfit Quilt.

“Takes One to Know One” moves through ups and downs, while remaining grounded in its steady rhythmic buzz. The video showcases fast-paced collage-like footage of scenes both recognizable and abstract, while the chorus repeats words of comfort and encouragement, “Have faith in dark days / They will turn around / It takes one to know one / Since you’ve been around.”

The band says of the song:

“‘Takes One to Know One’ is a play on the phrase typically meant to assign blame through commonality. Its use in the song is closer to an acceptance of our collective situation rather than a belittlement of it …The song, written during an especially jarring year of disillusionment, explores the process of finding solace in passing visages–a stranger’s smile on the subway or the beauty of haphazard graffiti on a brick-laden wall.”

Olden Yolk releases its self-titled full-length debut February 23 via Trouble In Mind Records. Stay tuned for more news from the band, including when they may be making a stop in Philly, on their Facebook page.