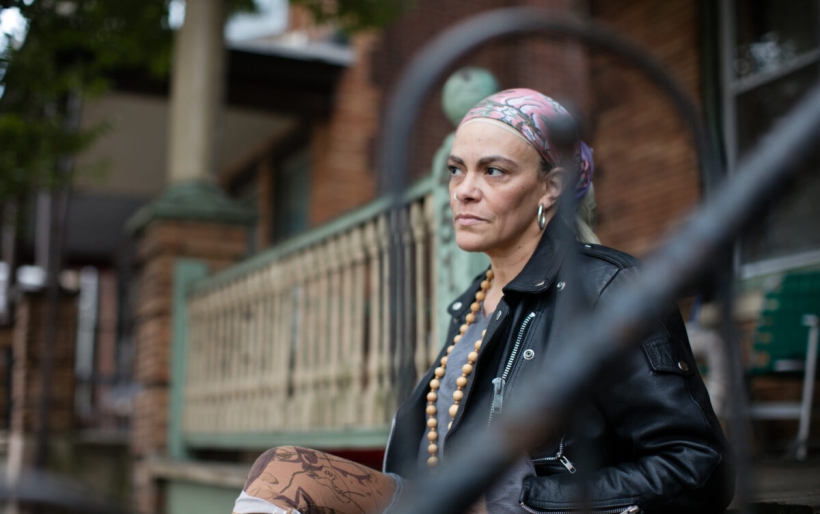 Ursula Rucker | photo by Neal Santos | courtesy of the artist

Philadelphia’s Ursula Rucker is part of America’s continuum of Afro-conscious performance poets such as Gil Scott-Heron, Wanda Robinson, Sonia Sanchez and The Last Poets. Yet, since the early 90s – her work with King Britt, Josh Wink, The Roots, a series of electronically devised solo albums – Rucker has modernized its musical form, while maintaining a uniquely seductive éclat that is hers and hers alone.

In the last several years, she has tucked into her past, and that of her family’s to come up with a lengthy performance piece My Father’s Daughter. Now, after spending the month of October performing its tales of motherhood and survival at NYC’s Club Theatre at La MaMa, the guileless poetess and atmospheric guitarist Tim Motzer have returned home to co-craft a love letter to the City of Brotherly Love’s present day changes in gentrification and beyond at the Kimmel’s SEI Innovation Studio on December 9.

Motivated by percussionist Doug Hirlinger and joined by co-composers John Swana (valve trombone) and M’Balia Singely (lyricist), the currently skeletal “Dear Philadelphia” tone poem is part of the Kimmel’s Jazz Residency program with its final, staged performance occurring next spring. So, at the very least, we know what Rucker has planned for the next six months. Though we conducted this interview via email, Rucker’s rhythms and cadences come roaring through.

The Key: You have been performing My Father’s Daughter for, what, two years now on stages throughout Philly and NYC? Has it morphed – lyrically or emotionally – since the run’s start? Is there epiphany? Is there catharsis in talking it out repeatedly – for you or your fam?

Ursula  Rucker: Yes. I premiered Father’s Daughter at Annenberg Theatre in early 2015. I’ve done it at three places in Philly, once in Pittsburgh, and just recently in NYC. Since doing a 7-show run of it at LaMaMa, it’s has definitely morphed to a higher level. My current director, Ozzie Jones…really helped me to fine tune what I already had in the script and showed me how to execute the emotion and writing with a new skill set that raised my personal performance stocks. I’m really proud of what we all did in NYC. Catharsis isn’t even the word. It strips you bare. It’s exhausting. But it’s so worth it to get to the fucking core of the very shit that means to break you…and say “Uh uh…I’m in complete charge of my own healing and joy” And then…to be able to offer my journey to others as, not only art, but a means for them to begin to heal their own shit as well? No feeling quite like it – It’s a blessing. But I worked hard as hell for that blessing.

TK: As an “epic” dramatization of a Rucker family incident or incidents, how do you think that MFD differs from what you set out to do with every poem or lyric?

UR: It’s different by the sheer nature of it. I mean I’d never written an epic poem before MFD. But, essentially, my style is my style…and it’s in everything I do. And my intention, always, with my writing…is to be authentic and uncensored. I’ve never been more authentic and uncensored as I am with MFD. And Tim’s music…well…let’s just say…that by the end of the show…most everyone is lovingly wrecked…including me and Tim. Lots of sniffling and tissues. But, thankfully, I pepper It with the right amount of Philly girl type humor…to soften the blow a lil.

TK: Are you done with MFD for a bit, ready to move away from it, and onto other things OR are you there in that head space for a while longer?

UR: I want to take it to a few more places. Not sure how long I’d be able to keep sharing that piece…but I definitely wanna test it out on the road. And I’d like to publish it eventually.

TK: Why not a book -– OR do you think that takes away from what is your highly specific cadence?

UR: The book. The book! When is it coming?! What has taken so long?! I DON’T KNOW!!! All I can say is…I believe all things happen as they should. When the time is really right – whatever that means – the books will come. I promise that to myself. And it’s been 7 years since my last solo album SHE SAID. Way. Too. Long. I’ve been slowly working on the next project. Life gets in the way. With all that said…2018 will see a new solo album project from Ursula Rucker. And I plan to dig in everybody’s ass. Oh yeah. My next jawn is gon’ be a good problem!

TK: Want to say something nice about how Tim Motzer and you fit together when you work – after what like 17, 18 years?

UR: So easy for me to say something nice about my brutha/homie Tim Motzer. We’ve changed each other’s lives. We continue to learn from each other. It never stops. And we’ve created such a next-level synergy over 18 years. It’s just magical. It’s a true thrill and joy working with Tim. He’s a musical phenom. And plus…we simply kill that shit together on stage. Period.

TK: How do you two -or you – decide on what to do NEXT – a la “Dear Philadelphia?” Do you have a list, priorities?

UR: Well…what to do next, inevitability and always, reveals itself to me. I follow the current, with a bit of dreaming and planning thrown in for good measure. I don’t do well with lists. I’m a Virgo…but I’m a messy Virgo.

TK: Who is Doug Hirlinger to you, and how did he lay out what “Dear Philadelphia” would be, WHY it would be, and how its improvisational com positional process would work?

UR: Doug is a brilliant, beautiful drummer and human who I actually met through Tim Motzer several years ago. It’s just another example of that special music/artist community thing Philly does so well and uniquely. Doug just hit me up…told me the crux of the residency…asked me if I wanted to be part of it…and I was like “Oh we biggin’ up the magic of my city…Philly?! Say no more.” I’ll always champion the specialness of my dear, beloved, exasperating Philly. I’m a Philly girl fo’life.

TK: There’s another poet/lyricist involved – how will that work between you? And how does the concept of gentrification fit in?

UR: I am a pro at collaboration. It’s one of my most favorite ways to make art. I love to see what comes out when different things and ways are mixed together. And I love M’balia. Looking forward to working with her for the first time. It’s exciting. Please. Gentrification is a thorn in my side right now. Ugh. I love a plethora of cool restaurants and shops as much as the next person…but not at the cost of the original people in the communities and neighborhoods…that are, quite often, erased and not invited to the gentrification party. I’m obsessed with the ills of this phenomenon. And since I am in the beginning throws of it in Germantown, where I live…it’s newly real. You know I’m not for the mass takeover mentality shit of gentrification. It’s on my long shit list.

TK: So, you beat me to getting one’s own mural. How proud are you of that fact? What did you think when they came to you with the idea, the tribute? And how often do you drive or walk by it just to say ‘that’s MY mural?’

UR: Hahahahaha! WHAT?!?!!! OMG!!! That mural is the highlight of my life! It was an absolute dream! I’ve gotten so much LOVE from it! It’s wonderful. I’ll miss it when “gentrification” disappears it…but I’ll always be grateful to Chip Thomas aka jetsonorama…and Philly Mural Arts…for choosing me as a subject. One of the absolute greatest things that has ever happened to me.