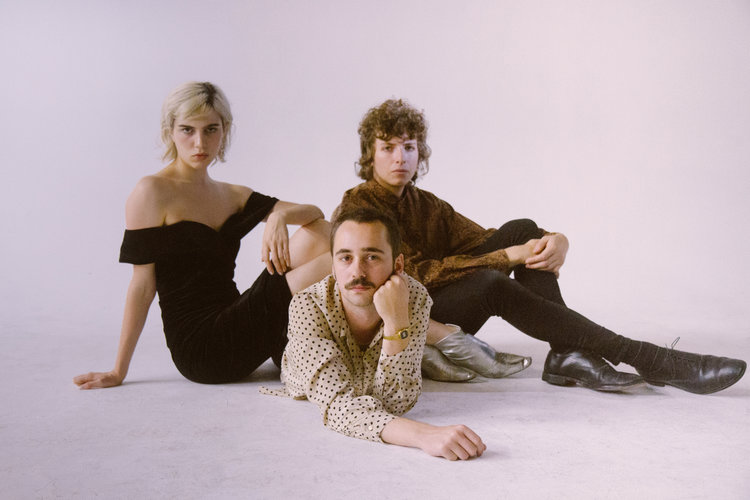 Sunflower Bean | photo by Andy DeLuca | courtesy of the artist

No Fooling: Get to know XPN’s Artist to Watch Sunflower Bean

The life of a touring musician is one that’s packed with hacks. It has to be, really. When you’re traveling by van from city to city and playing shows almost nightly, you need to find ways for the comforts of home to tag along, too. At the very least, you need to remember to bring enough clean pairs of socks and underwear.

That’s #1 on Sunflower Bean’s list of tour tricks. And at this point, they have a lot of them. After playing CMJ in 2014, the group got hooked up with a booking agent and a label and hit the road, playing shows stateside and overseas with everyone from Cage the Elephant, the Pixies and most recently, Wolf Alice.

Since that fated CMJ week, they’ve barely stopped working to catch a breath. With one EP and a full length record down, each release — scratch that, each new song — gives their sound new dimension. It’s as much a nod to the New York art rock scene in the ‘70s as it is to Rock & Roll Hall of Famers Black Sabbath, Led Zeppelin and, after last month’s single, “I Was a Fool,” Fleetwood Mac. It’s dark, fuzzy and soaked at times, and dreamy, jammy and bright at others. And it’s so, so fun to watch these songs and beautiful people come alive on stage.

Read our interview with Sunflower Bean below.

The Key: What would you consider one of your biggest accomplishments since the 2016 release of Human Ceremony?

Jacob Faber: It can be hard to nail down the biggest accomplishments because it’s been such a gradual build, but there are some moments where I’ve been able to stop and kinda take a look at we’ve done — one of those being when we opened for Wolf Alice in London at Alexandra Palace this past month. Playing to 10,000 people in such a historic venue is pretty cool!

TK: What was that like, touring with Wolf Alice?

Julia Cumming: It felt like we were playing with The Rolling Stones or something. Wolf Alice does a really amazing job of creating an exciting and beautiful show for everyone and it was a joy to play with them every night. They were doing a thing where they would pick a teenage girl off Twitter, who had never played guitar in front of anyone before, and bring her up for “Moaning Lisa Smile.” To see them do that at Alexandra Palace, and give the stage to a young girl and support her like that, it just broke me. I cried.

TK: What are some tour hacks that every band should know?

JC: Bring every pair of socks and every pair of underwear you own. Even if you think you’re gonna have time to do laundry, you might not. Also, cut up a lemon and put it in a water bottle. Drink one of those a day and it’ll keep the Tour Sick at bay.

TK: Photographer Andy DeLuca directed your latest video for “I Was a Fool.” What’s it like working with him?

Nick Kivlen: Andy is my favorite photographer of all time, not only aesthetically but also to work with. He just has such a great vibe behind the camera, it makes you feel comfortable to be yourself, or to even be more than yourself and do you things you’d usually be shy to do.

TK: You also enlisted the help of fans and friends for the video. What’s the most rewarding thing about working alongside your fans?

NK: I feel a lot of connection to our core of young fans in New York City because we were them just five years ago. It’s really nice to get to know some of them and see familiar faces. I actually run into them all the time at other shows, too.

TK: Now that you’re back home, and you played your sold-out homecoming show, what does your ideal day off look like — and how ready are you to take it?

JC: I’m kind of obsessed with work, but probably cooking, watching some bad TV and catching up with friends over coffee. My favorite thing in the world to do is walk around New York City with my headphones on when the weather isn’t too bad.

TK: You’ve played a ton of venues in Philly over the years, Kung Fu Necktie, Boot & Saddle, the Foundry and next month, Everybody Hits. What’s your favorite thing about Philly crowds?

JF: Philly crowds are always so welcoming and down to jump around. Our manager’s big Italian family lives right outside of Philly in Cherry Hill. They always come to our Philly shows which makes it an especially fun night.

TK: What are some of your favorite vintage shops in Philly?

JC: Hm, what are the best vintage shops? Hit us up on Twitter (@Sunflower_Bean) and give us some recommendations before our show at Everybody Hits on January 26th!

Sunflower Bean is WXPN’s Artist to Watch for the month of December. See them play an all-ages show at Everybody Hits on January 26th; more information can be found at the XPN Concert Calendar. For more, read our October 2016 interview with the band.