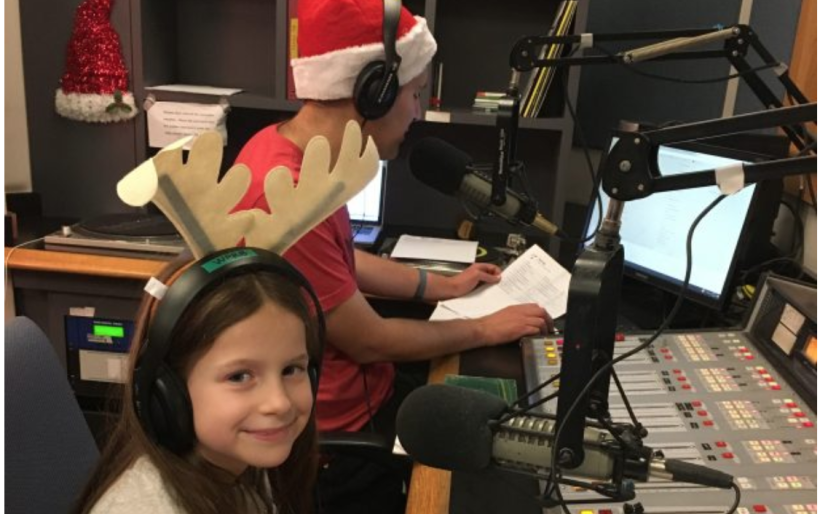 Catching up with Jon Solomon of WPRB, Philly’s (other) Christmas marathon DJ

By Yoni Kroll
December 16, 2017
10:12 AM
Share
Jon Solomon on the air on WPRB with his daughter Maggie | courtesy of Jon Solomon

Every year, while all of you who celebrate Christmas are at home with your family and friends – and those of you who don’t celebrate are getting Chinese food and going to the movies – Jon Solomon is hanging out deep in the basement of a building on Princeton’s campus, blasting out holiday tunes over the airwaves of WPRB 103.3FM for 25 straight hours.

For many people, Jon Solomon 25-Hour Holiday Radio Show on WPRB is just as much part of their holiday tradition as decorating the tree or exchanging gifts… or Chinese food and the latest blockbuster film. It begins at 5 p.m. on December 24th and runs through 6 p.m. on December 25th. For fans of DJ Robert Drake’s The Night Before on WXPN, overlap isn’t too extensive — Drake is on hour 17 of 25 when Solomon begins his shift, and it’s easy (and fun) to bounce between the two.

For Solomon, his playlist is not (just) the Christmas music of your youth. While he does end up playing a lot of traditionals, or at least covers of them, he’s constantly on the hunt for songs he hasn’t heard before. Sometimes that’s an actual new track and sometimes it’s one from years ago that just hadn’t popped up before. There are also short stories about the holidays recorded by both strangers and friends, including some pretty well-known names that speak to the fact that Jon has been a highly-regarded DJ on a highly-regarded college radio station for a very long time.

We caught up with Jon two weeks before this year’s marathon — his 29th — to talk about being on the radio for three decades (he started at WPRB as a teenager), his love of Christmas music despite his Jewish background, and his upcoming holiday-themed DJ night at Johnny Brenda’s, which happens tonight from 10 p.m. to 2 a.m. Find out more about Jon and the marathon over on his website.

The Key:You’ve been doing this for 29 years now. That’s longer than any of the WPRB student DJs have been alive. Obviously you never expected it to get to this point. That’s a given with these things. But here we are and it’s going strong. Stronger than ever, really. What do you get out of it now that you might not have gotten out of it say a decade ago, much less two? What are you looking forward to about this year’s marathon?

Jon Solomon: There are people I’ve heard from who grew up listening to the show with their parents and now they listen with their own children. That’s completely bonkers! I still find the idea of the marathon thrilling and challenging. Wouldn’t do it if I didn’t. I spend a lot of time thinking about it beyond December.

The interactivity with the audience via phone, email, Facebook, Twitter and beyond keeps me on my toes – especially during the more difficult-to-traverse middle third of the show – the focus of which has changed significantly since the program’s popularity increased overseas.

I was getting in the car today and thinking about how excited I already am for my daughter to show up at the end of the marathon and for us to talk on-air for the 10th straight show. She’s going to be 10 in June and that’s just five years younger than I was during the first marathon.

I’m looking forward to debuting a number of pieces on the show, including mini-episodes of some of my favorite podcasts recorded exclusively for the marathon. The best songs people record for the marathon usually arrive under the wire so some of my top tracks for 2017 possibly haven’t even been recorded yet!

TK: Can you explain what it is you love about Christmas music? I ask because, like me, you’re Jewish and you weren’t raised celebrating the holiday. While obviously you don’t have to be Christian to celebrate Christmas – or write fantastic songs about it! i.e. Irving Berlin and Mel Tormé, among so many others – it is not a secular holiday. What is the appeal of the music to you? What do you think the appeal is to your listening audience?

JS: I honestly don’t know! It appeals to me in part because it is tied to the best sentiments of the season – which are pretty good concepts even if you take religion out of the equation. I think different listeners take different things from the show – favorite requests or segments each year that have become traditions within a larger tradition. One couple reminds me they got engaged during the show and called to have me make an announcement on-air. The most listened-to portion of the show annually (based on the streaming numbers) is around 10 am to noon on Christmas day when I play Lindstrom’s epic 40:00+ “Little Drummer Boy” and “Snaildartha.” On paper neither of those should work (which you could say about a fair number of my favorites), yet for a fair number of people it wouldn’t be Christmas (or the marathon) without them!

TK: What do you look for while searching for songs to play? Can you map out the perfect archetypal Christmas song?

JS: It has to impact me on some level – be it as a great song, something completely unique or impossibly out there. I’ve listened to so many covers of the same 10-15 songs that one is really going to have to be special to stand out. Thankfully, there are still exciting tracks and archival finds appearing each year.

However, I’m still waiting for someone to combine The Ramones, The Misfits and The Fall into a single Christmas song that gets played in the marathon’s All-Ramones, All-Misfits and All-Fall sets.

The perfect song? Hmmm. Probably a seven minute original about an under-appreciated aspect of the holidays by a band I love.

TK: Finally, a quick question about the event at Johnny Brenda’s: how did it come about? Have you done a ‘live’ version of the marathon before? What are you bringing with you?

JS: Johnny Brenda’s was nice enough to ask and I thought it was a great idea, though their original idea of my DJing the night of the 23rd would likely have ended in on-air mid-marathon calamity. I’ve done Xmas sets a few places – the Please Touch Museum had me play holiday funk and soul at an event the year before last – but nothing like this previously.

25 hours is a decent stretch of time, yet it isn’t long enough to do everything I want in a single marathon so things like this (and the ALL-HANUKKAH SHOW I added five years ago on WPRB which will air on 12/20 from 5-8 pm ET) help extend and expand the program beyond December 24 and 25. I’ll likely just bring my laptop and a playlist mixing new finds with old favorites and listener requests – not unlike what you hear on the radio just with zero mic breaks.

XMas Enducation Hour by Jon Solomon takes place at Johnny Brenda’s tonight from 10 p.m. to 2 a.m. Get details at the venue’s website, or via the flyer below.