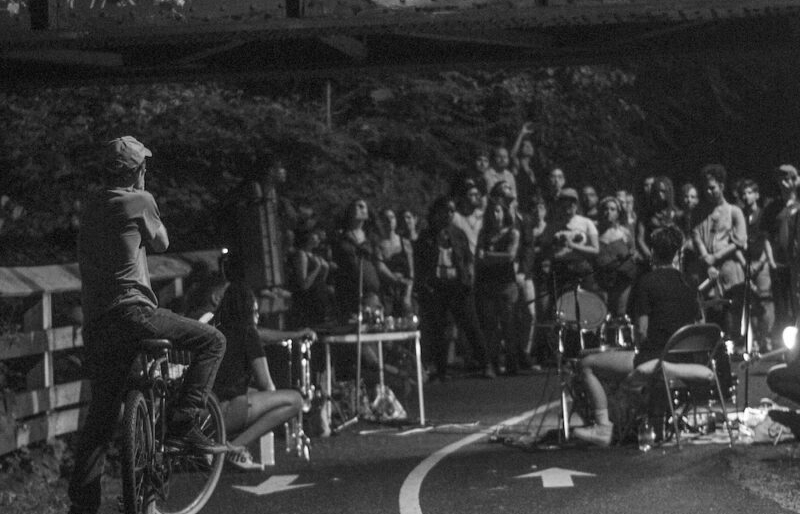 Under the Greys Ferry Bridge | photo by Koof Ibi Umoren

Year-End Mania is the Key’s annual survey of the things below the surface that made 2017 incredible. Today, Key photographer Koof Ibi Umoren (who plays trumpet with West Philadelphia Orchestra, Little Strike and a host of others) shares Philly’s best non-traditional venues to perform at in 2017.

Traditional music venues need musicians and beer in order to successful. This year has proven that musicians need beer, but not necessarily the traditional music venues. A musician can spend a lot of time performing in Philadelphia without setting foot on a traditional stage. If you’re smart and you chose an acoustic instrument in elementary school, and didn’t give it up for a cooler electronic instrument in college, then the world is literally your stage This year I’ve had the pleasure of playing and attending shows at some very interesting Philadelphia “venues,” and here’s a recap of some of my favorites. 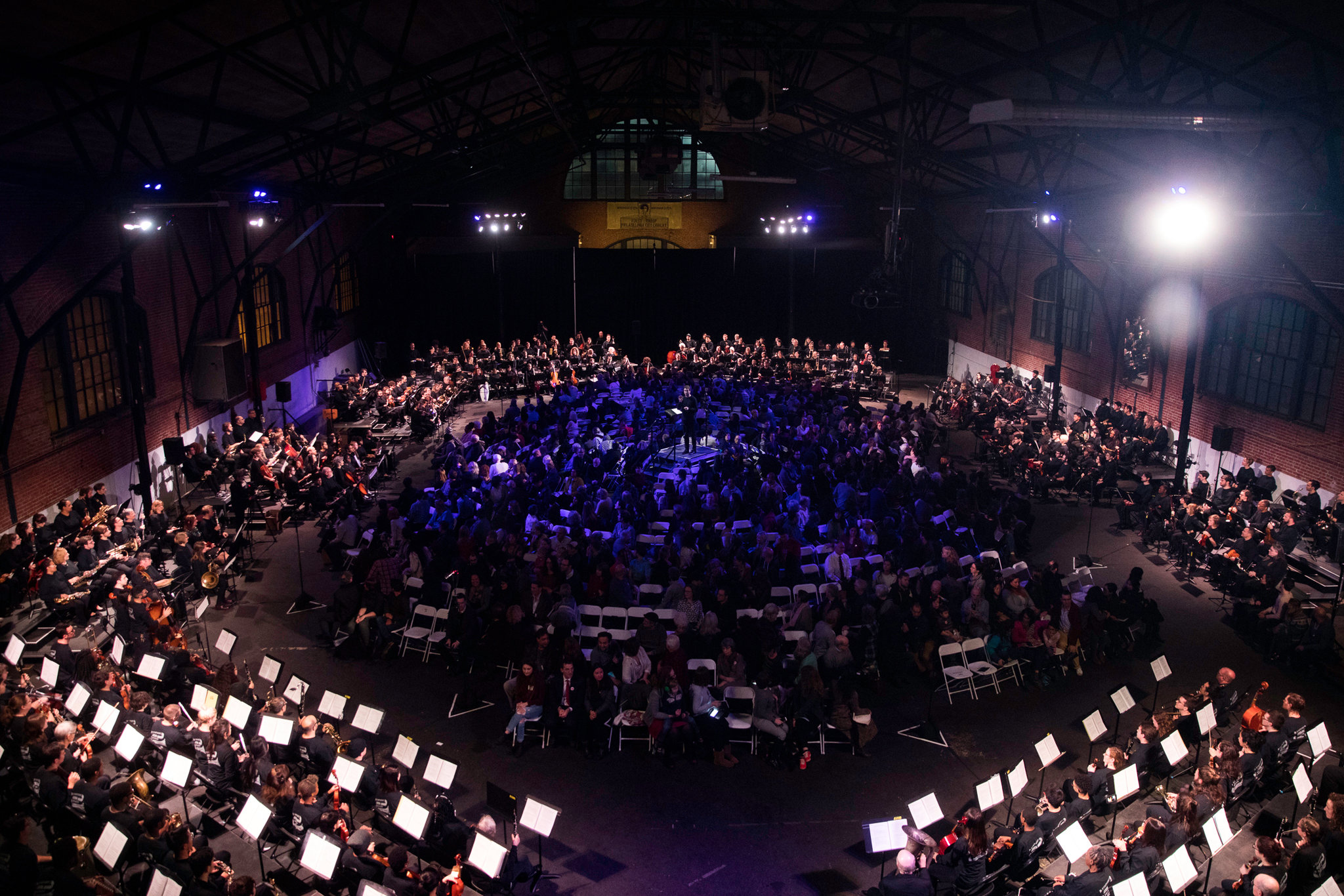 Wander the city enough and you’re bound to happen upon the relics of Philadelphia’s military history. On 23rd street, just south or Market street, stands a building that sticks out amidst the city’s glass skyline and continual new construction. The First Troop City Cavalry houses the oldest cavalry unit in service in the U.S. In my earlier years in the city I would see the facade, notice the turrets, and assume that there would be no reason for me to ever enter this fortress.

Flash forward to 2017, as part of the Symphony for a Broken Orchestra, me and around 400 musicians of all ages filed into the armory to perform and brand new composition by David Lang. The orchestra set up in a circle around the perimeter of the main gallery, leaving room for the armored vehicles outside of the circle and the audience seated inside the circle facing out towards the musicians. The goal of the performance was the highlight and help remedy the fact that the Philadelphia School District had over one thousand broken instruments collecting dust in closets.

The high ceiling and brick walls of the armory allowed each instrument to echo throughout the hall, and when all 400 musicians played their broken instruments to the best of their ability, it created a haunting hymn for these battle-wounded instruments that have served valiantly in some harsh environments only to be fixed up and sent back out to the field. The armory also does weddings.

My interest in music was sparked in school but began to mature through after-school music programs. That’s one of the reason I’m such a big fan of Girls Rock Philly, a musical non-profit helping to build an intergenerational community of girls, women, and trans and gender non-conforming people.

Since 2006, I had been following Girls Rock Philly via social media and watching the growth and development of their program, but this year I finally got an invitation to see first hand what a GRP summer camp was like. I arrived at El Centro de Estudiantes in Kensington with Tamar Dart, singer, songwriter, producer, and bandleader of Littlestrike, to perform a lunchtime set for the campers. We entered one of the schools classroom/lunchroom turned practice room/performance venues, which would be the same ‘stage’ held by Tank and the Bangas, a New Orleanian band and NPR’s Tiny Desk Contest winner. The room was filled with smiles and positive energy, as student musicians make some of the most attentive and enthusiastic audience members. If you’re in West Philly in the summer, looking to play some music outside somewhere other than the dog bowl or LARP field, you may want to look into Porchfest. A DIY music festival brought to this city by way of Owen Lyman-Schmidt of Driftwood Soldier puts bands in direct contact with their neighbors. People volunteer their porches to host bands throughout University City and Baltimore Avenue for a day of performances that are somewhere between cozy house shows and gritty street performances.

On the day of Porchfest I arrived at my ‘venue,’ met my host and their roommates and set up with my band Wookiedelphia.  We were expecting to perform for the few friends we’d invited, and a small group of nerds that were interested in seeing a Star Wars-themed brass band. I was surprised that, by the end of our second song, the sidewalk was packed with neighbors, kids, dogs, and a few pretty decent cosplay outfits. By the end of the show, we had a crowd dancing on both sides of the street and two impromptu audience lightsaber duels. Under the Greys Ferry Bridge | photo by Koof Ibi Umoren

In Philly, when a friend invites you to a show with two random bands at midnight under a bridge, make sure you go! I’ve biked and walked the Grays Ferry Crescent Trail, awaiting the day that it finally connects with the Schuykill Trail. I’ve even spent a few nights skating at the skate park located directly under the Grays Ferry Bridge. Little did I know that on special occasions, a few motivated artists and organizers throw awesome DIY, guerrilla music events under the dim trail lights.

On one summer night, I skeptically left home on my bike around 11:30. When I caught up to a frightened group of people biking across “Grays Scary Bridge,” I knew I was getting close. I arrived to a mound of bikes all locked together and many familiar faces. The previously unnamed bands ended up being Philadelphia based performance collective, SWARM, and Providence, Rhode Island’s punk brass band, the What Cheer? Brigade, both of which are great friends of one of my main musical projects, The West Philadelphia Orchestra. Shielded from the lights of the city, the show felt more like a music festival in the woods, with both bands performing as freely and expressively as I’ve ever seen them. Bartrams Garden: 45-acres of Stage! Highlights: Bartram’s Mile, the view of the skyline, and fishing! Double Decker Music Series: An intimate mobile concert series hosted by Sebastian Petsu and Bowerbird provides a guided tour and a new view of Philadelphia with a live music soundtrack from the top of a double decker Rigby Mansion: I’m sure there’s history in the Rigby Mansion, but more importantly, they host performances both inside this historic Germantown house, and outside in their open yard. Germantown Kitchen Garden: The Golden Hour concert series hosted musicians every second Sunday this spring and summer on their half acre farm and nursery in the Germantown and also introduced me to my new favorite local cidery, Young American Hard Cider.