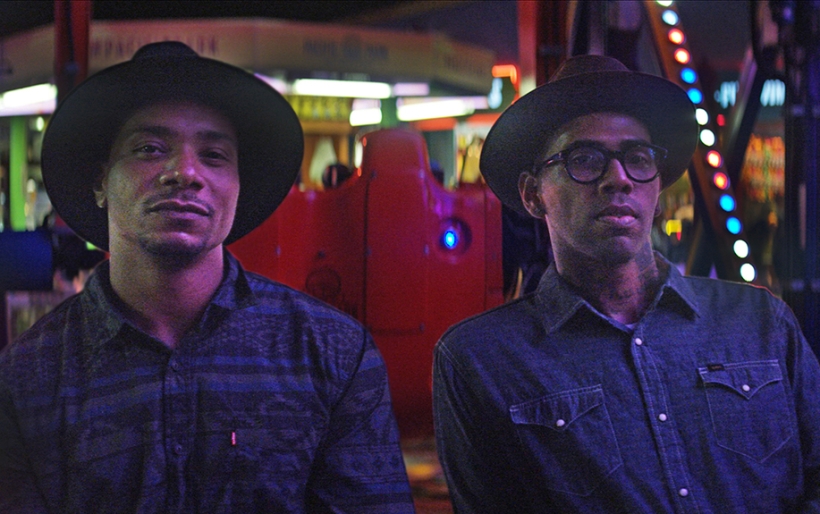 This past Friday, rapper STS (aks Sugar Tongue Slim) and singer / producer Khari Mateen released their new duo album, Better on a Sunday, and it is an easy listen. The beats are mellow and laid back, the content is relatable. It honestly has a song for everyone – your little brother, your mom, your best friend, your girl, your girl’s friends, and your own various personalities.

The album kicks off with the title track, “Better on a Sunday.” The song is a moody one: an every-person’s anthem detailing how we all manage to make it through the week while balancing ever-changing moods, money woes, a social life and work flows. The Atlanta born rapper, STS spits about how he is tired of wasting his life just to collect a little coin a some menial job. Although the song in itself is solid, I found it odd to have such a contemplative and sobering song at the genesis of the an album. I believe it may have done better to be included later in the track listing. (It does have a beautiful music video, though.)

Next we’re on to “Fake News (Make Love Great Again),” another standout track. “I’m trying to make love great again. / Instead you listening to all your friends / and they don’t want to see us win. / Time and time again / they reporting on fake news.” The preceding is the opening hook sung by Mateen over a twang blues style beat. Throughout the song, STS raps about how the friends of his current girlfriend spread lies and fake news about him and his relationship. The song is playfully references various Trump-isms in relation to STS’s relationship woes.

“Happy Birthday Mama” is a soulfully sweet track, and to be frank the world has been overdue for a new ode-to-mama song. And true to form, this song details all of the struggles and uphill battles that mothers go through in order to raise a kid. After making a few mistakes as a youngster, STS believes is mom deserves Louis Vuitton purse and a pink cadillac. I find one of the most interesting parts of this song is when STS mentions that he struggled to relate to Marshall (Eminem) regarding his attitudes towards his mother – for STS, his mother was all that he had.

Another notable song on Better on a Sunday is “Bad MF,” where STS and Mateen fawn over a beautiful young woman. This song, like many others on the album, is a smooth as butter. The melody is jazzy and laid back and the gracious praise of a well-rounded babe gives the track a joyous and jovial feel. Despite being an overall good natured song, Mateen offers a little bit of spice in hook where he croons “You’re a bad motherfucker, I want to tell your mom and dad thank you / She said she got it from her mama, man them jeans look good on you / I know you drove your daddy crazy trying to raise a pretty girl like you.”

“Little Bar” has a downhome country sound to it that reminds you of a drinking montage in your favorite college movie. The twangy guitar, paired with a nod to the Philly original Citywide Special, helps the song have more of an urban anchor.

Overall, Better on a Sunday is a well-executed feel-good album that has a little something for everybody. I feel safe saying that most people will be able to easily identify their favorite song. STS and Mateen have an almost preternatural affinity for creating to 40 worthy tracks when they team up and I would love to see this album make it to that level.