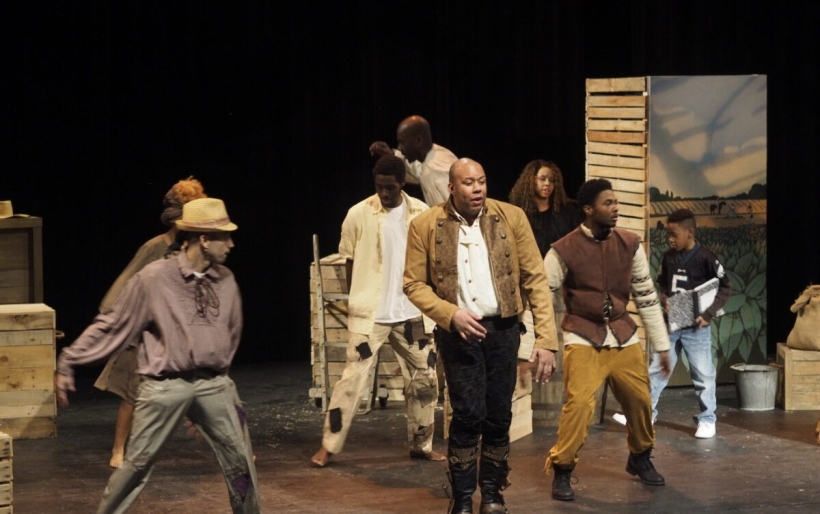 The occasional mouthpiece for The Roots heads into his second theater piece Henry Box Brown: a Hip Hop Musical for Black History Month

Forever connected to The Roots, Karl Jenkins – aka Dice Raw – has struck out on his own in a big way within the last five years. Starting with his most politicized solo album yet, Jimmy’s Back, and his self-penned accompanying theater piece, The Last Jimmy (both dealing with Jim Crow laws, the unfairness of black-male incarceration and present-day forms of enslavement), Jenkins has further ensconced himself within the world of theater with Henry Box Brown: a Hip Hop Musical.

Running at Community College of Philadelphia’s Bonnell Auditorium, the musical he stars in and has co-written is about the legendary Virginia-based slave who — upon losing his wife — mailed himself in a 3′ x 2’8″ x 2′ box to Philadelphia and subsequent freedom. From there, “Box” Brown became prominent for his writing and his on-stage antics as a hypnotist, magician and singer.

The Key: The last time we chatted was exactly this time two years ago right after the 2016 Grammy’s when Kendrick Lamar’s on-air performance had him shackled in chains, with actors, musicians and dancers in prison jumpsuits behind gilded bars. The piece transitioned into a choreographed African dance with a large silhouette of Africa as a backdrop. Which was weird, because that’s what your touring version of The Last Jimmy had as its staging in Los Angeles mere months before that.

Dice Raw: (laughs) Know what the interesting about that? We heard he was planning an intimate theater tour at that same but he cancelled it. Weird, right?

TK: Not to make a thing of it, but did you ever hear from Lamar or his people? At the time, it was a big deal.

DR: Slightly. They reached out to me, apologizing for the media problem behind what may have occurred. I told them that if he wanted to apologize to me for anything he could just call me. If Lamar would have told me that he didn’t steal my idea, I would have believed him. What reason would I have to think that a man would just lie to me?

TK: So you wake up the other morning and someone calls you to say a pipe burst at New Freedom Theatre where Box Brown was supposed to run. NOW WHAT?

DR: Oh my God, A.D. First off I start the morning shaving my head while I’m in the shower and I cut my head. There’s blood everywhere. So bad. Wouldn’t stop. It was like someone shot me. Then I look down an see the phone ringing and it’s the Freedom Theatre. “Bad news. Pipes burst.” Now I should say that at that same time I am on my way to Miami to perform in The Last Jimmy there. I’m already nervous because i have no idea how the Miami show is gonna turn out when I hear this. I couldn’t enjoy selling out The Last Jimmy because I knew I had all these problems in Philly to face when I got home. That was a huge issue.

TK: How did you get a new venue together so fast?

DR: A lot of theaters were willing to open their doors to us – even though they may not have been so previously – but Community College moved fastest and was most accommodating. TK: So you are touring The Last Jimmy almost at the same time you are doing the Henry Box Brown show. You are not a trained actor but here you are pretty much handling two roles almost at one time. Do you feel more of an actor and playwright than a rapper at his point? Are you just working from instinct?

TK: What have you gleaned about touring The Last Jimmy beyond Philly? Not that you don’t have national presence as a rapper, but in your hometown, audiences are coming for you AND your views on enslavement and incarceration. In other cities it is more about the story than your celebrity.

DR: Other cities have loved it and I have been humbled quite frankly by selling out shows in Miami and Los Angeles – some for just teens, some which filled up our talk back sessions because people wish to discuss the topic of black mass incarceration. The longer I do this the more legitimate it becomes or I become. And that is weird to me.

TK: As you’re doing this more-and-more — do you feel yourself becoming a better actor? Are you a good Henry Box Brown?

DR: I do. I also find myself enjoying it more. I used to be plagued with uncertainty. Now I can’t wait to get out of stage and actually do this play.

TK: So why this musical? Why Box Brown? When did you start hearing and seeing the Henry Box Brown show in your head?

DR: I was having so much fun doing Jimmy I began thinking about doing another show. I started reading the words of Brown and his full narratives online – how he mailed himself to Philadelphia as his only way out of being a slave. That intrigued me. I was blown away by the man that he was – the horrific tale of his life – of losing his family twice: once as s child and once as an adult. Then…how when he was free he brought his show on the road and made a name for himself there as an entertainer.

TK: What song or moment is most pivotal within the musical’s through-line?

DR: Along with the song “Autumn Leaves,” which is a metaphor for when slave masters came and stole children away from the mothers and sold them…. you don’t want to miss the interaction between Henry and his wife and when she gets taken away by the slave masters. This is where he begins contemplating his escape. There he is showing that he has love in his life and that he is lost and that he must be found – that he must be remembered. Because African-Americans who were enslaved were more than just just slaves. They were doctors and singers, inventors, magicians, healers. There was so much culture lost inside of what happened during that horrible moment in America — and there was so much amazing stuff that forth from that moment. That was what I wanted to showcase with Henry. He made a life for himself as was an entertainer and a performance artist – a tobacconist and a poet and a hypnotist. He took care of his family at all costs. When he loses his wife and realizes that he is done with slavery — yeah, that is pivotal. He wanted to create a new life for himself and did it.

TK: So is the Dice Raw who has created songs — short form musical moments — gone only to be replaced by a musical playwright for good?

DR: No, he’s here. Dice Raw is never gone. I have a project to be released in March or April — depends on how long Box Brown plays and if additional dates are needed. It is an album and a book called The Narrative: Please Read Me. It looks at modes of black expression over the last 30 years. I can’t wait for you to hear it, A.D.. It is the best thing I have ever done. Henry Box Brown: A Hip-Hop Musical runs through February 17th at the Community College of Philadelphia. Tickets and more information can be found here.