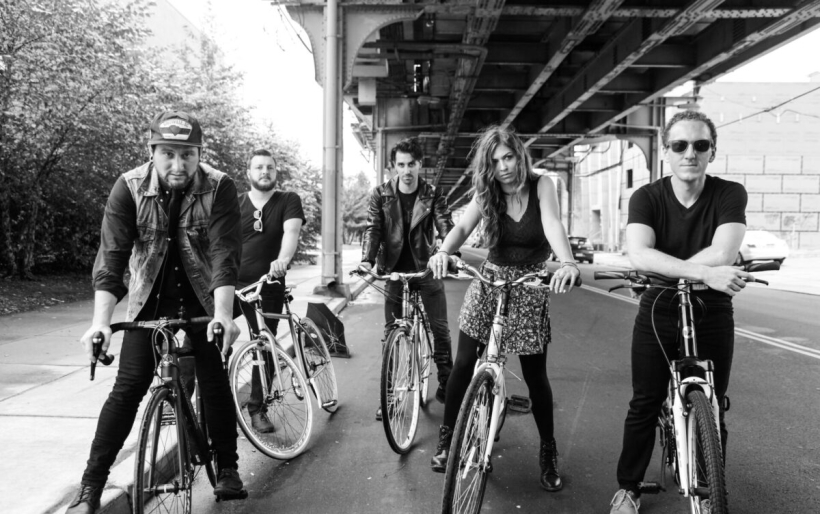 goodnight/goodluck | photo by Stephen Dyer | courtesy of the artist

Philly modern rock five piece goodnight/goodluck is releasing its debut EP missing this spring. Though the five bandmates are longtime friends who have played music together since they were kids, this is their first proper release — and based on what we’ve heard, it’s an anthemic, riff-heavy feast for the ears that’s solidly steeped in the crossover between underground emo and mainstream rock. When their demo surfaced online last year, I noted its heavy Get Up Kids / Rainer Maria vibes, and asked y’all to give them a hi-five next time you see them.

As of right now, that next time is May 12th at Boot & Saddle, where the band celebrates the release of missing with Secret American and Wax Wav. Today, they give a teaser of the experience with the new music video for “Ice Cream & Red Wine,” which is mostly comprised of a single black & white shot filmed along Salmon and Seltzer streets in Fishtown (which, speaking of odd culinary pairings, salmon seltzer, people. Crazy.) As the bandmates play their instruments in the street and along the sidewalk, singer and lyricist Sarah Puleo makes an exit from Kitty’s Luncheonette, and they march along the Olde Richmond freight line until popping through a wormhole of sorts, appearing in a field in living color.

The video was shot by local multimedia artist Steve Rivera — with help from various Philly friends like Ang Bocca on makeup and Delicious Boutique on wardrobe — and the band’s Eric Zrinsky tells us that the biggest thing they learned from the experience was that simplicity is sometimes the best option.

We knew we wanted to do something Philly-centric and something that was at least a little bit gritty. Our initial idea had  3 or 4 different locations, drone photography, a Liberace volume of costume changes, projections—a lot of stuff. We had two days to get this thing done so we needed to scale back. Steve was great about recognizing what we could do and still have it look good. Can’t imagine how much patience it took for him to nail down these single-shot takes while dealing with our amateur bullshit.

Check out the video below. Fun fact; the song emerged as a result of the band’s Ed Taylor and Alex Brown jamming the drum and bass parts to “Runaround Sue” in practice, with Jayson Verdibello and Zrinsky jumping in on guitar and synth. By the end of practice, Puleo had written the vocal melody and lyrics.

The missing EP was recorded at Headroom Studios by Joe Reinhart, and is available on May 12th; get a pre-order here, and get tickets and more information on the Boot and Saddle show here.