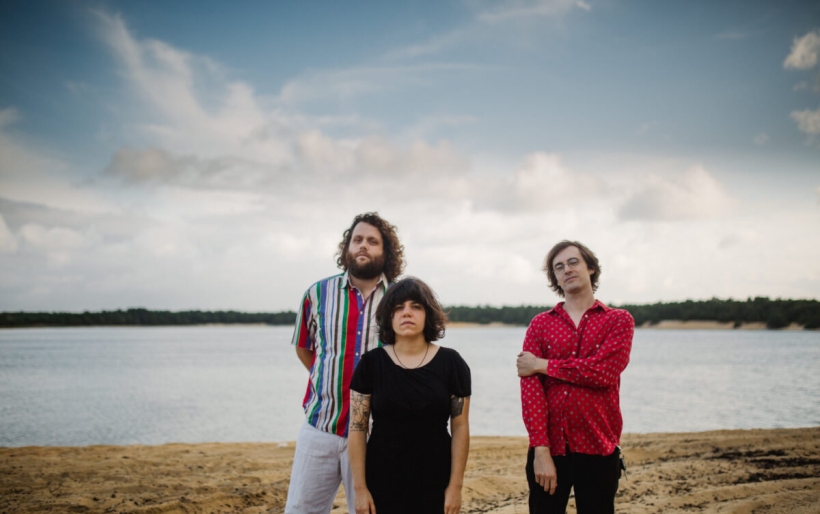 Screaming Females | photo by Grace Winter | courtesy of the artist

Sewing, Screen Printing and Visual Style: The side hustles of Screaming Females

Local sweethearts and rockers extraordinaire Screaming Females released their seventh album All At Once on Don Giovanni Records last weekend. If you haven’t given it a spin yet, you really should. The double LP – 15 tracks on one record and demos and an AV Club session on the other – is both impressive in scope and incredibly hard hitting and catchy. So catchy. This is nothing out of the ordinary for the long-standing band, which started in New Brunswick back in 2005, but it’s still very exciting.

That’s actually a bit of a lie: this album is so good and so sonically expansive that it very much is rather extraordinary and to claim otherwise wouldn’t be fair to anyone. Just listen to that first track, “Glass House”, and revel in Marissa Paternoster’s heady guitar licks and her soaring vocals that reach out and match the music in intensity.

What puts All At Once a cut above – outside of the fact that Paternoster and her bandmates “King” Mike Abbate (bass) and Jarrett Dougherty (drums) are absolute wizards – is the pop undercurrent that fuels the album, something that makes the whole thing have this unshakable feeling of friendly familiarity. If you needed any more proof of their love and appreciation of pop music, check out the two covers included on the release. A band covering Sheryl Crow and Taylor Swift sounds like something that should be relegated to a bad bar night but somehow Screaming Females take these songs and turn them into something that is just as exuberant and heartfelt as any of the other tracks on the album.

With one foot planted firmly in the DIY basement scene that birthed and still very much sustains them, Screaming Females are going places. Not only did they put out this expansive double LP to national acclaim but they hit the road last Friday and will be gone for close to two months, touring with bands including Radiator Hospital and HIRS from Philly and Thou from New Orleans.

But a band can’t tour all year round and your chances of making a living off of playing music have dwindled precariously over the past three decades, if that ever really was much of an option. Many musicians work in food service and other gig economy jobs. They’re your baristas and bartenders, waiters and line cooks; jobs that lend themselves more easily to taking off for weeks or even months at a time to tour.

We recently caught up with Screaming Females to discuss what they do when they’re not on tour. They’ve all had those jobs in the past – drummer Dougherty still takes occasional barista shifts at the same West Philly coffee shop where he’s been working for years – but as the band enters their second decade of existence, they’ve each managed to carve out a more long-term, and more unique, source of income.

Paternoster is an accomplished and in-demand artist. Abbate runs a t-shirt screening business and a record label with his partner Tracy Robinson in Elizabeth, NJ, where they live. And Dougherty makes button-down dress shirts. Like, for real, start-to-finish fabric and sewing machine button-down shirts. He told The Key that, “I’ve always been interested in the idea that if you enjoy something, you feel good at it, you feel somewhat fulfilled by it, that you just keep on going down that path until you figure out [a way] that somebody will occasionally pay you money to do this thing. It’s kind of worked out okay for me in life to go that path. Although it doesn’t make me a lot of money, so far I haven’t starved to death.”

When it comes down to it, that’s all you can really ask for. Before he settled on making clothes and selling them through an Etsy store, Dougherty was sewing bags that he’d then sell on tour. According to him, “They sold really quick, it was great.” Paternoster joked that he did well because, “It was peak tote bag era. Throw out the 50 other tote bags you have because now you only need one.”

“The shirts are something that I’ve been pretty invested in for a while,” Dougherty explained. “I’m mainly self-taught; I’ve taken a few classes here and there that have helped me but ultimately it’s just hours of sewing and trying to figure things out.”

But why go through all that when you can just buy a nice collared shirt for a fraction of what it costs to make one from scratch? According to Dougherty, “Physically creating something that is then a usable object at the end is really appealing to me. I feel like I get a lot of the same value out of putting in quarter round [moulding] successfully in my house as I do in playing drums in a lot of ways. It’s hard to draw the distinction between art and craft.”

While they go about things in different ways, Dougherty’s attitude and his urge to make one-of-a-kind shirts – or music – mirrors that of his housemate: consummate vintage t-shirt collector, artist, and musician Perry Shall, who we profiled in The Key in January.

Dougherty’s dress shirt obsession is directly tied to his love of punk rock. According to him, “I like having cool shirts to play in live at our shows because it’s something that from the moment we started playing and I started going to a lot of punk shows [I realized] I didn’t want to look like everybody else.” Much like his drumming, his shirts are oftentimes loud and always eye-catching. Asked about fashion influences, he immediately mentioned Richard Hell of the Voidoids and Joe Strummer of The Clash, especially when it came to the latter’s “really great short-sleeved cuffed collared shirts that he wore a lot where he’d cuff the sleeves.” He also cited Grant Hart of Hüsker Dü as a style icon: “You can just be like Grant Hart and say ‘Fuck it, I’ve got some crazy necklaces on and whatever and I’m going to rip this show up!’”

While Paternoster’s excellent and inventive guitar playing is the backbone of Screaming Females’ sound, she is also responsible for much of their visual style, creating album art and t-shirt designs for the band — much of which you can see at her website. She has a BFA from Rutgers University, where the band originally came together. According to her, “I thought I was going to be an illustrator and … maybe make comics or maybe make cartoons or something. I feel like that kind of quote-unquote lowbrow art is obviously very connected to punk in a great myriad of ways. So when I became interested in punk and that aesthetic I was just, like, ‘Oh, this totally makes sense.’ Visually it’s all of the things that I like.”

Paternoster has participated in a number of art shows, including one at gallery and venue Space 1026 last year, as well as designed album covers and t-shirts for bands including Waxahatchee, Shellshag, Modern Baseball, and California X. In addition to those types of jobs she told The Key that she also gets a lot of commissions from Screaming Females fans. Having her art be affordable is important to Paternoster: “I basically just charge by size and I just try to keep it really reasonable because I’d rather have people have it than not and also, like, the fact that anybody wants a piece of my art already seems kind of crazy to me. I think it’s kind of a luxury for me to be able to sit down, draw stuff for people, and have them pay me for it.”

An untitled 2014 lithograph by Screaming Females’ Marissa Paternoster | via marissapaternoster.com

That need for artistic accessibility is something that is front and center for Paternoster and the other members of the band. “I’ve tried to use [noted punk record producer] Steve Albini’s M.O., which is just not being afraid to work,” she explained. “So as long as I have something to do every day – if it’s making something for a band or making something for someone who ordered a commission – I’m not afraid to sit down and work.”

Abbate is also very, very busy. He purchased screen printing equipment on a lark a couple years ago and has since turned it into a thriving business, New Planet Screen Printing, based in his Elizabeth hometown. He also runs a label, State Champion Records, with his partner Tracy, who works as a librarian during the day. That label is home to a number of bands from New Jersey and New York including Glazer, Snakeskin, and Exmaid.

While the screen printing endeavor hasn’t been without pitfalls – he told The Key that some of the equipment he bought turned out to be broken and that he also had to deal with a crooked landlord who disappeared with his security deposit – overall he’s found the experience to be both enjoyable and rewarding. As he put it, “Learning a new technique is always fun and I really like being able to help people make their ideas come to life.”

That same DIY-inspired urge to both create and help others do the same very much serves as the philosophy behind the label, which started last year. According to Abbate, he and Robinson “always wanted to do something very hands on and unique instead of just being the people who place the order at the pressing plant or whatever other labels do.” To that end, they screen print and assemble all of label’s releases themselves with the help of “whatever friends we can bribe with dinner and beer.” Paternoster told The Key that she sees distinct similarities between what Dougherty and Abbate are doing. “[State Champion’s releases are] limited, there’s nothing else that’s going to be like this edition of this tape,” she said. “That is special in a world where we’re just drowning in garbage.”

Being able to make something unique is very important to Dougherty, especially when it is so easy to go to the store and buy something mass-produced. He explained that he sees learning to make shirts and playing in bands as comparable pastimes: “Having been part of a project that’s taken up more than a decade, you start to become more oriented to the idea of mastering something over a long period of time or investing in something that you know might not pay off tomorrow but has long-term benefits.”

While Dougherty views this type of investment as a positive, Paternoster told The Key that, “It’s also kind of overwhelming sometimes to think of wanting to succeed in this new world or be a part of this new community but then looking at yourself and being like, ‘Oh my God, I’m 31 years old and it took me this long to become this involved in music so by the time I’m this involved in art or sewing I’m going to be dead.’ I’ve got to speed this up!”

When it comes down to it, it’s clear that Screaming Females will be making music – and yes, art, collared dress shirts, and screening t-shirts and putting out records –  for years to come. Creating is something that is part of their DNA at this point. As Abbate put it: “I think that the DIY attitude goes hand-in-hand with giving a damn. Plus, if we don’t do it ourselves, who the heck is gonna do it for us?”

Screaming Females headlines Union Transfer on Thursday, April 5th with HIRS and Thou; more information on the concert can be found at the XPN Concert Calendar. All at Once is out now on Don Giovanni Records; stream the record below and purchase a copy here.