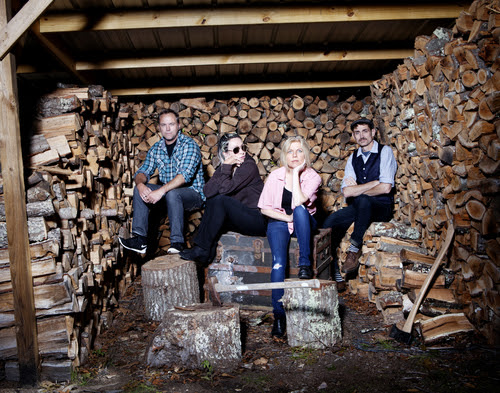 Belly | photo by Chris Gorman | courtesy of the artist

Long lost 90s faves Belly returned last month with their first new song in 23 years, the incredibly catchy “Shiny One,” and now the single has a mesmerizing new video to go along with it. The video, which features the band members decked out in bird masks and overlaid in psychedelic colorblock, is an eye-catching match for the song’s timeless and shimmery sound.

It’s also just strange enough to have us wondering about what the rest of the new Belly tunes we have coming our way will be like. Belly’s forthcoming album is called DOVE, and the new video takes the hints of bird themes to a new level. Plus, birds like shiny things, right?

Here’s what drummer Chris Gorman has to say about his inspiration for video:

“When it became clear that we were calling the album DOVE and the suggestion that we produce our own video the masks were my first and only idea. I sent a brief pitch to the band saying ‘hey guys, what if we shoot a video and we all have bird heads?’ The response was overwhelmingly affirmative. I purchased 3 more heads.”

DOVE is out May 4. Watch the “Shiny One” video below. Belly’s upcoming tour makes a stop at Union Transfer on September 28 — find tickets and more information on the XPN Concert Calendar.