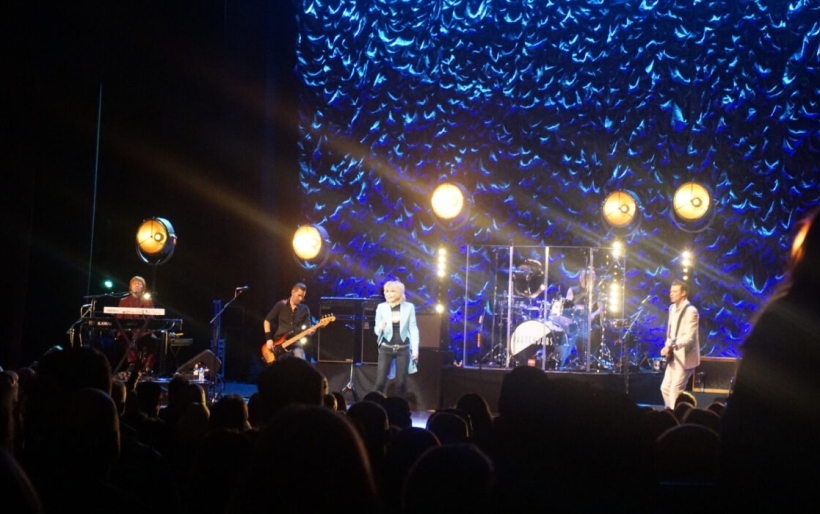 Pretenders and their fans live in the moment at the Tower

I was a little bit late to the party. I knew the hits – and enjoyed them – but 80s new wave had never been my scene, and I considered myself to be a casual Pretenders fan at best. That changed in 2016 when the band released Alone, which featured a bluesier, more garage-rock incarnation of their music. The album was produced by The Black Keys’ Dan Auerbach, which I’m sure is no coincidence. This was the Pretenders sound that really grabbed me. And then I listened to “Tattooed Love Boys.”

After eventually checking out selections from the band’s back catalog, I realized what I had been missing out on: a collection of catchy power-pop songs, all of which possess the immediately-hits-you factor — you like it the first time you hear it. The songs are even better live, sounding rawer and less over-produced than the studio versions (a common issue with 80s music). But Pretenders fans from Philadelphia got to experience those songs last night at the Tower Theater, where Chrissie Hynde and company took to the stage to deliver a fun hour and a half’s worth of earworms to dance to.

There was one weird aspect to the show, however, and that was the band’s adamance that no cellphones be visible at the concert. Security guards would repeatedly scold audience members for being on their phones like helicoptering grade school teachers, which was done, they told me, at the request of the band’s management. But it’s worse than you think – not only were you not allowed to film or take pictures, but you weren’t allowed to be on your phone at all – not even to send a text message. If caught, you’d be reprimanded, and if it happened repeatedly, you’d be escorted out of the show. (For the record, my photos you see in this piece were taken with the blessing of a photo pass.) But maybe it was worth it. The cell phone rule forced you to pay more attention to the band, which you learned to appreciate more and more as the show went on. The band’s tightness was remarkable. Chrissie Hynde sang every note perfectly on key with the precision of an X-ACTO knife and guitarist James Walbourne proved to the Tower crowd that he’s one of the more underappreciated rock guitarists in the music industry today.

The band kicked off the show with back-to-back tracks from Alone, including “Alone” and “Gotta Wait,” before giving way to 1981’s “Talk of the Town.” The main set also included a version of The Kinks “Stop Your Sobbing,” power ballad “I’ll Stand by You” and a drum solo from Martin Chambers, which gave way to 1984’s “Middle of the Road.”

The band came back onstage for a three song encore featuring “Back on the Chain Gang,” “Night in My Veins” and “Tattooed Love Boys,” and then subsequently left the stage only to come back for a second encore featuring “Brass in Pocket” and “Precious.”

The crowd skewed a bit older; it became imminently clear within the first few minutes that I might just be the only twenty-something in the audience. I made friends with a nice lady sitting in front of me (Shout out to Jackie!*) who hilariously suggested I google “Fleetwood Mac.” I might like them, she said.

But you know what? I’m not going to hold it against her. Anybody who’s a fan of the Pretenders is OK in my book. *Her name may have actually been Janet? I don’t know. It was loud.