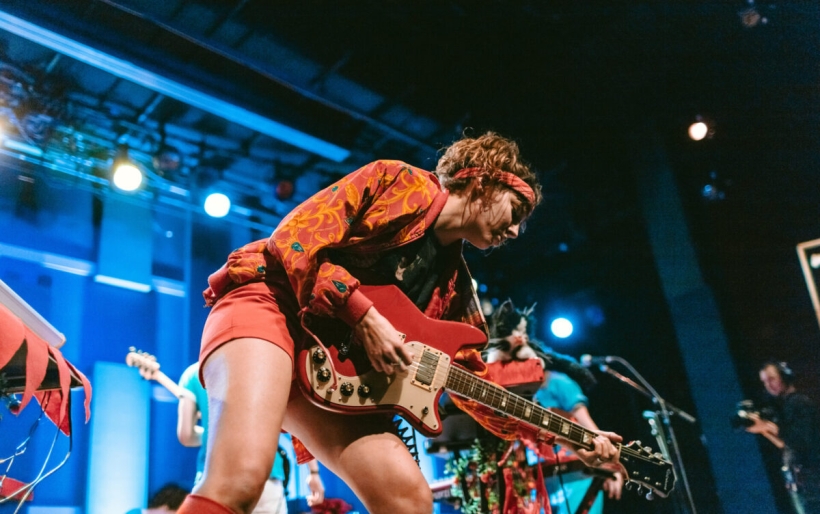 Caroline Rose has just a few favorite songs — her own songs, that is. During her Free at Noon performance today, the NYC-based songwriter enthusiastically introduced more than one of her tunes as her “favorite” — and with an enthralling performance like Rose’s, it’s hard to disagree.

Rose’s set may have been on the shorter side to allow time for the doubleheader, but she packed it full of infectious energy and her signature offbeat touches — from the fake flowers (and…vegetables?) decorating the stage to her beloved stuff cat Chelsea perched on the keyboard, which was labeled Key Bore-d. But Rose’s set was anything but boring. Rather, the band was so upbeat that you could hardly tell it was their third Philly show in 24 hours — they played Johnny Brenda’s last night and an in-store at Main Street Music before that, and somehow they have to get to their Connecticut show tonight.

Even though, as Rose observed, it was odd to be playing a show while it was “broad daylight outside,” the band effortlessly lit up the stage with new tunes from their recently-released album LONER, and their own enthusiasm quickly spread through the crowd. In the middle of the set were two of Rose’s favorites, “Soul No. 5” and “Jeannie Becomes a Mom,” and since the new record’s been out for over a month now, the audience was ready to sing along.

In between songs, Rose kept things going onstage — “I was told not to have any silence, so I just go ‘beep boop beep boop,'” she said by way of explanation. The singer also had no shortage of dance moves. Perhaps the best moment of the set, though, came during the band’s closing song “Money,” when Rose pulled out an elementary school style recorder before launching into the song’s shred-filled end.

Check out photos from the set below, along with an audio archive. 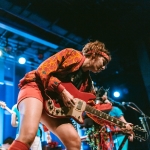 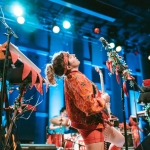