Martha My Dear: Martha Stuckey goes her own red way with Due To The Sensitive Nature at SEI Innovation Studios - WXPN | Vinyl At Heart 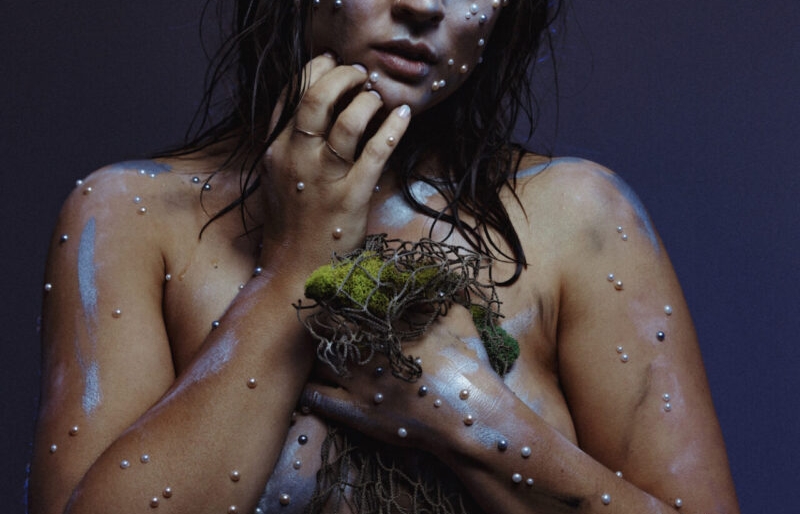 Martha Stuckey | photo by Travis Chantar | courtesy of the artist

Martha My Dear: Martha Stuckey goes her own red way with Due To The Sensitive Nature at SEI Innovation Studios

Away from her glittering and theatrically driven disco-funk-Philly outfit Red 40 & the Last Groovement, singer-actress-lyricist Martha Stuckey is no less dramatic. It’s just that the characters in Stuckey’s solo sights are more isolated and quite frankly boiled down in number to a noirish, ritualized and sexualized few. And that’s where Due To The Sensitive Nature comes in.

The performance runs from April 12 to 14 at SEI Innovation Studios, and finds Stuckey accompanied by steel guitar and gurgling 80s-ish synths, discovering a hole in her heart and her past that runs along the sweat-filled lines of a modern day James Cain or Erica Jong…an unnerving sensualist place where easy escape seems unlikely. The Key and Martha chatted about leaving homes of all sorts in the midst of a bitter chill.

The Key: What made you move from Minnesota to Philly in the first place – it couldn’t have been for our weather?

Martha Stuckey: I was actually living in Spain when I started considering Philadelphia. I was teaching English in a middle school but was sort-of unconsciously or compulsively creating opportunities for me to perform. I ended up curating a concert with a friend in this Spanish village that, I have to say, was one of the better events I’ve ever produced. Then I was absorbed into this ex-pat community of musicians who would travel around the Mediterranean shoreline singing in various restaurants and venues. Telling you this, I’m really having a hard time remembering why I ever left.

MS: Anyway, I realized that music and performance was my bag and I should follow that for a bit. Through a series of connections, I found out about the Pig Iron School for Advanced Performance Training, applied, and got in. I had never been to Philadelphia until I showed up with my luggage to move into my new house which is crazy to me… Amazing what some ignorant bravery allows us to do. Luckily, it all worked out.

TK: In one capacity or another, I have written of Red 40 & the Last Groovement for eons. How far – so far – have you been able to take that character? Where is she now, if we think of her life as stages or chapters, now that you are onto something else?

MS: It has been a real evolution! I didn’t realize Red 40 would take off at all when I made the band, and I still feel like I’m chasing her down. Certainly the political and cultural moment has landed Red 40 in a very different place. Like many of us, I saw Red 40 in a country that would elect Hillary, not the misogynist piece of shit we’re dealing with now. There’s actually a quote I read recently that spoke to how I feel about Red 40 at this moment:

“Mocking the men who hurt us – as mockable as they are – starts to feel like acquiescing to the most condescending of cat calls, ‘You look better when you smile.'” Because even subversive sarcasm adds a cool-girl’s nonchalance, an updated sharper version of the expectation that women forever be pleasant, even as we’re eating shit.

“This sort of posturing is a performance that requires strength I do not have anymore. Rolling with the punches and giving as good as we’re getting requires that we subsume our pain under a veneer of ‘I don’t give a shit.’ This inability to be vulnerable – the unwillingness to be victims, even if we are – doesn’t protect us, it just covers up the wreckage.”

That’s-from SEX OBJECT by Jessica Valenti. So yeah, the way Red 40 operated before November 2016 doesn’t feel authentic in this moment. It can feel exhausting to pretend like I’m impervious to the world. I think there’s a way vulnerability and the present truth of the moment can and is seeping into Red 40 as a character and into our music. By venturing into the other end of the character spectrum while making “Sensitive Nature,” I’m learning’s Red 40 next chapter.

TK: Could you have told Due to the Sensitive Nature through Red’s eyes…why or why not? Please give me a new example of something “Martha” is doing or singing that “Red” should or could not?

MS: Great question. While making this show, I have been doing some deep-diving into my past experiences. One sticks out to me in the lineage of Red 40: In high school, the baseball team made my ass their mascot. They would follow me up the stairs, giggle and smirk as I walked by, playing this game of cat and mouse, but without my active participation. Horrible, right? Yes, super horrible. I was embarrassed, ashamed, and angry. Also, can I just say, as a high school freshmen, all I wanted was to be liked. The promises of heteronormativity and a boyfriend with a car were very seductive. But I felt shitty about enjoying something I knew was bad.

So I have this fantasy at some point that I could’ve turned around in the cafeteria, stuck out my ass, reclaimed the experience, and made myself an agent in the interaction, not the subject of it. That feels like the spark that created Red 40. Reflecting back their toxic masculinity by showing them the monster it turned me into. Some of that flavor “is” actually in Due to the Sensitive Nature. But your question gets at something else, which is the process of writing Red 40 songs vs. DTTSN. I write songs for Red 40 from the character’s point of view and have been writing DTTSN from an autobiographical standpoint. All filters were removed. I had to let go of the Red 40 character, or really any character, in order to access some of my memories in an honest, authentic way.

TK: When and why did the ache of high school come up again – enough so to forge a performance piece out of it? Martha Stuckey | photo by Travis Chantar | courtesy of the artist

TK: Considering that teen scenario: did you ever allow it to happen again in adulthood, and what did you do differently?

MS: Yeah, what do they get say, there’s only so many stories in the world? Most stories fall into one of a few categories. So those categories come to say a lot about human existence. I think that’s why I was drawn to this piece being a modern myth or fairytale. The format allows me to hold a handful narratives at the same time and also shed light on a few others potentially. To answer your question more specifically though – in relationships, in those familial situations I mentioned, in high school, when I had a crush, etc. – I still fight to this day to not disappear in the eyes of someone else, to get smaller, more palatable.

TK: How did you write/rehearse Due to the Sensitive Nature differently than you might your usual work/other work? How will this piece appear on stage different than a Red 40 piece?

MS: Sensitive Nature has been a much longer process – almost a year – centering on one performance, whereas Red 40 is a bunch of shorter processes strung together. Also, I’m used to processes where a bunch of folks work together in a room to make something. This has been very internal and private because of the length of the process I.e. hard to pay for the rehearsal space and the people to make it with! This piece is more of a saturated theatrical world than a Red 40 Show. There’s a narrative through line and more stage elements like classroom projectors and onstage transformations/costume changes.

TK: You are scoring this new piece with members of the Last Groovement…do they find it odd that this is not theirs?

MS: You’d have to ask them! But they have been involved in writing arrangements and creating scenes and such. Matteo Scammell and Ben Diamond are longtime collaborators of mine so whether they contributed something directly or indirectly their fingerprints are on the piece.

TK: What was the first song or movement that you wrote for Due to the Sensitive Nature that would have steered the rest of the piece?

MS: “Blue Jeans,” which isn’t in the final piece, actually. But it was about a high school crush that was realized later in adulthood. It comes from a very tender part of my memory and was an access point into other memories and the steel guitar that is still playing in the show makes it so earnest. Singing that song felt very different than any Red 40 Song. I had to let myself be sweet! Let down the armor, so to speak.

TK: It is my understanding that Due to the Sensitive Nature allows you the solo artist to be naked and without any filter. With that…. Do you believe it may be hard to slip into Red’s skin again and what is next after the SEI?

MS: No, Red 40 is so pleasurable to do (regardless of the afore mentioned complications) and the music really pulls the character and the voice out of me – necessitates them. This show being in the mix is part of an evolution in songwriting and me as a person and as a woman so I think in a way, everything is different… it’s like the show is a ritual and I’m coming out the other side changed… not necessarily better or worse. Just different and still evolving.