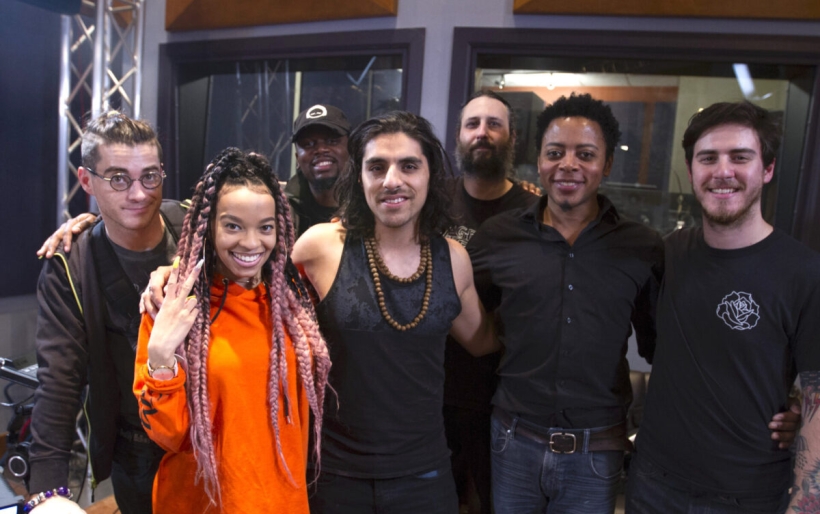 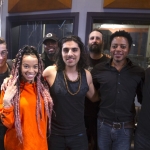 A lot can change in seven years, and for Noah Selwyn, it’s been quite the journey from his earliest incarnation of Agent Zero to the collective of musicians joining him in WXPN studios this week.

In preparing this session, I found myself doing a deep dive on the Philly electronic dance musician’s Facebook archive of live photos and gig flyers, and discovered an early 2011 shot of him and three peers in We Are Psy-Fi productions on a rooftop near the Kimmel Center. Selwyn’s hair is short and spiky, he was mostly clean-shaven, and wore a button-down shirt and tie. It appears this was his standard stage attire at the time, and it seems like he often took the stage solo as well. Today, he’s got long, flowing and vaguely hippie-ish hair, rocks a beard, and dresses more casually to perform, including a stylish bead necklace worn during his Key Studio Sessions performance. And he has a band that takes the stage with him.

Beyond appearances, the more significant change is Selwyn’s music. It was always bright and upbeat, a bubbling concoction of trance, house and dubstep that he honed studying under Slit Jockey Records founder Starkey. Though his skill as a producer has certainly advanced over the past five years, you can still hear the Agent Zero of today in the Agent Zero of 2013’s EP Sound Sorcery Volume 1 — body-moving BPMs, ecstatic synthesizer tones, progressive rhythms that follow a dramatic ebb and flow. Selwyn always had the chops to make Agent Zero work in the DJ realm — potentially a new generation’s Pretty Lights or Quantic — but the big change that between then and now is his pop sensibilities developed and his ambition grew.

I first caught on to Agent Zero during my Items Tagged Philadelphia project last December, where I came across his recent release Ones & Zeros and praised its ability to turn EDM forms and formulas into pop anthems, particularly the song “Fever,” featuring commanding singer Kachina Azè. In the studio with the Agent Zero live band, we get an incredible performance of that song, with Azè on hand to perform live vocals, and a lot more.

Backed by guitarist Jason Luber, sax player Rob Potter and drummer Ryan DJ Ha — and Selwyn overseeing proceedings like a conductor from behind his MIDI controller — Azè paired up with rapper Sammy Daboi for a fierce performance of the high-octane call-and-response sci-fi party jam “Suspended In A Sunbeam,” also from Ones and Zeros. For an atmospheric anthem of a more reflective sort, singer Spenser Michaels stepped to the mic to absolutely crush a performance of “From Stars,” a song from Agent Zero’s 2015 EP Mechanisms.

All of this sets the scene marvelously for the forthcoming Agent Zero project, The Awakening, which drops on Friday, the 4th of May. Selwyn and the band will bring their live show to the Johnny Brenda’s stage in celebration, not only of their own latest and greatest work, but also that of their friend and peer Adrian Palashevsky, aka goldenSpiral, who is also releasing his new Cosmic Servant project the same night.

Get tickets and more information on the gig at the XPN Concert Calendar, and listen to Agent Zero’s Key Studio Session in full below — kicking off with an instrumental return-to-roots of sorts, fusing the atmospheric vibes of “Mechanisms” with the funky swagger of “Smooth Flow.”