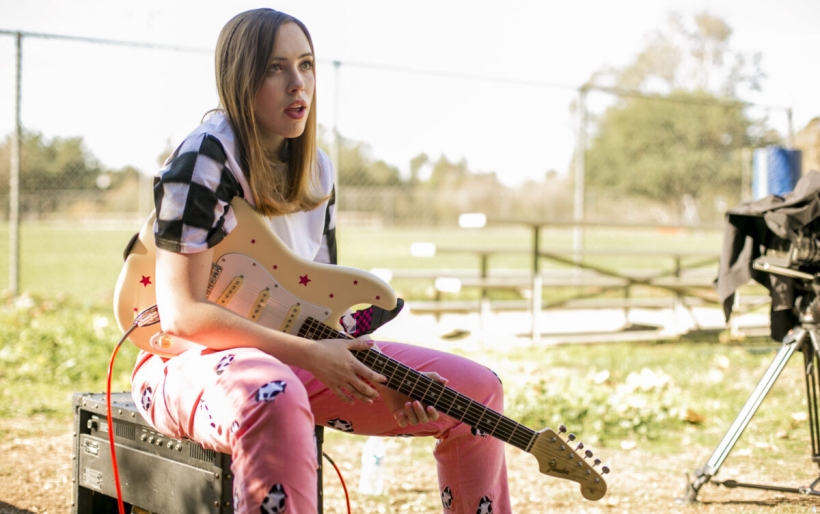 Soccer Mommy | photo by Kelsey Hart | courtesy of the artist

“Only what you wanted for a little while,” sings Sophie Allison, the quietly dominant voice of Soccer Mommy, in the chorus of the first song of her new record, Clean. It is a line that, like most every song on the excellent output, catches a moment, a vulnerable one where the singer can’t help but admit the nature of fleeting infatuation. It is a familiar feeling for many, a time where the love we thought was alive suddenly dries up, putting into question everything that came before. It is these kind of moments, sweet and cutting, that make Clean such an impressive record, a record that will hold onto listeners for far longer than, “a little while.”

Sophie is bringing this unique style of dynamic intimacy to Johnny Brenda’s tonight for a sold-out show, and in advance of it (and in between tour stops), I got a chance to speak to her by phone about Clean and her biggest headlining tour to date.

The Key: First off, I want say how much we love Clean here at The Key, also how excited for you to headline Johnny Brenda’s. How has the tour gone so far?

Sophie Allison: We started back in February and opened for Phoebe Bridgers for about a month and then went straight to Europe and then back to the states for South By Southwest so we’ve been going for a while now. It’s not the biggest we’ve been on as a band but it’s definitely the biggest one we’ve done headlining. It’s going really well overall.

TK: I imagine you are getting to the point where you are becoming more comfortable playing the songs in a live setting, how has this tour changed and morphed them since you first put them to record?

SA: It was a little nerve-wracking at first, but once you play the first couple shows and a lot of good crowds are coming out it has a way of taking the nerves away a little bit. Hopefully they will just get better and better and tighter and tighter as time goes on. I feel like they have already changed for us just because we have been playing them for a couple months now and the way we play them live is slightly different from on the album. There are things you have to tweak here and there to make it sound more like the record, but it’s actually a little different. We work to keep the same impact but in slightly different ways. I kind of imagine it in a live way now so when I hear the record it is kind of different.

TK: You’ve been on the road most of 2018, do you think all this touring has any effect, good or bad, on the songwriting?

SA: I think I definitely write more at home. It’s just harder to get time on the road. It’s not necessarily that I don’t think I could because sometimes I do get an idea on the road and write it down or get a chord progression that I like and keep it in mind but it’s just hard to get time to actually focus on writing. That being said, just travelling inspires me to write.

TK: You mentioned the writing process, how is it going from you alone with a guitar in the initial stages to what we hear on the record and see on tour?

SA: I think I do it the same way I did for the last album in terms of thinking about playing it live. I still think I’m just going to sit down with my guitar and write songs and just kind of worry about the production later. Basically, I write all the songs and bring them to the band after the record was already made. I write them with just the guitar and a vocal, then we go into the studio and add a bunch of stuff and then we just kind of try to figure out the live arrangement

TK: In keeping with that, is there a thought when arranging the record of balancing the completely solo songs with the full-band efforts?

SA: It is definitely a intentional mix. Any record needs dynamics for sure and I think all the ones that were solo or have solo parts were broken down that way for a reason, often to make it more intimate. I think it creates for a good push and pull on the record.

TK: Clean is the first record you’ve done with a major label, namely Fat Possum, how has the experience of jumping from almost completely DIY recording to full studio work gone? Was there any fear of a loss of control?

SA: Before this, I’ve never really made an album start to finish. Everything before this was kind of more demos and thrown together. It was never anything that was meant to be a specific album. Sometimes I would take an old song and throw it in. It was always kind of random the way it came together. This was a lot more of a specific album. My old Bandcamp stuff would be out in a matter of hours from start to finish. I would finish it and upload it. I would maybe wait till I had three of four songs which would take maybe three weeks, probably not even that long. So this is definitely a longer process.

Luckily, it didn’t feel like a loss of control at all. We had very similar ideas to what I wanted. Even if they had an idea that I wasn’t thinking it all kind of follows the big picture sound that I wanted. It was helpful because it is probably more difficult for me to picture all the little things that go into it. I was more worried about the overall sound I wanted.