Donald Glover knows our ‘America’ loves Black Art and hates Black Lives. Can he make America learn something else? - WXPN | Vinyl At Heart 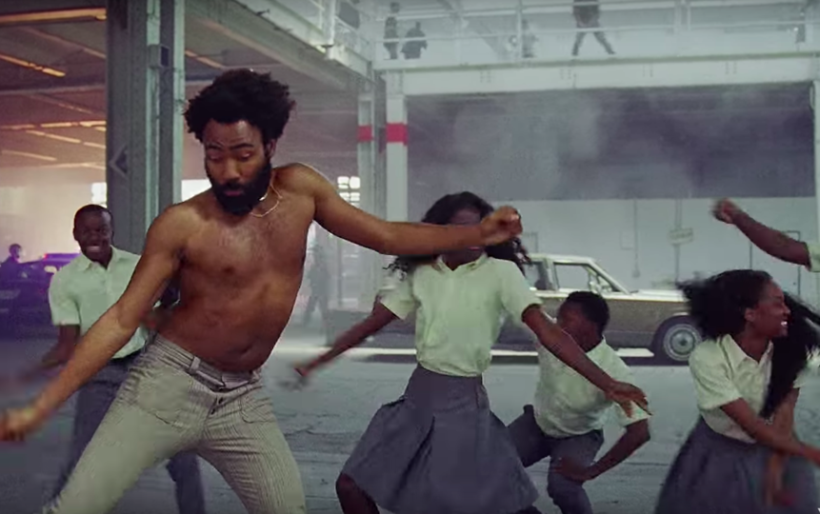 Childish Gambino’s This Is America | still from video

Donald Glover knows our ‘America’ loves Black Art and hates Black Lives. Can he make America learn something else?

The most jarring moment of the music video for Childish Gambino’s “This is America”—the visceral clip for the unsettlingly heavy gospel-meets-trap song that garnered over 105 million views on YouTube as of this writing—arrives at the 1:39 mark. The preceding 98 seconds of irreverent dancing, sudden homicide and Jim Crow allegory abruptly pivot to ten members of a Black church choir joyfully singing “Get your money, Black man!” before Gambino picks up an assault rifle and quickly shoots all of its members to death. “This is America,” he raps into the camera, the blandness of his expression caustically juxtaposed with the weapon of war he then passes to a cloth-bearing child.

The scene calls to mind the 2015 murder of eight church parishioners and a pastor, all Black, by a self-described White supremacist in Charleston. It was one of the many quick moments, woven into an inseparable tapestry of joy and violence, that fans and critics alike dissected soon after “This is America” premiered on May 5. Nearly every killing, dance move, assault, camera pan, galloping white horse and cop car was a nod to possible symbolism. Every repeat view reveals new angles to consider, layers to peel back. But to see most of them, you have to withstand the violence—one that America regularly witnesses and survives as images of mass shootings, police killings of people of color and military aggression flood its timelines and TV screens.

This violence, predominantly committed against the video’s Black actors, prompted accusations that Gambino was minimizing or mining the spectacle of Black death for entertainment. Video producer Ibra Ake sympathetically addressed this critique in comments to WNYC Studios:

Our goal is to normalize Blackness, and I feel like we don’t really think of it in that editorial way. It’s, like, this is how we would like to dance, but we have to be aware of the danger and the politics of how we’re perceived and the implications of the history of how we were treated. There’s all this math you’re constantly doing expressing yourself. We’re trying to not have to explain ourselves to others and just exist, and not censor what our existence looks like as people.

Gambino, who thrives in the non-musical entertainment world as the multi hyphenate artist Donald Glover, definitely understands the sentiment that Ake (who also writes on Glover’s surrealist FX series, Atlanta) expresses: that Black artists, in creating something imbued with the celebratory joy that Black communities nourish in the face of oppression, must do so under the gaze of that oppression.

Glover acknowledges how much his art speaks to that gaze, even when it tries to subvert White audiences’ expectations or speak to Black audiences who don’t often see themselves represented with nuance or humanity. He explained as much in an interview with The New Yorker—a telling place for a famous Black artist to relate these thoughts—about his Emmy-winning Atlanta:

“If ‘Atlanta’ was made just for Black people, it would be a very different show. But I can’t even begin to tell you how, because Blackness is always seen through a lens of Whiteness—the lens of what White people can profit from at that moment. That hasn’t changed through slavery and Jim Crow and civil-rights marches and housing laws and ‘We’ll shoot you.’ Whiteness is equally liquid, but you get to decide your narrative.” For the moment, he suggested, White America likes seeing itself through a Black lens. “Right now, Black is up, and so White America is looking to us to know what’s funny.”

Glover keeps most of his creative motivations under wraps, and has not publicly commented about “This is America” all that much. But statements like the one above illuminate how much Glover knows about how this country works, and his output indicates that he will take multiple approaches—as varied as the art forms he’s mastered—to breaking showbusiness’ White-centered views on what’s good.

If “This is America” at least partly confronted his White fans’ ability to love Black art while disregarding Black death, then his Saturday Night Live hosting and performing gig (set for the same day as the music video’s debut) was Glover showing that same audience, “Watch what I can do in your house.”

Glover strolled into this gig, on a show that historically struggled with diversity in employment and perspective, with an opening monologue satirizing his inability to get an SNL job as a younger comedian. He leveraged the clickbait-feeding thrill of Kanye West’s public alignment with Donald Trump into brilliant commentary about our harmful obsession with celebrities’ social media posturing—a concern that harkens back at least as far as his album Because the Internet. He’ll likely earn untold money for playing Lando in the upcoming Han Solo-focused “Star Wars” film, but he sent up the lack of Black people in space epics through another poignant sketch. And while he took much of the violence away for a live performance of “This is America,” he turned the 30 Rock stage into an intimate barbecue while performing the ecstatic “Saturday.”

The dual totems of the “This is America” video and the SNL episode demonstrate Glover’s talents for confrontation, subversion and celebration—often in one piece of art. Here’s hoping he continues to empower the joy of the marginalized, speak truth to the oppressors and open doors for Black innovators across industries for a long time.

Childish Gambino returns to Philadelphia this summer, headlining the Wells Fargo Center on September 18th. Tickets and more information can be found at the XPN Concert Calendar.