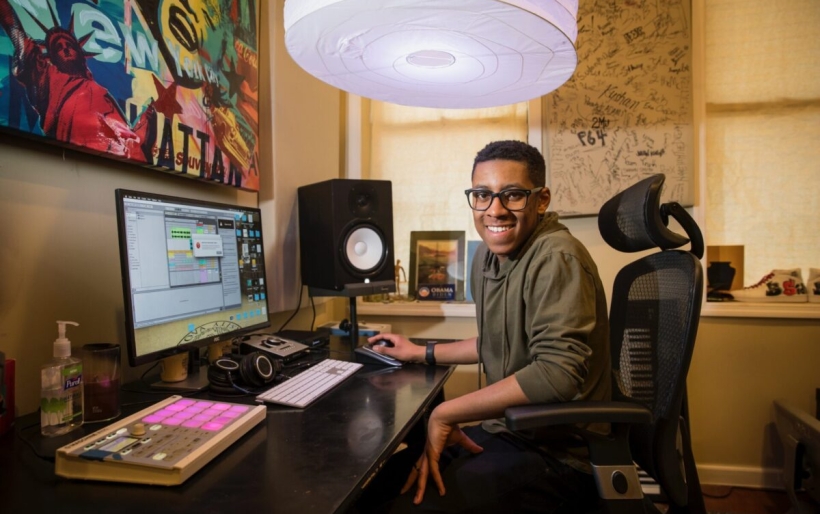 From TyDolla$ign to Jazmine Sullivan, Benjamin Thomas’s portfolio as a music engineer spans to some of the biggest names in the industry, and he is only twenty two years old.

Whether working on location at Studio Breed in Philadelphia, or in his own home studio, Thomas — iamBNJMIIN in his credits — is the type who gives his all to the music he mixes.

“You can work smarter and harder, but if you choose to just work smarter; I’m just going to outwork you.” Thomas says.

Thomas is a Harlem native, and moved to Philadelphia when he was in early teen years. This was around the time when he was also introduced to music. “A lot of people would say ‘Yeah,  I remember this song when I was five,’” he says. “And I don’t, but my mom liked CDs a lot.”

Instead of listening, he would take his mother’s CD collection, and use it for room decoration.

Thomas admits that Rock Band and Guitar Hero are really the two things that introduced him to music as a child. After learning to master those video games, Thomas began playing bass in the sixth grade, but didn’t learn about engineering until later when one of his junior high teachers introduced him to it as a hobby.

“I got thrown into the fire in 8th grade when I was told to run this twelve microphone setup,” Thomas recalls. From there, the music hustle never stopped even as Thomas began his college career in Finance.

With dreams to eventually work on Wall Street, Thomas applied to Finance programs around Philadelphia before deciding on Temple University. Although Thomas was enrolled into the finance program, and employed at First Trust Financial by twenty years old, he admitted that he wanted to do pursue his passion.

“I had an epiphany; I didn’t want to do finance, I want to [be an engineer].” Thomas says.

After his realization, Thomas committed more than he had ever before. He had been utilizing the studio he built at his home, and networked enough to get into the rooms with people he once looked up to, like music producer Ryan Leslie.

Taking the leap to choose his passion has paid off, as Thomas has worked with veteran R&B singer Brian McKnight, who was nominated for two NAACP Awards for songs that Thomas engineered.

Thomas credits his major engineering opportunities to the people in his network. In July of 2016, while interning at Studio Breed; Thomas was working with an artist in his apartment before receiving a call from his mentor; Grammy nominated music producer and Studio Breed owner, Anthony Bell.

“He’s like stop what you’re doing, you need to get here by nine o’clock,” Thomas recalls.

“Ty Dolla$ign just booked out 12 hours, we think you can do it. No one else is around, this is your chance.”

Thomas took the opportunity, and recorded six songs with the rapper, TyDolla$ign that night. One of the songs recorded includes, “Paris (Who Taught You)” which features R&B singer, Jeremih. A similar situation happened with Brian McKnight.

“It’s so cliché because if you go and you listen to any other engineer, and they talk about their career, it always happens like this,” Thomas says. “No one was around, and somebody wanted to keep working, and that somebody happened to be Beyoncé. It always happens!”

Bell introduced Thomas to Jazimne Sullivan and was able to work on music with her.

Thomas was surprised to find out that the song he engineered for Sullivan and Bryson Tiller, the Keywane-produced “Insecure,” was going to be on the hit comedy HBO series, Insecure starring Issa Rae and Yvonne Oriji. The song went on to be nominated for a Soul Train Music Award and a NAACP award.

“When you work a lot, you can’t get caught up in ‘When is this song going to come out? When is this going to happen?’” he explains. “I just work, and in this point in my career, I’ve recorded probably recorded four or five hundred songs, if not more. I don’t think about them after they’re done.”

After traveling back and forth from Mount Airy throughout his freshman, sophomore and junior year of college to work on music; Thomas was able to focus more on his craft while still keeping up with his finance job. Thomas’ priorities with work often left him outside of social gatherings, but he says he wouldn’t change anything for the life he’s living right now.

“There was not a lot of sleep back then.” Thomas chuckles. “We all make sacrifices.”

That work ethic has gotten Thomas many places, including working with his close friend, Chill Moody. The two co-founded nicethingsMUSIC, and Thomas mixed “My Own Light” by &More, Moody’s new project with singer Donn T. But they say their bond is deeper than the music they produce.

Moody and Thomas have known each other for four years, and met at a Grammy event called ‘In The Mix’ back in 2014. Since then, Thomas has mixed everything Moody has recorded in the last four years.

Moody says what separates Thomas apart from other music engineers is that he is not afraid to do the work.

“His dedication that he puts into his craft [makes him different], and the fact that he [cares] about what he’s doing sometimes overly,” Moody says. “He just wraps himself into his work; he’s engulfed in his work. That dedication kind of sets him apart from everybody because he’s always prepared.”

Thomas can’t help but to agree on his relationship with Moody.

“He’s my older brother, it’s deeper than music,” he says. “Me and Chill have traveled almost across this country together. We have shared tiny hotel rooms in New York in Delaware, [and] in Texas. All of this is because of him.”

The team behind NiceThings MUSIC includes other members like entertainment lawyer Jason Berger, who believes Thomas will be a force to be reckoned with.

“The kid is so bright and talented,” Berger says. “He can do anything he puts his mind to. I think he’s going to have to make some tough choices because he’s good at so many different things.”

Berger thinks Thomas’ skillsets continue to serve well for him and the others he is around.

“I’m not admittedly the best at technology stuff, and all I got to do is give him a call and whether it’s helping to solve a YouTube problem or getting our website up to speed, or social media for an artist; he’s usually our first line defense.” Berger says

Those technologically savvy skills come in handy as Thomas says it’s his upper edge with being so young in the industry.

That niche happened to be technology, so working with computers and different software has served Benny well in his career so far. Thomas is ready to work, but very aware of what keeps his engine going. He credits his willpower and determination to keep working from none other than his mother and grandmother.

Although Thomas’ long-term goals include winning a Grammy, he says that is not all he is focused on, and is flexible to change.

“I love music, but I love audio even more,” he says. “That’s why I worked on every genre possible, from the streetest hip hop to classical records, I’ve edited podcasts. I’ve worked on TV shows; I’ve worked on short films; anything audio related.”

Yet, Moody’s perceived future for Ben is very clear.