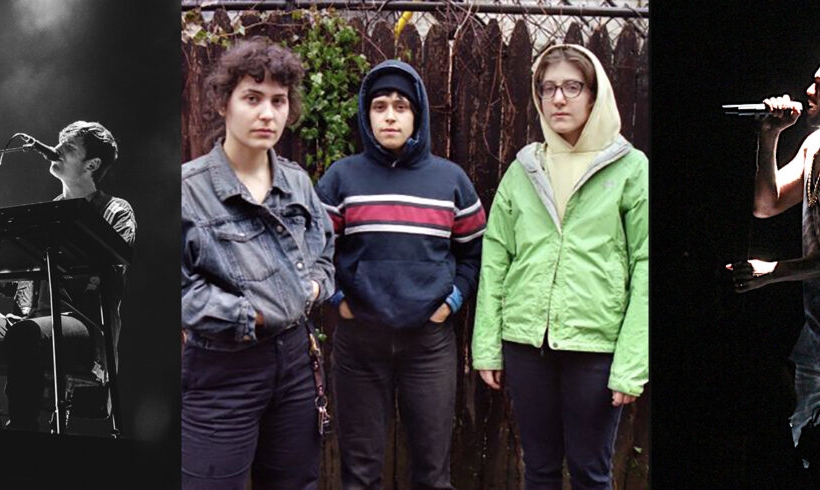 This week’s song selections from Team Key include music that reminds us of a low-budget indie rom com, possibly one involving robots, a minute-long blast of unconventional energy, a sensitive offering from a complicated and confrontational artist, and more.

“Don’t Miss It” is one of the latest tracks British crooner James Blake released this year, along with his two-phrase guest contribution to the ubiquitous Kendrick Lamar hit “King’s Dead” and his own breathy, glitchy vignette on “If The Car Besides You Moves Ahead.” Blake’s vocals on “Don’t Miss It” continue to be subtly glitchy and fluttery, and vaguely describing Blake’s past and present. One of the best things to come out of the track’s release, other than the gift of new music from the oft-reclusive Blake, is the singer’s statement on the “sad boy” label historically used to describe his music. Read the full statement on Blake’s Twitter, and check out the latest stunner from Blake below.

Boy Pablo surfaced on my radar accidentally, and his indie pop quality is paired with a sweet, sincere smile and slack, shrugging attitude. “Losing You” features an infectious, bouncing bass line and jazzy keyboards that sound almost like a church organ. Paired with a grainy pastel-colored videos, he could be writing the soundtrack of a low-budget indie rom com.

The Goldlink-esque sounding track “Golden” is a recent find for me. It’s an infectious feel-good track that’s a perfect listen when you’re having fun in the sun. There’s just something about Oakland rapper/producer Elujay’s smooth R&B vocals layered on top of this funky, upbeat melody that gets your body groovin’.

Mr. Fingers — “Can You Feel It?”
My search for songs that could fill the void left by Azealia Banks’ “Anna Wintour” led me to discover this 1986 house classic; a track that proves once and for all that a robot really can learn how to love.

Palberta – “Sound of the Beat”

The only lyrics are “Hey! That’s the sound of the beat! I can hear it now, that’s the sound of the beat” and it tops out at one minute, but it perfectly captures Palberta’s catchy-but-not-in-the-way-you-expect method of making music. The trio of Anina Ivry-Block, Lily Konigsberg, and Nina Ryser all sing and swap instruments, resulting in their idiosyncratic and off-kilter punk music. Their sophomore album Roach Goin’ Down is out today.

This week I discovered the debut album from Spanish folk singer Rosalia called Los Angeles. The song “De Plata” particular drew me in. It features aggressive Flamenco feeling guitar cords and an intense echoing that go oh so well with the vibrato in her vocals. Since I am a whole year behind on knowing this album exists, I will definitely be making up for lost time by playing it on repeat this week.

This single from Snail Mail’s new album Lush is the kind of dreamy and hazy tune that’s perfect for long summer days. It matches the contemplative, heartachey tone of the record, but it’s the quietest, most delicate track, swapping fast-paced indie rock for slowed-down, almost folkish acoustics that will make you hear Lindsey Jordan’s voice in a new light. They play Union Transfer on July 14.

I really needed to know what all the ye hype was about. I’m not the person to ask for an educated opinion of this album, but what I can say is that “Violent Crimes” plays like a major redemption song for me, because Kanye West is such an anomaly in pretty much every sense of the word, and my opinion of him hasn’t always been positive. But I appreciated this very real homage to his daughters. It scared me to listen to it, because he speaks about how the dangers that young women face all the time are real, and he recognizes that he’s both part of the problem just by being male as well as an advocate for change just by being a father. It hit home.