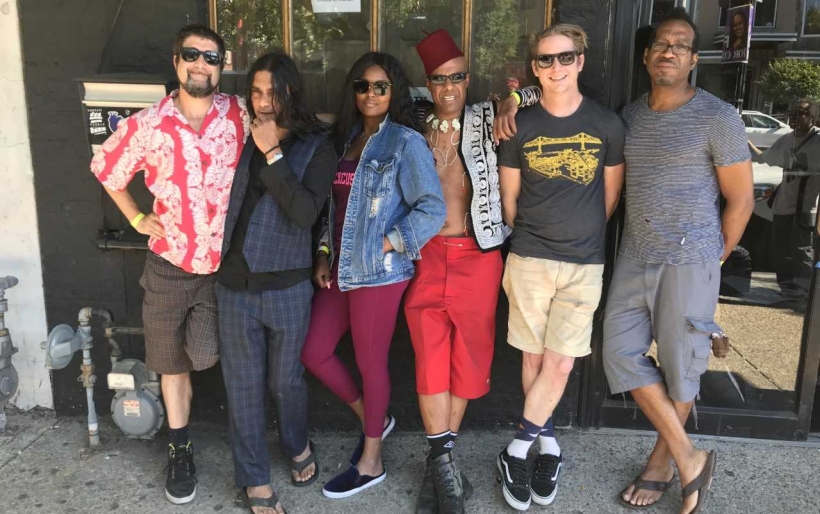 This story is so juicy, and zesty, it falls off the bone and melts in your mouth: a conversation with occasional Fishbone-r Angelo Moore, Ween drummer Claude Coleman Jr., Ashish “Hash” Vyas  of Thievery Corporation fame, and the rest of the sampladelic-soulful Brand New Step brain trust – in one car – driving out of New Orleans and into Atlanta. Their mission: to get to Philly by June 15’s Johnny Brenda’s gig in order to play its new hot jazz-funk cut “Pendulum Swings” and other songs from its sophomore album due out before 2018’s end.

The Key: Angelo and Claude, you have both been in bands whose paths have surely crossed. How crossed?

Angelo Moore:  Yes, they have. Years ago, I sat in on a Ween tune, playing saxophone, during a Vegas show. “Your Party,” right?

Claude Coleman: You played the part that David Sanborn did on the record, and you did an admirable job.

AM: Well, thank you, man. That was my first night on the golf course, so to speak.

TK: So why did you two link up for this newer iteration of Brand New Step, and why at this point in both your lives?

CC: I came into it after it had been already formed by the producers. I don’t know, really. Angelo is the man, and I have been a fan of his as long as I‘ve been playing drums. This is a thrilling project and Angelo – to me – is like brother from another mother.

AM: That’s right, damn it. Yeah. I wanted Claude to be part of the process because – well, it’s funny. I didn’t know anything of Claude LIKE THAT. Chris Jansen is the dreamer of this outfit who imagined how all these parts would fit.

[Chris Jansen jumps on the phone]

Chris Jansen: I’ve been a huge fan of Ween and Claude’s forever. These guys together are a nice mix, even if I didn’t know they would be before we started.

TK: If you’re the guy who dreamed this stuff up, what was the sound in your head like at first?

CJ: We wanted to do something with Angelo, but totally removed and different than Fishbone. Just something fresh and modern. With different players.  Everybody had to fit.

TK: How would you two say that you act differently in this context – the context of Brand New Step – than you do that of Ween or Fishbone? Angelo I know you’re playing more sax here.

AM: And theremin, don’t forget the theremin. This band is more contemporary than what I do with Fishbone. When I talk about Brand New Step, I always call it the band with the disco ball hanging over it. I mean, along with keys, we’re incorporating tracks, which is something I don’t do anywhere else, but this band. That’s what makes it – hold up, hold up – a brand new step for me, right there.

CC: You know what? As a drummer, it’s the same role, only different styles and flavors. But, with Brand New Step, it’s more focused rhythms. And what is really funny. I wind up playing in bands with front men who are closet drummers. Look at Mickey and Ween. Look at Eagles of Death Metal and Josh Homme. I’m always hooking up with cats like that. It’s an easy fit. And Angelo is very specific as to what he wants for this music to work right.

TK: Angelo…I don’t think of Fishbone as UN-contemporary. Were you looking for something such as this before these guys?

AM: No, before Brand New Step I wasn’t considering that at all. Contemporary music, radio hits? I don’t think about that. I just always want to make dynamic, even dangerous music; music that is a challenge.

TK: Hey, I just realized, are you in the same van?

AM: We are. But, it’s roomy. You should see Fishbone’s van. Now that’s cramped.